Quests:
"Into the Darkness"
and
"Sword for Hire, Soul for Hire."
Two Worlds I begins inside the ancient stone temple of Throglin, in the mountains in the northern region of Thalmont. Throglin Temple is one of the very few places in which the game forces you to dispatch a few foes, as part of the built-in tutorial: Two Grom (goblinoid) killers have invaded the temple and murdered some villagers, and the protagonist has been hired by the villagers to dispatch both of them. The closed stone gateway of the temple will never open unless this is done. Fortunately for pacifist-challenge players, however, these Groms happen to be the last living creatures the game forces players to dispatch until near the end of the game: Almost all other quests in the game can be completed in a nonlinear sequence without having to use violence. (Also, as a bit of a pacifist run "easter egg," players who obtain the level 15 Air spell "Ressurection" will also have the option to resurrect 100% of the villains the script ever forces players to dispatch, including these two Groms.)
After dealing with the Groms (which can be done by setting holding traps and letting the Groms run into them repeatedly, for those who prefer a "hands-off" approach), the gate will open, and you'll have the option to leave the temple and speak with the hunter Tago, who will reward you with gold and tell you that a stranger is looking for you in nearby Komorin Village.
Komorin Village can be found by following the winding mountain path down the nearby hill. (Two Worlds will automatically update your quest map and quest book every time a quest is received or updated, so each location you'll need to visit will be marked by a glowing dot on the map.) 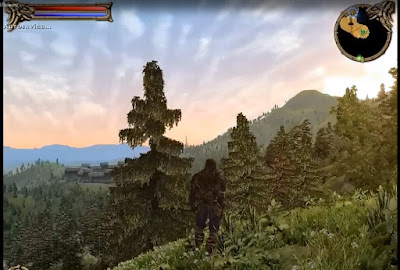 Now that you're free to explore, you'll be able to roam freely around the whole open world. You'll find lots of wild beasts like wolves, boars, and bears roaming, and they'll be territorial and try to chase you off their turf if they see you. However, the hero's running speed makes it easy to outrun any of them, and they'll soon give up the chase and go back to their own area after you outdistance them. (Better yet, you can use the "Sneak" skill to drop into a crouch and sneak past them without being seen, which will prevent them from attacking other creatures nearby like bandits or groms— though the Sneak skill can always fail if you get too close and are spotted.) 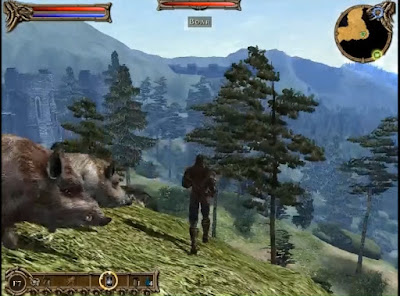 From this point forward until near the end of the game, you'll have the option to either continue the main sequence of quests tied to the main storyline, or postpone them for as long as you want without penalties. (No harm will ever come to the hero's sister from delaying, as both she and the hero must remain alive to serve the villains' aims.)
If you want to go complete optional side quests starting in the village, see the KOMORIN VILLAGE section (or any others based on whatever area you decide to go next).  For the quests that will advance the main storyline featuring the protagonist, his sister Kira, and the mysterious Gandohar and Reist Tungard, see the details outlined below on this page.

Either way, when you head down the path toward Komorin Village, you'll have to go past a small war camp full of hostile young Grom warriors who will attack you on sight if they see you:
If you want to use the "Sneak" skill, you can drop into a crouch and sneak past them without being seen, (provided you keep your distance while the skill is still at a low level). However, you'll probably find that the hero's innate running speed is fast enough that you can easily just run past most enemies in Two Worlds without being killed, unless you're in very close quarters, or facing lots of dangerous ranged attackers.
Note: If you want to be humane, make sure to leave the Groms in your dust as soon as possible, since the villagers will kill them if they chase you down to the village walls. (Otherwise, the Groms will soon give up the chase and go back to their camp if you run past them quickly enough, and most all other enemies in Two Worlds will do the same.)


Main Storyline Quests (from Komorin Village & Thalmont)
If you want to find out what happens next with the main storyline, you'll need to go meet Gandohar, the mysterious stranger Tago the hunter mentioned. Speaking with him will initiate a string of quests that advance the main storyline.

The quest names (as shown in the in-game questbook) are:
"A Dim Light"
"A Grim Message"
"No Room for Negotiations"
"A Crack in the Glass"
"The Twins"
"An Ace in the Sleeve"
"High Stakes"
"Talk to Ho."

None of the quests above will require any combat: You only need to talk to key characters at various locations to advance the storyline, and will be rewarded with valuable experience points for doing so in many cases.

Gandohar (Komorin Village)
You'll find Gandohar waiting for you just south of the main walled part of Komorin Village. He says he is a mercenary in the employ of a mysterious character named Reist Tungard, who has apparently abducted the hero's sister. Gandohar will tell you to go meet Tungard in a location known as "The Goat's Cave" in order to hear his demands. For completing this conversation the hero will also receive experience points. (Your map will also be automatically updated with a glowing point marking the location of the Goat's Cave.)
The Goat's Cave:
You will find Reist waiting for you in the Goat's Cave, where he will try to coerce the hero into working for him. (Ultimately, Tungard's objective appears to be to force the hero to recover a relic which his ancestors dismantled into multiple parts, and to use the relic to perform a ritual that only members of the hero's bloodline can complete.)
After this conversation, you'll again speak with Gandohar outside the Goat's Cave. Gandohar is an enigmatic character who claims to be a mercenary unwilling to betray his employer, but who also claims that he maintains some loyalty toward the hero's sister, and wants to help make sure she isn't harmed. He will suggest that you verify this by speaking with his sister's astral double through a magical system of menhirs called "Nodes."
Journeying to the Nodes:
The next set of quests will require you to travel to various misty stone circles where the hero is able to communicate with his sister. This will cause more interesting plot dialogues to take place, revealing details about the plotline, but there is no time pressure to complete these quests. (Kira will never be harmed no matter how long the hero takes to reach each Node, so there is no urgent need to complete these quests now, unless you want to do a lot of traveling early on in the game.)
If you decide to visit each node right away, it will be easy to travel around the realm on horseback if you steal a horse from some Groms or bandits. (Even at a low level, the hero can outrun foes even more easily on horseback than he can on foot— though it's best to keep some healing potions on hand in case an enemy archer gets a lucky shot in while you ride past.)
Return to the Goat's Cave (after visiting all the Nodes):
After you finish speaking with Kira at each of the nodes she tells you to visit (ending with the misty southern Node), she will tell you to speak again with Gandohar, who claims to be an ally despite his unwillingness to overtly betray Reist Tungard. Gandohar will again be found outside the Goat's Cave in the North, and several conversations with him and Tungard will reveal they're seeking a relic that only people form the hero's bloodline can use for a ritual needed to ressurect an orcish deity named Aziraal.
The protagonist claims not to believe in the efficacy of the rites, but will nonetheless have to complete the quests to retrieve the relic frame and four elemental relic stones, in order to try to negotiate for his sister's release. (Gandohar also adds an element of intrigue by proposing that the hero try to destroy the relic in the molten furnace of a city called Quidnar, so that they can secure Kira's release without completing the ritual...)
As for the actual tasks involved: Gandohar gives some clues about where some of the lost relic stones might be located, and suggests that the hero talk to an old man well-versed in lore to learn more. The old man's name is Ho, and he lives in the South. (Most of these conversations will reward the hero with more experience points after completing each one and advancing to a new quest in the sequence, so a low-level player will probably level up several times in this process.)

The Elemental Relic Stones:
The relic frame and four elemental crystals needed to re-assemble the relic are found all over the realm: The frame is in the north inside the Karga Fortress, the earth stone is an the haunted tomb of a dead king, the fire stone inside an orc stronghold of Gor Grammar, the air stone is hidden in a dragon's nest in a dead forest south of the Drakkar desert, and the water stone is in a serpent-infestded the temple of Yatholen in the city of Ashos. (See the separate sections about each area for details about acquiring the stones.)
Meanwhile, a large number of interesting side quests can be found all over the realm, and the majority of them won't require you to kill anyone or anything in order to solve them, so you'll be able to level up many times before you're under pressure to take on a particularly challenging quest (or one of the few quests near the end of the game that will require a challenging confrontation).