Covengor Village (labeled "Covenant Village" in some versions of the printed map) is found in the range of mountains west of Komorin, on the other side of the lake. You can also find the village of Rovant down the mountain roads to the south. 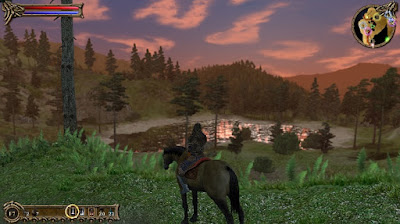 The Karga Clan's secret mountain stronghold is in the mountains north of here, but Covengor village is also a good place to visit early on for at least two sets of pacifist run subquests, which you can get from Dras Beclem in the village, and from Ash Lorus (found outside the Thief's Cave a short distance up the road south of Covengor).

There is also a Skelden House commander named Berud in Covengor village: He will ask you if you're a mercenary and offer a quest called "The Dangerous Rebel", to claim a bounty on a Karga Clan warrior named Conn Krannach. (Doing this quest would require killing Krannach as far as we know, so we didn't complete it. However, if you find Krannach's cottage a long way away in the eastern mountains of Thalmont later on, you can get a pacifist run quest from Krannach. See Eastern Thamont Mountains section for details. )
Dras Beclem, the Distiller & Merchant Guild Member:
Covengor is also home to a former distiller named Dras Beclem, whose trade has been hindered by the Skelden House instituting a ban on strong drink. As it happens, however, Beclem is actually still in business despite the ban, and will reveal that he has been shipping moonshine to the Skelden House quartermaster in the citadel of Thabarkin Town, found a little further to the southeast.

However, Beclem's trade (and that of his partners in the Merchants Guild) is now threatened by a bandit lurking somewhere along the road, who has stolen his latest shipment. Offering to help Beclem by getting rid of the bandit will initiate the subquest "Alcohol Trail," but you won't need to use violence to solve it:
All you'll have to do to is sneak up past the Thieves' Cave (sneaking to avoid being spotted by nearby wolves) and talk to the bandit, who is lurking near the woods, near the road above the cave. This particular thief is easily intimidated by a bit of manly talk, and will leave the area after surrendering all the stolen moonshine.
You can then return to Dras Beclem back in Covengor to be rewarded with gold, experience points, increased reputation with teh Merchants Guild, and a bonus of even more bottles of moonshine. (These can then be sold for more gold to the quartermaster inside Thabarkin Town, covered in its own section.)
The Thieves' Cave
Just down the hill (southeast of Covengor) from where the roadside bandit was lurking, you will also find a side road with the entrance to a cave. You'll meet a man named Ash Lorus standing near the entrance, and he'll tell you that he tracked a thief down to this cave while trying to recover a ring that the knave stole from his family. Lorus is reluctant to go in the cave himself, however, since it is infested with skeletons, and will offer you a reward to go reclaim it for him.
This initiates the subquest "Follow the Thief." (Note: This is a different thief than the roadside bandit who stole Beclem's alcohol shipment, even though they both look similar.) Inside the cave, you can sneak or run your way past the skeletons without fighting (and even more easily if you already have some magic spells that can freeze hostile foes in place).
The Thief & The Necromancer:
The thief who stole Lorus' family ring is named Tyco Thorn, and you'll find him in a large cavern at the rear of the cave.
Fortunately, like the nearby bandit who stole Beclem's moonshine, Thorn has no desire to fight with you: He will start the dialogue by asking how you managed to get past the skeletons in the cave, and then immediately acquiesce if you demand that he give you back the ring he stole from Ash Lorus. Thorn will then try to recruit your help against the skeletons:
It turns out Thorn hired a necromancer to summon the skeletons to guard his cave, but the creatures quickly rebelled on him and became just as dangerous to Thorn as to any outsiders. He will offer to pay you some gold if you take on the task of clearing the cave of hostile skeletons. This initiates the quest "Clear Out the Cave."

Magnesite Crystals
Regardless of your other choices from this point, note that you can also grab a number of magnesite crystals inside this cave (which might be important if you're still working on bringing magnesite to Ferid Redismos the Mage, at the teleport near Komorin village).

After Thorn gives you back the Lorus family's ring and asks you to clear out the skeletons from the cave, you'll have two options:
Option 1) The path of pure non-violence: Just ignore Thorn's request and let him solve his own problems, then run or sneak past the skeletons. (This will prevent you from being able to meet the necromancer Orm Varagor, but Varagor's quests yield little or no experience points or gold, so you won't be under any pressure to deal with the skeletons if you don't want to.)
Either way, you can give Ash Lorus back his family's ring, after which Lorus will thank you, and you'll receive more experience points and increased reputation with the Brotherhood.
Option 2) Clear out the skeletons and unlock the Orm Varagor necromancer quests:
If you decide to help Thorn deal with the skeletons, you'll need to decide on some "compromise" solution, depending on how you feel about the status of dispensing with undead in a pacifist run:
If you want to use an indirect option without fighting yourself, you could use Chaos Rage fire spells to make the skeletons fight each other. You could also lead the skeletons back into Lorus' own cavern and let him fight with them himself. (Caveat: In addition to taking awhile, this might endanger Thorn on the "Hard" difficulty setting— though you could always help him out with spells.)
Whatever your tactics, if you choose the anti-skeleton path: Talking to Thorn again will unlock another chain of subquests, starting with "Talk to the Necromancer." If you accept these, it will cause the necromancer Orm Varagor to appear at his hut along the steep mountain paths north of Covengor. (The hut will be there regardless, but Varagor will never appear there unless you do Thorn's cave-clearing quest first.)
After you deliver Thorn's message, Orm Varagor will agree that it is his duty to go back to the cave to make a "minor change" to assist Thorn, but he will also be impressed to learn that you managed to get past the skeletons yourself, and suggest you do a potentially dangerous quest for him also: This will initiate the quest "Bring Me Some Taint" to go and retrieve shoots of necromantically-tainted plants from various graveyards found around the world map. (Varagor will tell you that he wants the taint shoots for research to discover how to escape into another dimension, by the way, so you won't have to worry about him killing anyone if you decide to bring him the shoots.)
The taint shoots can all be collected easily without fighting (even if the graveyards you find around the map are all full of hostile undead), and are also easy to spot from a distance, since the taint causes a brightly glowing shaft of ghostly light to emanate from each shoot. When you bring Varagor some more shoots, he'll be pleased with you and reward you with a necromantic spell card and reputation with the Necromancers, after which he'll announce that his latest research will require even more shoots.
Bringing Varagor his taint shoots leads to somewhere between 3-5 quests in all, but as far as we can remember there is no experience or gold rewarded in any of them, even though they're easy to complete without violence. (Gaining reputation with the necromancers will enable you to be let inside their secret Enclave in the far south later on, and meet their leader "The Flame," among others. This is interesting, but did not provide any more pacifist run quests that we discovered.)

Rovant Village & Alchemy Training
If you want to learn the valuable skill of Alchemy, you can find an alchemy trainer relatively early on by traveling a distance over the mountain roads southwest of Covengor, to the small woodcutting and hunting village of Rovant.
You can find a man named Baler Witur in Rovant (wearing a black mage robe): He doesn't give a quest, but can teach you the powerful skill of Alchemy for a very reasonable sum, and is probably the earliest trainer you can find for that particular skill. (He can also teach necromancy and the iron skin skill.)
As soon as you learn the Alchemy skill once from a trainer, you can choose how many of your own skill points to invest to increase the potency of your potions. Many potions granting you temporary increases to your ability scores can be brewed from combining reagents (herbs, minerals, and other items), but if you combine only those that grant permanent attribute increases (e.g. Centaurium for dexterity, or Saffron and Pearls for strength, among others) you can permanently increase your basic attribute scores as soon as you drink the potion.