The desolate Broken Blade Region is where you'll have been sent if you already visited the secret Guild on the Forsaken Coast. If you're coming from anywhere near Port Kuudad or the Forsaken Coast, you'll have to do some fairly long journeying, so we'll also cover the Eastern Fellpine Forest, followed by Broken Blade, and an addendum at the bottom on the western Fellpine Forest and the adjoining northern map "Cape Sorrow" in this section.
Before making a long journey, however: Note that if you're doing a zero kill run and aren't otherwise interested in treasure-hunting in these areas, you do not actually need to visit this region at all, since you won't be able to complete "A Meeting with Sparrow" without being forced to kill (for reasons explained in the Broken Blade section below). If you want to claim the Crux of Fire as soon as possible, you'll have to visit Hammerlorne Mountain and Durnore instead.
The only side quests to solve in this region (from Hunter in Wolfenwood and the Druid in Port Kuudad) would require slaying between 1-23 giant beetles called "Goliath Borehoads," so we skipped these, but you can still explore and hunt for treasures on both these maps without any violence.

The Eastern Fellpine Forest
You can reach the Eastern Fellpine Forest by either traveling west of the Northwest Kessian Basin (west of Port Kuudad), or north from Wolfenwood. It's a fairly desolate area, and in this south you'll find a large open flatland infested with fast-moving and dangerous "Devilmanders" that will attack you on sight, and may be hard to evade without haste spells or potions.
Further to the north there is a river inlet that winds more or less from east to west bisecting the map, and if you explore it on the eastern side, you'll come to a diagonal wood bridge over the water, and three large stones that are hard to miss, and which are landmarks for a treasure map that you may already have discovered earlier in Everdale...
The Buried Treasure
If you already let yourself inside a locked but uninhabited building in Everdale (in the Central Farrock Range) earlier, you may have found a treasure map there: The three large stones you'll find in a triangular arrangement here lead directly up to a slightly obscure but very straight path leading into the pine forest, and then turning onto another straight path leading into a clearing full of tree stumps.
One of these stumps on the western end contains the buried treasure. However, it is also secured with a high-level lock and a dangerous trap, so having some combination of lock picking, high-level lock melt spells, and either skullduggery or the trap kill spell will probably be required to overcome these obstacles. 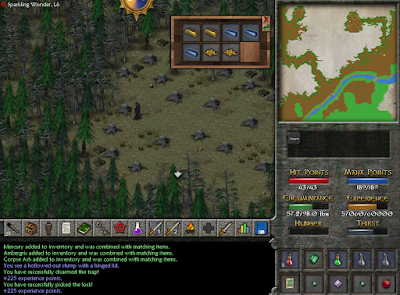 After you overcome the obstacles of the locks and traps, you'll find a hoard of gold and mithril bars, and gold coins. (The gold and mithril bars are so heavy that you may want to plan ahead, and only visit this area when you have Ogre Strength spells or potions, and perhaps even the Portal spell.)

If you head north toward Broken Blade after leaving the hidden clearing and backtracking, you'll also find another macabre camp with some human remains and powder kegs, but not much else. After this, you can  follow the winding road through the upper central/western part of the map to reach the Broken Blade Region.

The Broken Blade Region
Entering this region from Eastern Fellpine will put you on a broad path leading north, but you'll be glad for plenty of room, since Broken Blade is infested with giant beetles called "Goliath Boreheads." These would be easy to outrun and evade if they were just "melee" attackers, but they also emit a high-pitched keening sound that can stun and immobilize you for awhile. If possible, keeping your distance from them or preferably using stealth will minimize the danger, and they are also susceptible to the Sparkling Wonder spell to at least some degree.
Further north, you'll find the ruined town of Broken Blade, with Goliath Boreheads shambling in the ruins, and several abandoned houses containing  some random treasures. (Some of the treasures include valuable heavy armor or weapons, however, which you can sell for a lot of gold.)
You can also find some more citizen writs inside abandoned houses in this area. (You probably already have one, but if not: You'll need one not only to enter Port Kuudad, but also to get through the Raven's Gate tunnel leading to the snowy northern realms of Durnore and Hammerlorne Mountain, which you'll have to visit to get the Crux of Fire.)

"A Meeting with Sparrow"
The quick-travel monolith is in the center of the first part of town, and if you head northeast past this, you'll find a large building near the coast. Sparrow, who the Guild sent you to meet to receive her key to the Hammerlorne Mines, is inside this building.
Unfortunately, you will now discover that despite her earlier work for the Guild, Sparrow will have since become another one of the victims of the unseen entity known as "The One." Sparrow will become hostile to you after you speak with her, but you won't have to kill or fight with her to still solve the main quest to get a key to the Hammerlorne Mines and claim the Crux of Fire.  (You can also find two treasure chests inside this building, before or after running away from Sparrow.) Sparrow probably won't chase you too far away from the building, and if you want to leave the area quickly you can probably go to an obscure area long the coastal fringe in order to quick travel away.
If you follow the roads bending southeast instead, you'll also find a lot of atmospheric things to see, including some hints about the now-ghostly history of Broken Blade. (This is also one of the ways you can reach Lorewitch Tower later on, via the somewhat obscure route that will require you to come down to the northeastern corner of the northwest Kessian Basin map.)

The Fellpine Forest
This map is mainly accessible via the road from the south, which will place you roughly in the central part of the map on a path leading north, where you'll eventually find a huge clearing and a gaping pit, surrounded by more Goliath Boreheads.
Hunter, the ranger in Wolfenwood who also teaches Foraging and archery skills, gives a quest to kill one of the Goliath Boreheads to claim a piece of petrified wood from its innards, but on our zero kill run we skipped this.
There is also a single treasure chest hidden up at the north near the water's edge, and a northeastern path up to reach an old cemetery in the woods, just south of Cape Sorrow...
Cape Sorrow
If you exit the Fellpine Forest via the north path past the cemetery, you'll arrive at Cape Sorrow. The Cape is a relatively small landmass jutting a short way out into the sea, and you'll find evidence that necromancers (who are no longer present) have taken advantage of the abandoned cemetery in northern Fellpine to practice their craft and build a shrine here.
If you inspect the shrine, you'll have the opportunity to remove a cache of large gemstones: two diamonds, a ruby, and an emerald. However, before becoming too hasty to grab the gems: The shrine is trapped, and if you touch it, it will trigger paralysis for a number of turns, during which time a host of "Cursed Undead" will appear and lurch forward to attack you.
For a pacifist run Elemental mage who may have the invisibility spell, however, all you will probably have to do is cast the spell at a high enough casting level that it lasts for at least a few more turns than the paralysis, enabling you to remain invisible to the Cursed Undead until your normal movement is restored. (This would probably also work just as well for a non-mage with an invisibility potion of sufficient strength to outlast the paralysis.)
To escape the undead more easily you could also cast "Turn Undead" if you have Divination. (If not, you can simply run away with the gemstones, which would probably be easy enough as long as you have a method to outlast the temporary paralysis at the shrine without becoming surrounded.)
Last but not least: There's another chest a short distance east of the shrine that you may want to grab first, in order to make a more smooth escape from the Cursed Undead who appear after you grab the gems.