This section covers both the Durnore Region (which you'll need to visit to compete the main quests if you're doing a zero kills pacifist run), and also the frozen tundra and expanses over the frozen Hellice Lake, which covers four maps:

From Raven's Gate to Durnore
If you reached the western Raven's Gate and met Osgood, you'll have the option to have paid 50 gold pieces to be transported directly to Durnore, in which case you'll already have arrived near  the entrance at the foot of the Hammerlore Mountains.
But if you chose to explore these expanses on foot, you'll be able to travel through up to four maps making up the large frozen surface Hellice Lake: At any one of these points, you will eventually encounter freezing blizzards that will do some freezing damage, unless you have high elemental resistance, but even a low level healing spell should be able to repair the damage reasonably easily.
On the map directly north of the Raven's Gate, you'll find a desolate expanse of snow with a small grove of snowy evergreens roughly in the central part of the map, slightly to the west, but there is not much here other than some skeletal remains and a sack with minor treasures.
If you headed west from the west Raven's Gate exit instead, you'd find another mostly desolate expanse on the map beyond, but with a den of snowy wolves at the far southwestern corner. You can return here for another nonviolent quest that you can receive in Durnore, so it might be best to wait until then.

House of the Invisible Alchemist:
The northeastern map contains a memorable discovery in the central/northern area a short way past the snowy forest in the east: After crossing Hellice Lake, you'll find a well-kept house in the snow, and if you enter it, you'll receive the message: "This cottage sits on the northern side of Hellice Lake and is a welcome reprieve from the blistering cold. Upon stepping in you see that the cabin is empty- yet you have the strangest feeling that someone is watching you."
You won't see anyone there, but if you examine the desk inside the house, you'll find some journal pages written by the unseen resident, exulting in their discovery of an effective formula to brew potions of invisibility by combining ectoplasm with noximander venom. As far as we know there is no way to converse with the unseen "watcher" whose presence your player character senses here, but they won't make any move to stop you from learning their formula (if you don't know it already) and writing it in your own alchemical journal, and then exiting the house peacefully to continue your journey.

The Durnore Region
If you arrived on foot by crossing the snowy expanses, then you'll probably have arrived here by heading west of the northwestern Hellice Lake map, and will find snowy evergreen forests along the craggy mountainsides of the Hammerlorne Mountains. 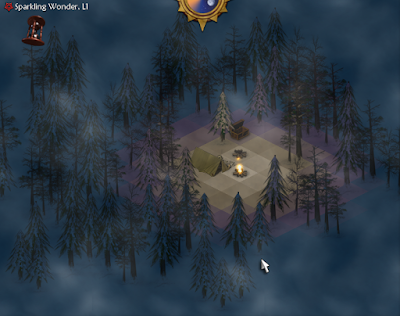 There is a grove of trees in the lower central map with an abandoned camp and treasure chest, and you will find the dwarven mountain town of Durnore in the northwest, walled in against the mountainsides.
Dwarven Mountain Town of Durnore
There is an obelisk you can examine to add Durnore to your quick-travel destinations near the entrance at the gates. (You'll already have arrived near here if you paid Osgood 50 gold to transport you here.) The first building inside the walls is Duuna's Northwind Alehouse, which you can visit to buy some useful mercantile items or rent a room.
If you walk up the street northwest, you'll find an alchemical shop run by Horshum, a dwarven alchemist who can sell you many potions and reagents.
At the north end of town right of Horshum's is Gilgamen's Ironworks, run by a dwarf blacksmith who can also train you in the repair skill. (You can also learn at least a few points in the repair skill by putting on reasonably inexpensive items like Tinkerer's Gloves, which is probably enough to have your gear repaired after resting, particularly if you do a lot of camping to forage.)
Lord Brumbleton's Throne Room
You'll meet the Dwarven Lord in a guarded throne room in a small keep built against the cliff-faces here. Brumbleton is very civil to you considering that most dwarves don't trust outsiders, and will even offer you a side quest called "The Quest of the Snow Pup."
The Quest of the Snow Pup
Brumbleton will tell you about the den of the snow wolf queen Shebara, which is in the far southwestern corner of Hellice Lake. The snow wolves are a symbol of the land of Durnore, but they are also wild and dangerous, and Brumbleton hopes that by domesticating a single snow wolf pup, he and the dwarves can stop the wild snow wolves from being as hostile to them in wilderness encounters. He'll consequently offer you a reward if you can handle the delicate task of stealing into Shebara's den without harming her, and removing a single snow pup for them to raise in Durnore.
You can find the den by traveling to the southwestern Hellice Lake map: Most of the Red Wolves you'll encounter in the open snowy plains (and even more of near the den) are at least slightly susceptible to a high-level casting of Sparkling Wonder, and you can also keep them from penning you in by leading them away from the den and then using the Haste spell (or Haste potions), if you don't have enough stealth of invisibility to slip in unseen.
Shebara is larger and more dangerous than the other wolves, and may be difficult to lead away from the den, so it's easiest to have either strong stealth skill or the invisibility spell or potions. (All you need to do to grab a pup is to access the den and pick one up into your inventory.)
If you bring Brumbleton one snow pup to domesticate without harming Shebara, he'll reward you with 750 gold and 2000 experience points, remarking that one pup will hardly be missed, but that if you'd taken more than one, it would probably have brought the pack down on Durnore. 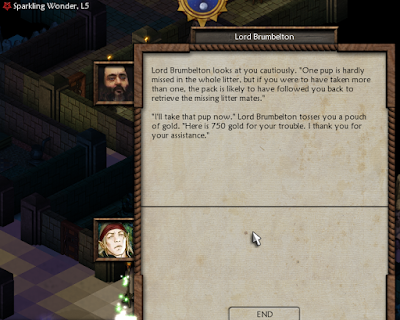 Note: This quest requires doing exactly as Brumbleton asked, which won't be a problem for pacifist challengers, but would cause failure if you harmed Shebara. (We never tested using violence or taking more than one snow pup from Shebara's den, but apparently if you took more than one, snow wolves would also show up and attack Durnore after you returned, just as Brumbleton warned.)

Obtaining the Key to the Hammerlorne Mines (Crux of Fire):
The locked chamber behind Brumbledon's throne room is the only place we know of where you can get a key to the Hammerlorne Grand Hall & Mines, assuming you're playing Eschalon Book II without killing any one. (The only other way to obtain such a key would have been to slay Sparrow, but you won't have to fight with her at all if you use this method instead.)
The bad news is that you won't be able to be completely straightforward with Brumbleton and the Hammerlorne Dwarves: The Guild of Crius Vindica has given you the mandatory quest to seek out and recover the Crux of Fire, and this is considered a closely guarded sacred relic inside the Hammerlorne Mines.
Fortunately you'll never have to kill or injure a single dwarf (either here or inside the mines), and by using some stealth, alchemy, or magick to briefly become invisible and pick the locked door here in Brumbledon's throne room, you'll be able to sneak into his private bedchambers and steal a key to the Hammerlorne Grand Hall & Mines from Brumbledon's trapped chest. (Doing so will solve the quest "The Crux of Fire: A meeting with Sparrow" and reward you with 1000 xp, and you can leave Sparrow alive and unharmed back in Broken Blade.)
To sneak into Brumbleton's chamber and take they key: You'll either need some decent lock picking skill, or a fairly high-level casting of Lock Melt, and will probably need to first become invisible with either magic or potions, since the locked door is right in full view of the guards in the throne room.
(If you're fully invisible via a spell or potion while you're meddling with the lock, you may receive a notice that Brumbleton and his guards "hear a crime being committed," but they won't know it's you unless they see you in the act.) Closing the door behind you after after you sneak in to the rear chamber should prevent the dwarves from coming in and catching you at the chest, even if you need to make some noise to deal with the trapped chest.
Inside Brumbledon's bedroom, you'll find a chest with a trap in it, which you can disarm or trigger by throwing projectiles at the chest before approaching it yourself. (If you're a mage, a low-level casting of Fire Dart should work for this if you're persistent.) When it's safe to open the chest, you'll find the Hammerlorne Key inside, along with a bar of gold, warhammer, and scale boots. (We only took the key, and then re-cast invisibility to exit the chamber so that Brumbleton and his guards never saw us come out.) Grabbing the key will solve "The Crux of Fire: A meeting with Sparrow" and reward you with 1000 experience points, advancing your quest book to "The Crux of Fire: On to Hammerlorne."
Now all you'll need to do is to travel west along the mountainsides to find the Hammerlorne Grand Hall, which is built into the mountains over the mines. You won't be able to get into the front entrance (shown above), but the Hammerlorne Key from Brumbleton's throne room will release the lock to the rear entrance further to the west.
Just be warned: Before you go in, you'll want to be well prepared to survive a formidable dungeon three levels deep in order to finish the quest to claim the Crux of Fire...