Lorewitch Tower, home to a school of mages, and rival guild to Erubor's Shadowmirk, is found in an isolated island-like area in the Northwestern Kessian Basin. You won't be obligated to visit the Lorewitch Tower to win the main campaign, but doing so will allow you to completed Erubor's quest "Assistance from Lorewitch" for 2500 experience points, and also get one more of the mysterious bells you would need to eventually be rewarded with 30,000 xp when you bring all four of them to the underground archives in Lockston Hall.
If you already played a pacifist challenge run through Eschalon Book I, you may also be pleased to find out that you won't have to kill anything in Lorewitch (unlike the similar mage tower of Shadowmirk in Book I, where an egregore and raptor had to be dispatched to open doors).
The Journey to Lorewitch Tower
Reaching Lorewitch Tower is a bit tricky: Strictly speaking, it is located in the Northwestern Kessian Basin, but you won't be able to reach it from the main landmass on that map, since the Tower is isolated on an island across a body of water. Instead, you'll have to either reach it from one of the maps north or west of the Kessian Basin:
Quick traveling to Broken Blade and then taking the road southeast will cause you to emerge from the forest on the western side of the Mistfell Northern Coast. (There was at one point a bridge connecting the two landmasses on the Misftell Coast, but it has been destroyed since before your campaign begins.) An alternate way would be to go to Eastern Fellpine and then approach the far northeastern edge of that map (making sure you're above the river): This would probably require more legwork but still get you to the upper corner of the Northwest Kessian Basin, where you'll find the entrance to the tower.
Whichever way you go, you'll likely encounter some fast-moving wolves that can be turned with a few casting of sparkling wonder to keep them from getting attacked by the Sentinel Stalks outside the Lorewitch entrance. Dense Nimbus is a good way to get past the stalks if you don't have invisibility, after which you'll only have to circle around to the southeast side of the tower and open the gate yourself to get inside...

Lorewitch Tower, Ground Floor
When you enter the interior of the tower, you'll find yourself in a dim echoing chamber that appears to be empty of inhabitants at first, and won't have to face any adversaries for a period of time while you work on solving a puzzle involving levers that open multiple combinations of gates inside this floor. The levers in each chamber control multiple portcullis gates at once each time they're thrown, making this a bit more challenging than some puzzles. 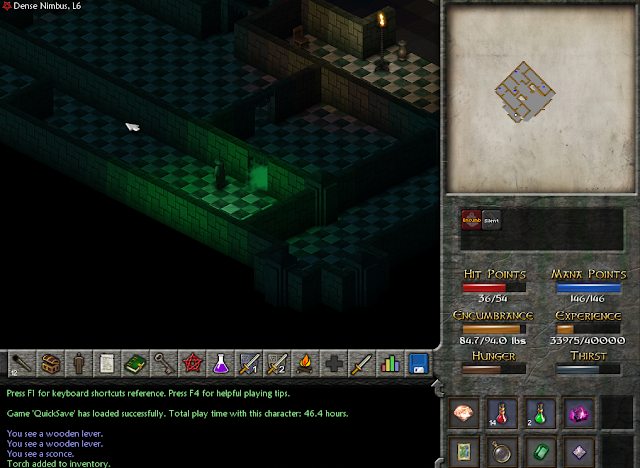 Using the entrance to the tower as a rough orientation point (and ignoring every minor twist and turn maneuvering around interior wall partitions): The solution that worked for us was to throw the first lever in the side chamber north/northeast of the main entrance, then the one more or less directly across from (northwest) from the main entrance, then to go back again and throw the first one in the east (i.e. north/northeast of the entrance) again, and then to go throw the one all the way in the upper west corner of the chambers as the second-to-last step. Finally, going a little ways southeast of that to throw the one further inside the interior chambers opened enough gates (including the exit gate in the southwest). (Referring to the small map created by the cartography skill in the screenshot might make it slightly easier, since the levers referred to are marked there.)

Mortikus
When you've opened the gates to the outer wall in the lower west perimeter, you'll hear a strange sinister laugh as the gate slams shut behind you. You will now face a floating egregore-like being named Mortikus, who fires dangerous projectiles that can also poison you.
However, don't let the gate that slammed shut behind you worry you, because you can just walk straight past Mortikus without fighting, and exit the tower via a third floor teleport without having to deal with him again: All you'll need to do is head past and pick the lock (or cast the Lock Melt spell) on the door around the perimeter of this floor in the southeast, which will let you up to the second floor.
Lorewitch Tower, Second Floor
On the second floor, you'll find a large darkened maze with a sinister red glow in the center. You'll find another Dimensional Eye named Vaxia near that central glow, but may still need to pass through it while winding through the passages to both the far northern and southern corners to throw two levers, which will open up the way to the stairwell leading to the much more congenial third floor.
Before you leave, however, you will probably want to wind you way over to a chest you can find near the far western corner of the chamber, to claim the "Virescent Bell" (one of the four you'll need to claim the 30,000 xp beneath Lockston Hall later). There are also some other treasures in other chambers in the maze.
One other note: We use an invisibility potion to get past Vaxia at one point, but she still seemed able to see us even after quaffing the potion. (Invisibility still seemed to help to some degree by lowering the ability of Vaxia's glowing blue projectiles to actually find their mark, but she also came close to slaying our mage a few times, so use caution.)

Lorewitch Tower, Third Floor
The third floor of Lorewitch is a comparatively peaceful one, as long as you don't try to steal from the mages: There are no adversaries here, only preoccupied acolytes, and the archmage Charma, who Erubor sent you to meet for the "Assistance from Lorewitch" quest. You can find Charma in the central chamber, which is accessible from the far side of the third floor. Charma will be civil to you and remark on having watched your progress since you entered the Tower, but also remark that since they are competitors with the Shadowmirk Guild, they aren't on the friendliest of terms with Erubor. However, when you give her the Silver Chalice, she'll be impressed by the gesture, and decide to give you a very powerful weapon called a plasma wand. (The wand itself won't be needed on a zero kill run and isn't worth any gold, but if you intend to brave the optional dungeon of Fathamurk found beneath the Farrock Caves, you'll find it highly useful in defeating the dangerous golem inside.)
Completing this conversation with Charma will also complete the quest from Erubor and reward you with 2500 experience points, after which you'll be able to exit Lorewitch through the one-way teleportation pentacle  just southwest of Charma's central chamber, without having to backtrack through the lower floors of the tower.