Whether you arrived in Nashkel via the northern Coast Way, or were automatically taken to Nashkel's Helm Temple to be rewarded for breaking Commander Brage's curse (see previous section on the Sword Coast), there's quite a few things you can do here: 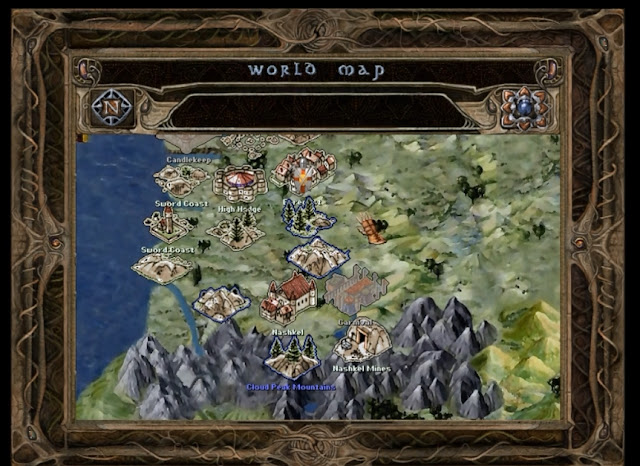 Nashkel is seeing dark times due to the iron crisis, the threat of impending war between Amn and Baldur's Gate, and the reputed presence of "demons" who have been taking the lives of hardworking miners inside the Nashkel Mines, which you'll find southeast of this map. If you arrived in Nashkel via the northern roads, you'll meet a soldier who will tell you about the formerly well-respected Commander Brage who went berserk and disappeared into the wilderness, causing morale to diminish even further. (Our solution to the Brage case was described in the previous post on the Sword Coast.)
There is also an inn at the north of the town, but if you walk inside it, you'll be approached by another evil bounty hunter named Neira, who wants to kill you for the recently raised bounty on the head of Gorion's ward (your player character).
There is also a store next door to the inn down the main street where you can buy or sell. (The "quest" there isn't pacifist challenge-friendly since he just offers more gold than normal for the pelts of slain Winter Wolves.)

Berrun Ghastkill
Whether you arrived via the road or by being transported to the Helm Temple via Brage's quest, you'll meet Berrun Ghastkill standing near the path through the graveyard toward the Temple. 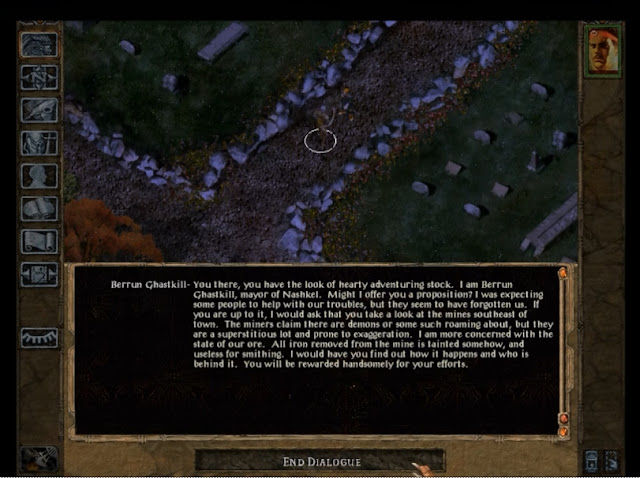 He will tell you about the many dark shadows over the town, and offer you a reward if you can figure out the source of the trouble coming from somewhere inside the depths of the Nashkel Mines. (This is the main storyline quest you'll need to complete eventually, covered in detail upcoming sections.)

Oublek the Bounty Administrator:
Just down the road from Berrun Ghastkill and the cemetery, you'll find a large man named Oublek who will initially mistake you for a Bounty Hunter named Greywolf. If you're honest and say he's mistaken you for someone else, you'll receive an increase in your reputation. (If you lied, the implication is that you might be able to take some gold owed to Greywolf, but we didn't test it.)
After you speak with him again, he'll tell you about which bounties are currently available: 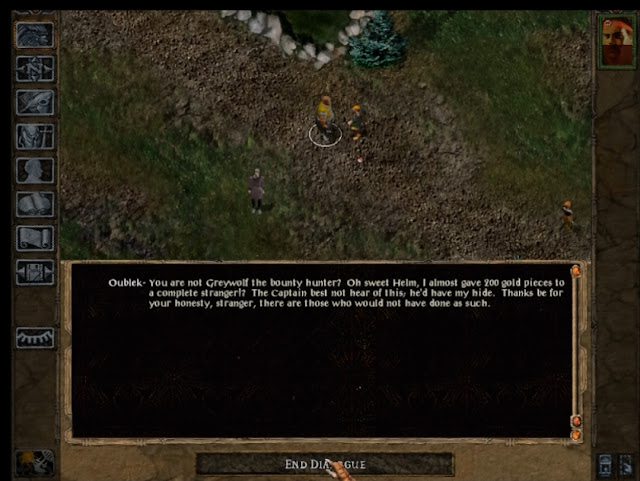 Oublek would normally have a bounty on the head of Commander Brage, but if you helped Brage turn himself in to the Temple of Helm by solving his riddle (see Sword Coast section) you won't be able to claim any extra reward from Oublek. (We never tested the option that would require killing, but the xp for helping Brage turn himself into the Helm Temple to break the curse reportedly gives you twice the reward of xp you would have gotten if you'd killed him, and possibly also twice the gold— so the nonviolent path actually seems to offer greater rewards in this case.)

The Bounty on Prism's Emeralds
The second bounty is on several emeralds which a sculptor named Prism apparently stole before becoming a fugitive.
You'll find Prism by traveling to one map east of  Nashkel and heading to the southwestern part of the same map that contains the entrance to the Nashkel Mines (the rest of which are covered in their own section). You'll find Prism near a rock outcrop there, and see that he's carved the visage of an Elven Queen into the stone. Unfortunately, it turns out that Prism got carried away by his passions when completing his masterpiece and stole two emeralds to use for the eyes.
The pacifist run problem here seems to be that there is no nonviolent way (as far as we know) to solve this by speaking with Prism: If you talk to him and learn his story, the bounty hunter Greywolf will show up with the intention to kill Prism for the bounty on the emeralds. You'd consequently be forced to directly or indirectly dispatch Greywolf if you wanted to help Prism, after which Prism would die also (his exertions apparently having already taken a toll on his health). 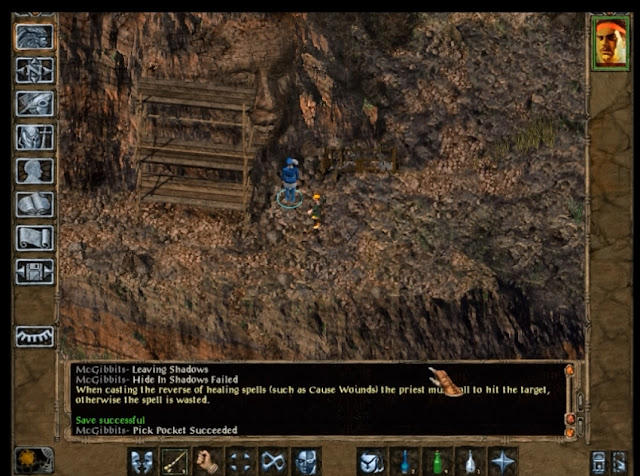 A mischievous but nonviolent alternative (contributed by our halfling thief player) is to simply pickpocket Prism without even talking to him to obtain both emeralds, and then return to Oublek to claim the bounty.
The normal reward appears to be a few hundred gold pieces and 200 xp for turning in both emeralds. However, it's also possible to drop one of the emeralds on the ground before talking to Oublek to claim the same amount of gold and xp for a single emerald, and then pocketing the other emerald to be sold for a substantial price at any shop. 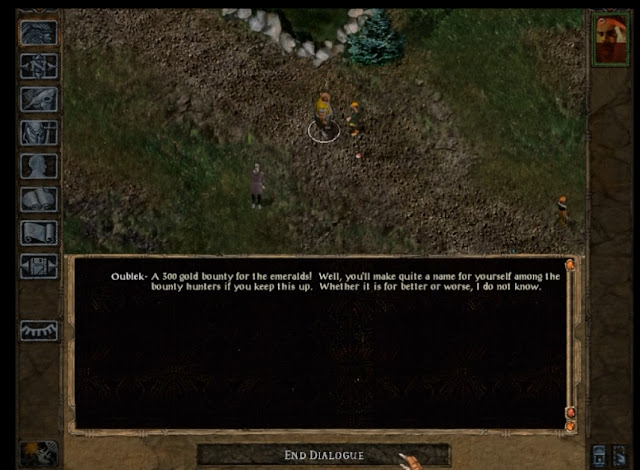 (Of course, if pickpocketing Prism rubs you the wrong way you could also just leave Prism and his emeralds alone: Greywolf won't ever show up unless you talk to Prism near the sculpture first.)

Joseph's House
If you travel to the southeasternmost corner of the map just down from a large pond, you'll find a house where a miner's wife lives (along with her sick elderly mother): She'll tell you her husband Joseph disappeared weeks ago, and that you can identify him by his greenstone ring if you go asking after him. Unfortunately there's no way we know of to bring about a happy ending here, since you'll find Joseph's body inside the Nashkel Mines, but if you bring the Greenstone Ring back to his wife, you'll be rewarded 800 xp for doing your best to help. 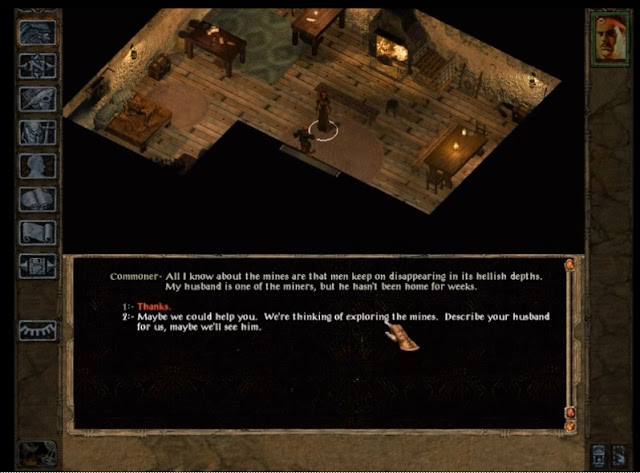 Noober
On a lighter pacifist run note: After you cross the bridge just south of the Belching Dragon Tavern, you'll meet a local man named Noober. Noober will confide that most people find him irritating, and that many even throw rocks at him for this reason. 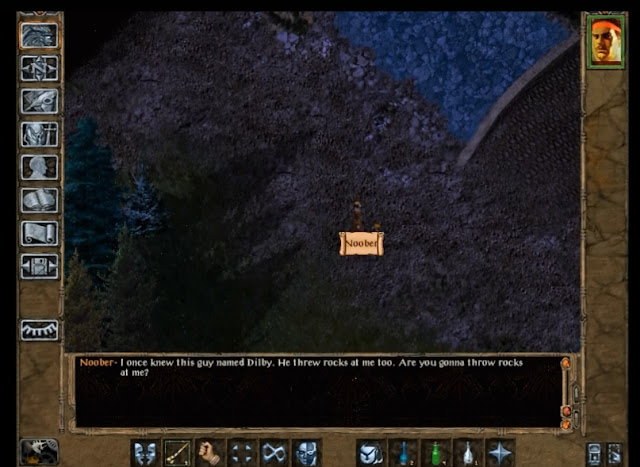 If you persist in talking to Noober repeatedly (disregarding any opprobrious remarks he makes, such as "Those colors look really stoo-pid on you"), you should reach a point where he will ask if you're going to throw rocks at him, after which he will begin to intermittently ask "What about now?" over and over again as you just walk around near him (i.e. without having to click on him to re- start the dialogue yourself). After a minute or two of this exercise, Noober will remark that you're very patient, and that he can't think of anything else to say— after which he'll walk away and you'll receive 400 xp (which is a solid gain for a modest-level pacifist challenger).

The Ankheg Armor
Fortunately you won't encounter Ankhegs in the farmland here, but if you travel all the way to the far western tilled field, you can find a hidden stash (specifically at coordinates X:187, Y:2742) containing a pearl and some very powerful armor crafted out of an Ankheg's shell: 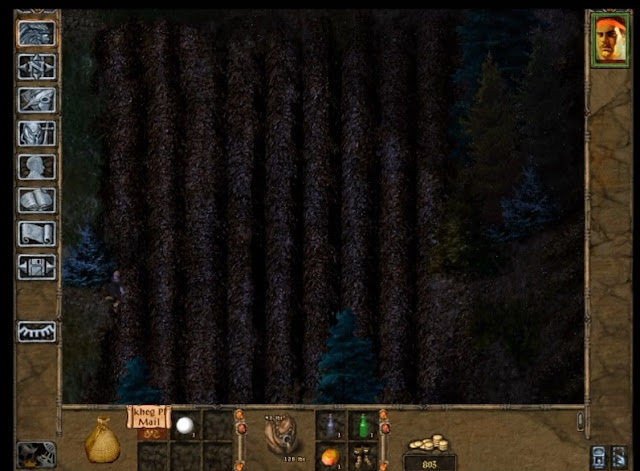 This armor will make any warrior-class character much tougher at withstanding damage if worn, and is also worth a lot of gold. (The only other way you could obtain such armor would be to break the pacifist challenge rules by killing an Ankheg and then paying thousands of gold pieces to Taerom Fuirum at the Thunderhammer Smithy to craft a set for you.)

Other optional areas of interest in Nashkel:
You can visit the Belching Dragon Tavern in the south/central part of the map (on the east side of the river) to meet the famous travelling bard Volothamp Geddarm, who will tell you many stories (including background plot information about the troubles at the Nashkel Mines, and Commander Brage and the cursed sword) if you buy him some ale.
On the dark side: If you click one of the gravestones beneath an obelisk in the cemetary, you will be confronted by a being named Daer'Ragh who will tell you not to disturb him (and apparently if you do it again, he'll summon some formidable adversaries to attack you).
There is also a Conjurer of "lawful evil" alignment named Edwin standing near the bridge on this map. He'll say he wants to hire you to murder a mage Dynaheir for reasons he refuses to explain, but you can safely just ignore him and refuse. (He'll apparently join the band if you agree, but as far as we know he can't ever actually make you harm anyone even then, though having evil aligned NPCs in your band may cause other problems we're not aware of.)

The only other useful things we found that didn't involve violence were a handful of locks to open for xp (as usual, without actually having to steal anything inside).  While the yield of xp per lock is very small at around 10xp, our halfling thief actually encountered the problem of being less than 100 points from a level-up, so in a run where he wasn't allowed to fight any monsters for xp, opening these locks did actually make the critical difference at this point:
On the path that begins just east of the Garrison and winds up between landscaped trees and vegetation, you can find a mansion and "invite yourself in" to meet some nobles who are unhappy to see you, and (reportedly) also a scene in which a woman named Samantha might let her lover out of a closet to attack you under certain circumstances. 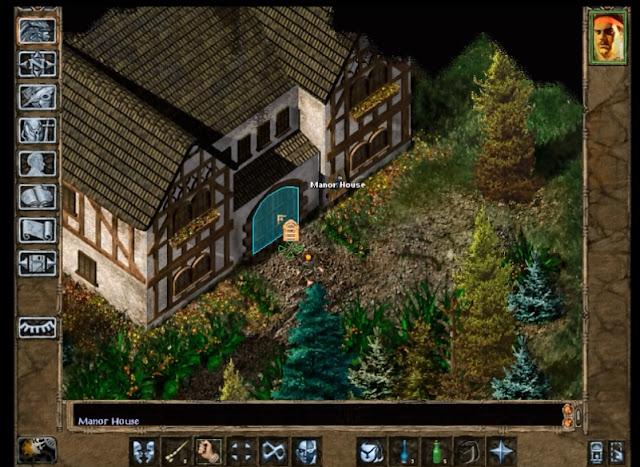 The other place to find some locks is inside the Garrison building behind where Minsc is standing. One of the soldiers will approach and talk tough to try to intimidate you when you go inside, but if you choose the tough-talking confrontational dialogue option (regardless of how small and weak your pacifist run character may actually be), the soldier will promptly change his mind, apologize, and leave you alone. 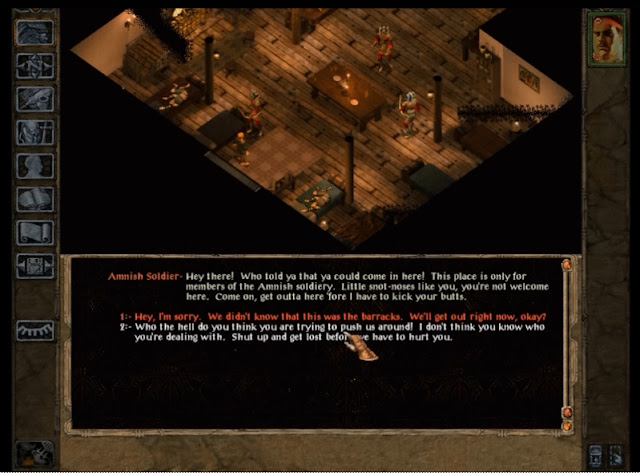 You are then free to pick the various locked chests to acquire 10xp per lock, which won't cause the guards to attack you unless you actually tried to open a chest (which would immediately make them confront you and either attack you or demand to be paid off with bribes.)