There are some scenic places to visit along the coast, but the noteworthy place to complete a large number of pacifist run quests with no violence is Clovelly Village, a seaside village on the central coast a long way east of Four Stones Village... 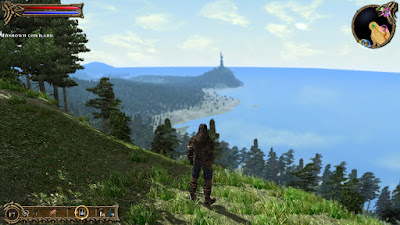 Riding down the costal ridgelines (with enough haste to leave roadside bandits fumbling their drawing steel and notching bows to no avail), we eventually descend in clear weather to find the picturesque fishing village of Clovelly, standing between a sandy forest of shorepines and the sea's edge.
"A Problem With the Scapulari"
You'll get this quest form the mayor of the village, Verno, who informs you that the village is being menaced by anthropomorphic squid-like humanoids known as the Scapulari, believed to act at the bidding of a local sea deity. Verno will ask you to visit a knowledgeable mage named Hesmar Bratya nearby, who lives in a manse out in the woods a ways away from the village. There are some scapulari camps en route if you go by the coastal strand, but they're all easily avoided.
The Mage Hesmar Bratya will be glad to help you when you approach him, and suggest that the problem may be due to the unexplained wrath of the sea deity Yatholen. 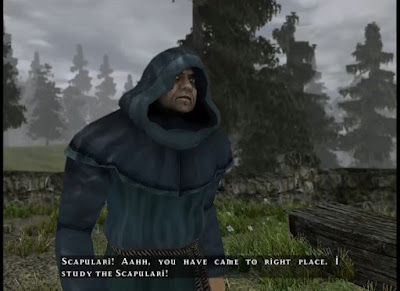 The mage will send you to Clovelly village to investigate. In the end, you can solve this mystery by talking to a woman named Amberleen and her brother-in-law Broven.
A clue to Yatholen's anger is found when you learn that Amberleen's husband died at sea and Amberleen cursed the deity for stealing his life. After the mage insists that you look deeper into the matter, questioning Broven will reveal that the brothers actually quarreled in the boat and that the husband Darven was actually killed by a blow to the head by accident.
After talking to the mage again, and then to Amberleen, things take an even more dramatic turn when she tells Broven she forgives him, and you learn shortly after that she has drowned herself in the sea to appease Yatholen. Talking to the mage again, you'll learn that the deity's wrath has evidently been appeased, and you'll be rewarded with more experience and gold for completing the quests. 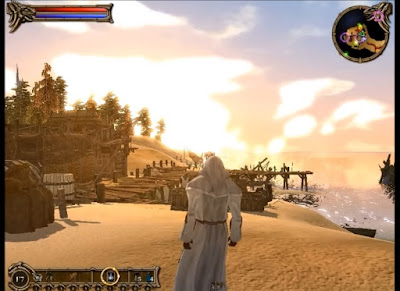 The Estranged Lovers
There's still more seaside melodrama to be found at Clovelly Village, but this time with a happy ending available: A short way inside the stockade walls of the village (possibly the first time you enter the village by the main gates), you'll  encounter Aias Moratos, an angry father who thinks his daughter's suitor is a weak milksop, and offers you some gold to go give him a good thrashing. 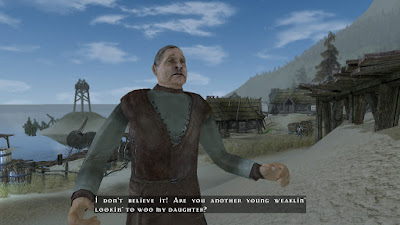 You don't have to do that if you accept this quest, however: Just go visit the young man Theron Hloos, and you'll be able to help him unite with his beloved Maya instead, after completing some quests that will also reward you with violence-free experience points multiple times:

First you'll need to talk to Maya's mother Jemma at their house, then be sent back to Theron to learn that he had purchased a ring, but it was stolen. Next, speak with Theron's dishonest neighbor Tomal Aikos, and demand that he give up the location of the thief. After Aikos rats on the thief, you'll find the knave at a camp a short way into the shorepine wodds from the village. 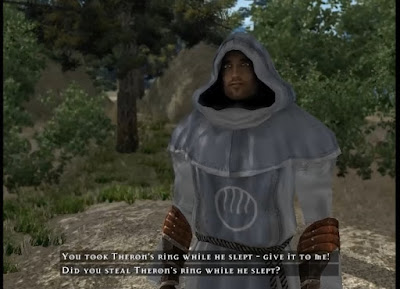 Demanding that he give you back the ring at once will be successful, but it turns out he handed over the ring as an attempted fake-out so that his two cohorts could jump out of the bushes with weapons to attack you... 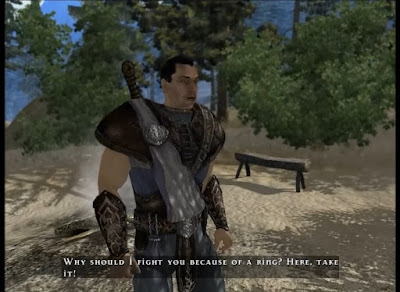 The good news: It's easy to just run away from them at this point and leave them in the dust, and return the ring to Theron Hloos.
Theron Hloos will then ask you to bring the ring to Jemma, Maya's mother.  Finally, you'll need to help the two lovers elope and get married. Fortunately there is a mage named Solab Murbar in the village who is also a romantic spirit, and is willing to help them by performing a marriage ceremony. (You won't actually see the ceremony take place: You'll instead just need to talk to Solan Murbar a final time, and he'll help the two lovers escape and get married off-scene, ending the quests and rewarding you with more experience points.) 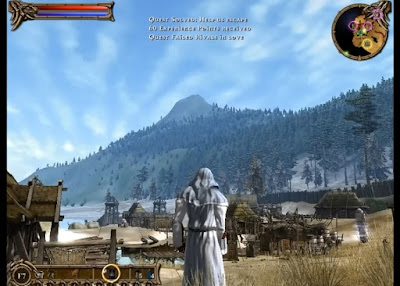 At this point, you'll receive a "Quest Solved: Help Us Escape" notice was for successfully aiding the pure-hearted young lovers. The "Quest Failed: Rivals in Love" notice refers to the alternate and mutually exclusive quest given by the girl's angry father— which would have entailed laying a beating on the romantic young man, and then returning to the father to be rewarded with some gold (which we did not test). Fortunately, there are no penalties in Two Worlds for failing subquests that would have required beating up and/or killing anyone, so you can usually accept such quests just to find out if a nonviolent solution actually exists (which it often does).

"A Fisherman's Problem" & "A Meeting With A Pirate"
The next good quest originating in Clovelly will be given to you by a fisherman named Etar, who is angered by the presence of a man named Virgul who has anchored his schooner in nearby Stico Bay. 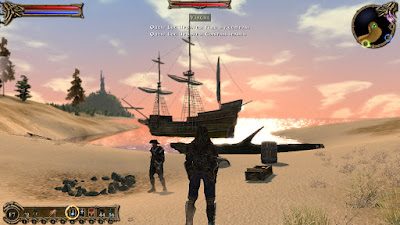 Etar says Virgul claims to be a trader but is actually a pirate, and he's a thorn in the side of the fishermen as long as he's skulking in the area. 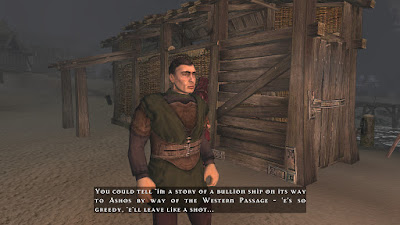 Fortunately you won't have to clash with Virgul to get him to leave though: It turns out he's lingering in the bay because some of his men have stolen his compass, which he needs to navigate on the open seas. You can find the compass near the mouth of Stico Cave, which is up the sharply rising ground a little ways inland through the woods...


You'll find a strange man named Greston outside the cave, who will call you a vagabond. Greston has the compass... 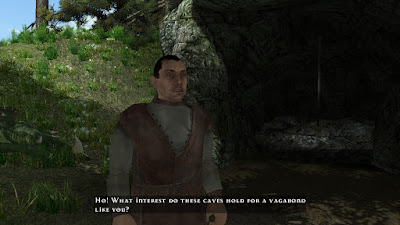 However, you won't have to thrash him to get it: Instead, being patient with him will yield an apology in short order, and he'll say he has been living in the cave for too long and has forgotten how to converse with people. Greston will go on to confide that he impulsively stole his mother's savings when he was young because he wanted to go to the fair, then fled in the belief she wouldn't forgive him. However, now he wants you to go find his mother Faoda in Clovelly, and tell her he is sorry, and he offers you the compass if you'll do this for him. 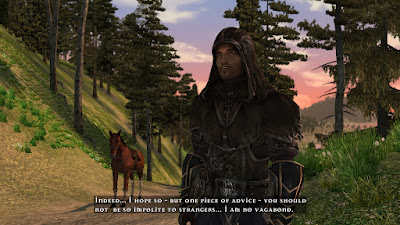 When you talk to Faoda, she'll be grateful and say she already forgave Greston, after which you'll be rewarded with some experience.
After Greston gives you the compass, you can give Virgul back his compass and receive a reward of more gold and experience from him. 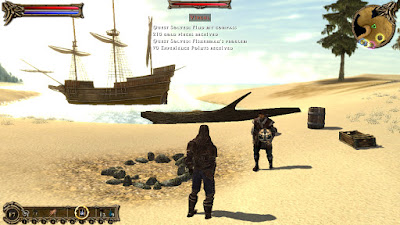 Virgul and his men will set sail after this, and you can conclude the string of good deeds by returning to tell Etar that the pirates are gone, for which he'll reward you with more gold. 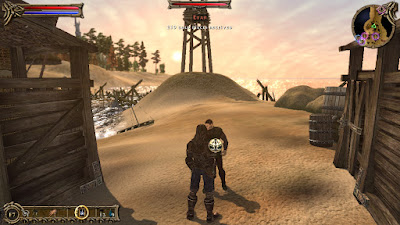 The Healers
Finally: If you've already visited Four Stones village and acquired a quest to speak with several healers named Grah Magna and Famah Tolem, you'll be able to find them here in the main village. (If not, you can use the teleport right outside both villages to return here easily when the time comes.) Ironically, though, this is the only point where your actions at Clovelly village might inadvertently lead to some violence committed by other characters, since the subquest to summon the healers back to Four Stones village isn't what it seems... (See FOUR STONES VILLAGE for details.) 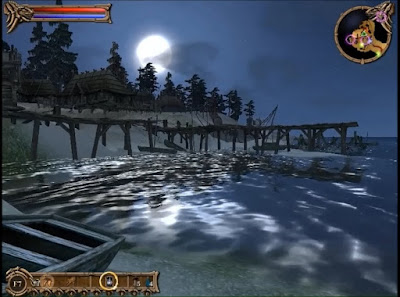