After you've finished all the sub-quests you want to complete for the Skelden and Karga clan (see separate sections for details), you'll eventually need to choose which of the two factions to support in order to be able to claim the Relic Frame needed for the main questline. This is in the Karga Treasury, which you can open in one of two ways:

1)  Side with the Karga Clan:
This was our choice since it involves zero violence, and no negative consquences other than disappointing Cahal Karga, who will be upset with you for declining to slay Erbat Skelden.
His father Ultar will be very pleased with you, however, and reward you with much gratitude, opening the Karga Tresurey for you to take the Relic Frame.

2) Side with House Skelden:
We didn't test this since doing so would cause the Skeldens to launch an attack on the Karga Clan fortress, presumably killing  everyone they could in the effort to wipe out Clan Karga. (Fortunately, the Karga options does not trigger any similar raids on the Skelden Excavations.)

Meeting with Erbat Skelden
If you completed enough of Sanno Moon's quests for the House, you'll have gained enough reputation for Moon to vouch for you and let you into the guarded inner keep 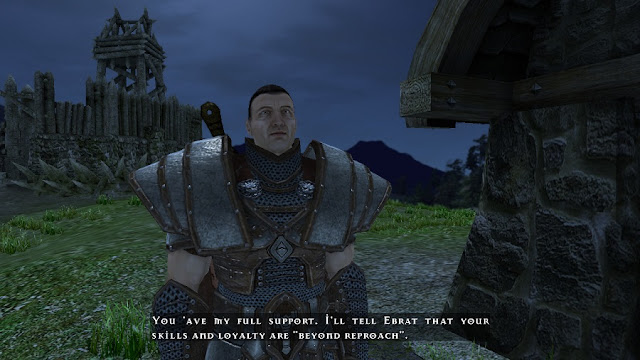 (If not, you'll just need to talk to Moon and his various men at the Excavations to get the quests, most of which don't require any violence.)

As for the details on completing option 1:

Getting the Counterfeiting Proof for Ultar Karga
You will find the counterfeiting proof inside Moon's house at the Excavations, as Ultar Karga suspected. You can choose whether to acquire it before or after your final meetings with Erbat Skelden, described below.
If you do it beforehand, you'll probably have to use stealth and sneak into Moon's dwelling at night after picking the lock. (If you're caught picking the lock, you may only have to bribe the Excavations soldiers with some gold to be let go: Most guards will usually accept 30% of the amount they demand as a bribe at worst, sometimes less.)
Either way, you'll find the moulds for minting gold coins with Erbat Skelden's visage stamped on them lying at the rear of Moon's house, under a band of light to make it easily visible.

Meeting with Erbat Skelden
If you completed enough of Sanno Moon's quests for the House, you'll have gained enough reputation for Moon to vouch for you and let you into the guarded inner keep. (If not, you'll just need to talk to Moon and his various men at the Excavations to get the quests, most of which don't require any violence.)

Erbat Skelden dwells in the large lodge inside the stockade, amidst a lot of torchlit hunting trophies.
Skelden won't hide the fact that Clan Karga has come into some comprising information that could destroy his House's reputation. Unfortunately for Skelden, he only offers a bunch of quests to go coerce and/or kill various people, making him a problematic character for a pacifist run player to help:
The first mission he offers personally is called "Test of Loyalty," which would be followed by two more not-very-nice quests: One is to disable the guard outside the Karga camp, and another would require you to go and blackmail a Karga loyalist named Eryn Calvo in Covengor. Skelden House is holding Calvo's wife Maxia prisoner, so Skelden wants to force Calvo to betray the Karga Clan by threatening his wife's safety. (We didn't try that, but according to other game guides: If you do it, Calvo would reluctantly agree to disable the Karga guard himself, so that no warning reaches the defenders when the Skeldens march on the Karga Fortress.)

Interestingly, Skelden will allow you to talk with the prisoner Maxia Calvo, who is being held inside the "storehouse" jail across from Skelden's own lair inside the keep. Maxia will assume you're a Skelden ruffian at first, but if you're polite to her after she denounces you for a bit, you'll end up with the option to take the key off the floor of the jail and give it to her to let her escape.
Note: We're not actually sure if you need to let Maxia Calvo out to secure her safety, or whether bringing Ultar the counterfeiting proof to oblige Skelden House to flee the North would accomplish the same thing, but the safest bet is obviously to let her out.
Before carrying through with this, however, be warned that Erbat Skelden and his bodyguards will confront you outside the keep's gates immediately afterward, even though Maxia escapes safely. (We tried to see if there was a way to sneak over or under the keep walls to avoid being yelled at by Skelden near the gates, but didn't find another way out.)
Skelden is, not surprisingly, very upset with you, and will confront you at the gates of his keep before you're able to leave. After some spirited exchanges of dialogue (in which your protagonist speaks for you without giving you further options at this time), Skelden will yell some remarks and bellicose warrior threats, asserting that he has traine dwith the greatest swordsmen of the realm, then attack you along with his guards to try to kill you. 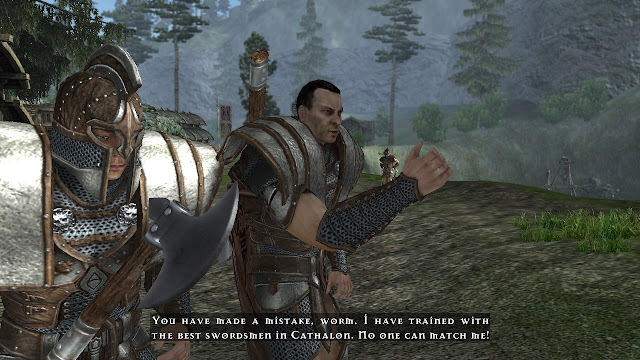 If you're a warrior playing on the "Hard" difficulty setting we suspect this would be a tough fight, but the good news for the pacifist challenger: You can now choose whether to either run away from Skelden with  ease and escape without doing anything confrontational at all, or optionally to freeze Skelden and his sword-swingers in place for about 45 seconds per casting level with a nonlethal Freezing Wave or Earth Chains spell, which will immobilize them and allow you to walk out of the Excavations at as leisurely a pace as you like.
Note: Despite cordial relations with Sanno Moon, at this point he will see Skelden attack you at the gates and  run over to do his duty to the House by helping out his cohorts— but Moon is just as susceptible to the freezing wave spell as the rest of the Skelden sword-swingers who attack you at this point.

Completing the "Final Strike" quest:
The prelude details for Ultar Karga's "A Final Strike" quest were discussed in the separate section on the Karga clan, but ultimately only require you to go and claim proof of the Skeldens' illegal gold coin-minting operations.
Note: If you decided to wait until after the confrontation with Skelden to go get the coin-striking mould from Moon's house, make sure to temporarily freeze the attacking Skelden/Moon gang first, or at least give them a runaround away from the fort first, so they don't trap you inside the house when you go in to get the proof for Ultar Karga. 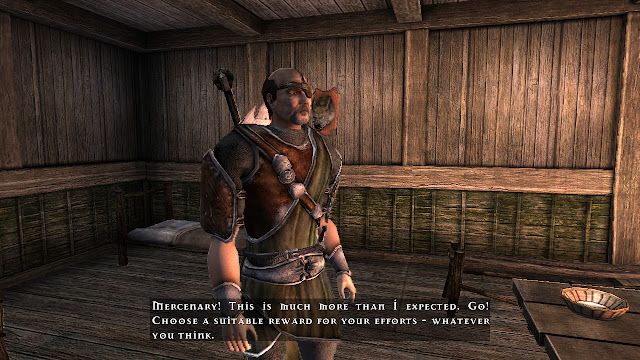 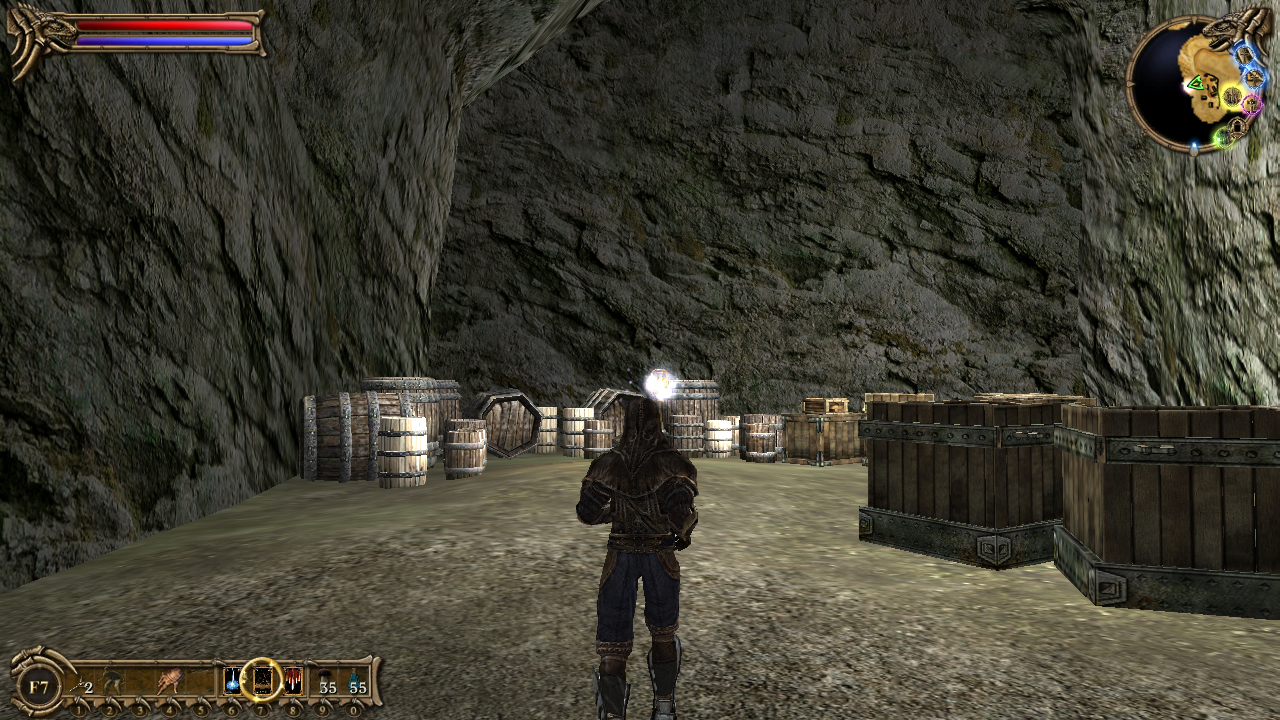 With the former Karga Clan back in power in their northern Thalmont, and the relic frame in your possession, you can venture south to find the elemental relic stones to complete the next part of the main story-line quests.