This section covers Picaroon Isle (which you can initially only reach by ship from Northern Harpoon Bay on the main continent), the Brimstone Lava Fields (just inland east of Picaroon Isle), and the Amireth Grazelands (the homeland of the Taurax, whose stronghold Talushorn will be your final destination to complete Eschalon Book II). When you arrive on the shores of Picaroon Isle, your questbook will update to "Destroy the Crux, Part 2: Talushorn" after you receive your reward of 5,000xp for the previous part. You'll then be able to examine a grave marker serving as a quick-travel marker, and venture southeast into Picaroon Isle. 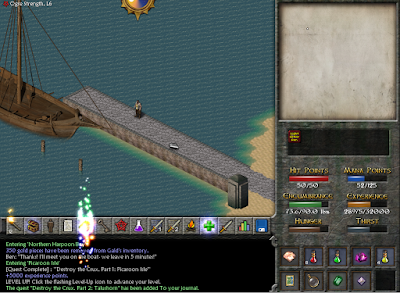 Picaroon Isle and its Merchants
A young woman named Madaline (who claims to be a pirate) sells basic mercantile items and also will take back by ship to Harpoon Bay for 400 gp, though you'll never have to pay for transport if you're an Elemental mage with the Portal spell.
In the upper grove, you'll find Rubie, a dwarf woman who will sell magical items and spells. In the lower grove, you'll meet Mohal, an armorer who usually has quite a bit of gold on hand. (Mohal also gives a sidequest "Arachnophobia," but you can't complete it without dispatching spiders, so we skipped it.)
When you're done exploring the islands, you can move onward by heading southeast over a series of wooden plank walkways leading to some more small sandy islands, and then east toward the Brimstone Lava Fields.

The Brimstone Lava Fields
Here you'll reach a sandy expanse that has recently been subjected to lava flows from a volcano, and have to be careful not to tread on the lava and incur fire damage. You can find several large gem stones and several hundred gold along the black rock faces if you head to the northwest. 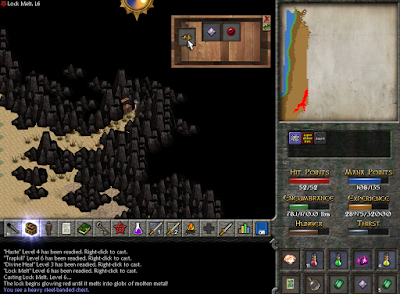 If you're feeling mettlesome: There are also ways you can traverse the narrow lava-filled gap in the  northwest to reach a large lava pool containing an island with a platform and teleportation pentacle,  and three treasure chests full of treasure and valuable rare weapons worth a lot of gold. 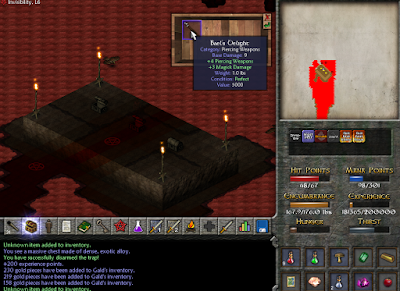 You'll be attacked by Brimstone Spiders along the way, so there's more to the challenge than just dealing with the lava. One way to overcome the lava would be acquiring boots with very high elemental resistance (possibly augmented with alchemy imbuements) and/or using spells and potions to grant you strong resistance to elemental fire damage.
(There is also a nest of Brimstone Spiders in the northeast, but no other reason we know of to go there if you're doing a zero kill run.)

The Amireth Grazelands
You can travel south of the Brimstone Lava Fields to reach the Thundersun Grazelands  (one of four maps comprising the larger region of the Amireth Grazelands), beyond which you'll find General Ghorr's stronghold of Talushorn.
As you cross the wide open expanses of Thundersun, you'll have to evade Taurax warriors, whose spear-throwers are significantly more dangerous than their scouts and legionnaires with melee weapons. (If you're relying on stealth rather than being able to cast Invisibility, crossing the open grazelands at night might make things easiest.) There is a treasure chest in the brush in the northwest, and a sack with some potions further southwest, and traveling can take you either further east or further south.
In the south you'll find the Southern Thundersun Grazelands, which is the stomping ground of a formidable  Taurax Legionnaire named Captain Rukka. If you want to use your spells, potions, stealth skills, or other tactics of choice to raid his camp, you can find some gear on a dead prisoner there, and also raid another Taurax chest further to the northeast with some Taurax throwing weapons you could sell.
If you'd prefer to head East from Thundersun instead, you'd reach the Ghar-Gha River where lava flows meet the coastline.
If you go either east of the Southern Grazelands or south of Ghar-Gha, you will finally find the corner of the coastal zone where the Taurax Stronghold of Talushorn stands in the southeast.

The Gates of Talushorn
There is a large Taurax stone called Karuku Rock that you can examine in order to quick-travel back to this area, and further to the southeast you'll find a heavily guarded front gate area leading into Talushorn's ground floor. As usual, invisibility will be the most straightforward solution to entering Talushorn, since you'll be able to walk up to the levers outside and pull them to open the gates.
If you're using stealth, it's easiest to camp elsewhere and wait for night to approach first. Even if the Taurax can hear you while you're invisible, they won't attack at random, but just stampede back and forth trying to find you (without success, as long as you stay invisible) while you walk inside. 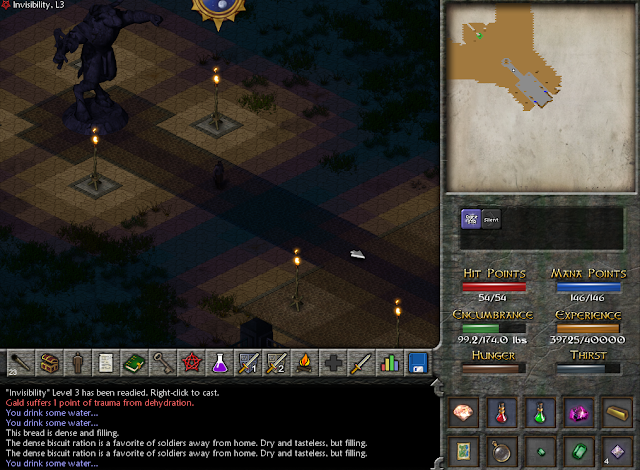 If you don't want to use invisibility or hiding in the shadows, then other good choices might include Dense Nimbus and Haste spells, or potion equivalents like Haste and Stoneskin. (If you're a rogue/thief character with stealth skill, it will also be far easier to infiltrate the stronghold if you only approach the Talushorn Gates at night, since the Taurax also don't have particularly keen vision after dark.)
Whatever method you use: As soon as you step inside the formidable halls of Talushorn, you'll be rewarded with 500xp for completing this latest branch of the main questline. Your next quest will be to survive the entire multi-floored compound until you reach the top floor of the Stronghold, where you'll find the inner lair of General Ghorr... 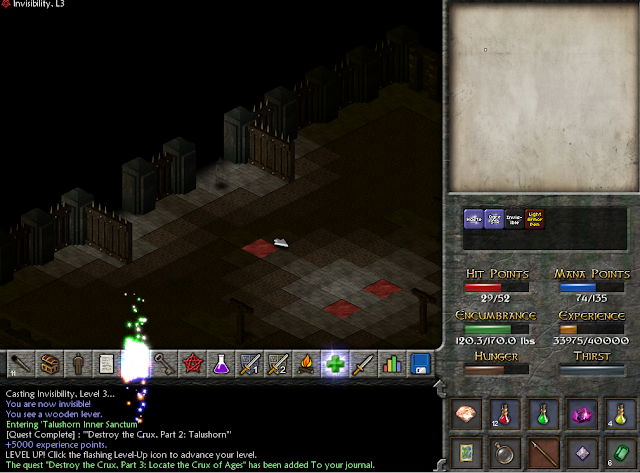 See the next section on TALUSHORN for the details about getting through the stronghold, and for the conclusion of the zero-kill pacifist run through Eschalon: Book II...