To complete the quest of claim the Crux of Fire, you'll eventually need to journey toward the snowy realm of Nor'Land, where you'll find the dwarven mountain town of Durnore. If you're doing a zero kill pacifist run, this is the only place we know of to acquire a key to the Hammerlorne Mines, which you must enter to seek out the Crux stone.
To reach Nor'Land and Durnore, you will have to travel through the Raven's Gate tunnel, under the mountain range leading to the snowy far north. And in order to reach Raven's Gate, you'll first have to journey to the Yoma River Headwaters, which you can reach by heading west of the Western Kessian Basin.
The route to Raven's Gate is found by following the main dirt road first west and then curving northeast through the forest. There is one treasure chest on a northwestern fork near the north edge, and there are more Red Wolves here also (shown above), but by now you'll probably have stealth and/or magick and alchemy skills to evade them without much trouble.

Raven's Gate: East Entrance
The Raven's Gate is a huge and guarded underground passageway leading through the range to the snowy realm of Nor'Land, where you'll have to make a journey over a large frozen lake to reach the Hammerlorne Mountains.
Raven's Gate is easy to find by following the main road to the northwest. You'll find a frosty obelisk just northeast of the entrance, which you can examine to add the Raven's Gate to your list of quick-travel destinations.
You can optionally also choose to make a side excursion by veering off to the northeast, after you come to the edge of the mountains. If you do that, you'll come to the edge of the northern coast, and can then turn back down into a fairly wide cleared area between the forest, infested by dangerous Devilmanders. (These beasts are fast-moving and dangerous, but if you have the stealth or magick skill to slip past them, you can find a dirt clearing with two treasure chests, amidst the morbid remains of some men who weren't as successful in dealing with the Devilmanders.)

Raven's Gate: Western Entrance & the Tundra
When you're ready to enter Raven's Gate,  you can return to the main entrance and head straight into the tunnel beneath the mountain. This is another area where you'll need a Citizen Writ to get past the guards at the armed gate inside the tunnel, before being allowed to enter the snowy realm beyond. (If you don't already have one for whatever reason, there is one in the south side road in Wolfenwood, at least one in Port Kuudad, and at least one more in the abandoned houses in Broken Blade.) 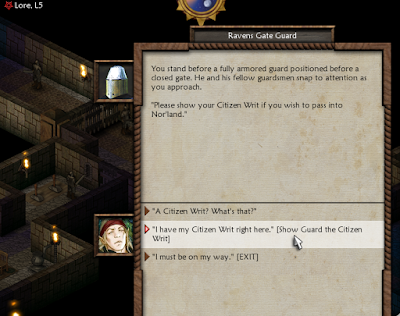 You'll see some evidence of the sad fate of someone who sought passage without a Citizen Writ in a side chamber, where you will find a frozen corpse of someone who died waiting in the freezing tunnel. (If the implied callousness here bothers you, you'll have the option to loot some chests inside the guards' barracks on the other side of the gate, after you present your own citizen writ to the guards.)
Either way, you'll now be able to follow the Raven's Gate passage as it turns to the southwest and exits into the snowy plain on the northern side. 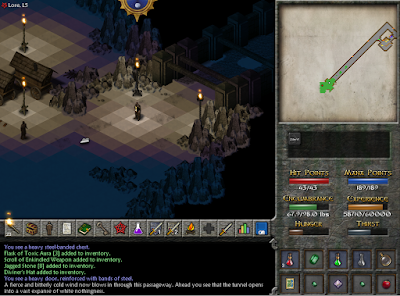 Here you'll find a man named Osgood standing next to a covered wagon: Osgood is doing good business transporting travelers from the Raven's Gate over the tundra and frozen expanses of "Hellice Lake," all the way to the dwarven mountain town of Durnore. He'll only charge 50 gp, so if you'd just as soon get to Durnore quickly, it's a worthwhile option. (You can return to any of the other maps at any time later, if you want to.)

If you are feeling adventurous from the start, however, you can travel on foot to up to four maps covering the expanses of the frozen terrain, covered in the next section...