There are two possible ways into the sewers underneath Port Kuudad:
One is found inside the city walls of Port Kuudad, where you can descend into the sewers via the stairwell entrance found in a building in the central/southwestern corner of the city. This will place you in the tunnels on the upper half of the map, leading either southwest or northeast of the entrance. 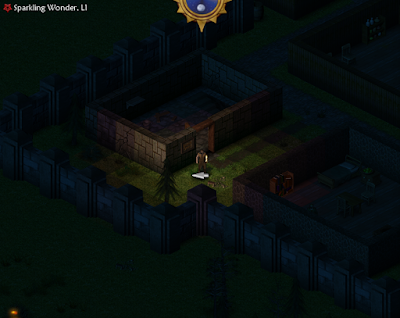 The other way in is via the rocky opening where the sewers flow out into the sea on the coast east of Port Kuudad, which would place you on the far southeastern part of the same map. (Getting in this way is also one possible way to sneak into the city without a citizen writ, though you'll have to be ready to evade the Bonebiter rats and black slimes on your way through the tunnels.) 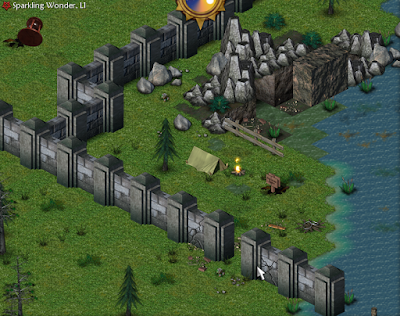 If you're heading directly for the Thieves' Arcadia, you'll find the passageway leading to its locked and trapped entry chambers by heading southwest of the city entrance. (You'll have to also solve a riddle that will require you to bring a lock pick, a bag of salt, a small candle, and a quill & inkwell. See the Thieves' Arcadia below for details.)

The Port Kuudad Sewers
If you want to explore the sewers, you'll find many treasure chests you can loot, as long as you're prepared to evade the dangers: The sewers underneath Port Kuudad are populated with large black rats called "Bonebiters,"  and also by more dangerous black slimes that can spew projectiles from a distance. The rats are fairly easy to repel with spells like Sparkling Wonder, while conglomerations of slimes are probably best avoided with stealth and/or the enchanter spell "Dense Nimbus," among other possible methods.
If you head northeast of the main entrance,  you'll find a tunnel branching north that has a treasure chest at the end. If you return and head to the northeast, you'll find the tunnels turning south.  There's a flooded side chamber full of slimes guarding a chest that you'll pass, then come to a junction. If you head east, there are more hazards but also some lock picks and a jade key that will open  the door far to the west to get into the Thieves' Arcadia entrance. (Make sure to save at least one lockpick for the puzzle you'll find beyond that.)
If you return to the junction and head southwest instead,  you'll find a bag of salt in an old barrel at the end, which is also one of the items needed for solving the riddle. (You can also find around three more random chests if you explore the tunnels leading south, and then turning in various directions.)

The Thieves Arcadia
The Thieves' Arcadia is where a player would eventually need to go to solve the quest "To Hunt An Assassin." However, since the dungeon can be a formidable place for any modest-level pacifist run character, we'll reveal in advance: There is no way to solve that particular quest without being obliged to kill the assassin you'll find at the very end of the dungeon. However, if you instead choose to abandon the quest when you get there and let him live instead, he will offer to train you in up to eight levels of Hide in Shadows, Move Silently, and Lockpicking (which means up to 24 skill points from more scarce xp-based level gains could be applied elsewhere). If you want to do the zero kill run but still "get back" at Darus' killer to some degree, you'll at least have the option of looting his chambers for a lot of valuable treasures before leaving.
You can technically enter the Thieves' Arcadia whenever you want, as far as we know, but the first direct clues that you should look here are given to you when you visit the Guild of Crius Vindica and speak with the two characters there about the Soulpiercer arrow that killed Darus in Eastwillow.
(See FORSAKEN COAST & GUILD OF CRIUS VINDICA for those details.)
There is also one more very good reason to eventually enter the Thieves' Arcadia: To claim one of the four strange bells that will enable you to eventually earn 30,000 xp by hanging all four of them on the belltree underneath Lockston Hall.

Entering the Thieves' Arcadia:
When you're ready to head to the Thieves' Arcadia, you'll find the entrance in the far northwestern part of the sewers (directly southwest of the city sewer entrance in the north).You'll come to a locked door with a fairly strong lock, so will need to either have decent lock picking skills, a fairly high level Lock Melt spell, or else just go evade the rats and slimes in the eastern sewer passage to get the jade key. After you unlock the door leading into the Thieves' Arcadia entrance chambers, it will open up into a chamber full of traps, and further onward you'll find chamber full of chests, with cryptic riddles written on plaques over each one.
This is where you'll need the items listed earlier to solve the riddle:

Place a lockpick into the chest whose riddle reads: "Where hammer and strength fail, may I succeed"

Place a quill and inkwell into the chest whose riddle reads: "I am a tool of absolute power."

Place a bag of salt into the chest whose riddle reads: "I swim the seas and crawl through the rocks."

Place a candle into the chest whose riddle reads: "A candescent drop upon an ivory tower."

Then throw the lever, and the hidden stairwell leading to the Thieves' Arcadia will appear. (You'll also be rewarded with more xp for solving the riddle to open the entrance.)

Inside the Thieves' Arcadia:
The subterranean Thieves' Arcadia is much more dangerous then the Port Kuudad sewers, since it is filled with very dangerous traps, and many "Shadow Assassins" who will ambush you, and can attack you in groups using ranged attacks.
To survive the Thieves' Arcadia without any violence, it might be best to wait until you have solid stealth skills, and/or a good stock of invisibility and/or haste potions, equivalent magick spells like haste, invisiblity, and dense nimbus (to deflect projectiles), among other possibilities.
After you enter the Arcadia and start traversing the rooms leading to the west, you'll come to one of a number of ambush points where shadow assassins will jump out at you and attack, unless you're able to evade them with stealth. There is also an empty chest south of the ambush point, which contains a deadly trap but no treasures inside. If you survive another ambush at the end of the passage heading south, you'll be able to head northeast through several doorways, to find a locked door with a strong lock.

The Treasure Room
If you're not able to pick the lock yourself, you can find the key by traveling southeast (but watch out for more traps at the end of the passage), and then heading northeast at the junction to find a trapped cabinet containing gold and also the Silver Key that opens the door to the treasure room in the northeast.
As soon as you unlock the door to the treasure room and step inside, there are assassins who will ambush you here and try to stop you. You can get around them most easily by using invisibility spells and/or potions, but can also survive their dangerous ranged attacks with the Dense Nimbus spell (or defense potions) and preferably the Haste spell, among other possible tactics.
The chambers containing the treasures are locked off behind gates with no locks. However, the lever to open the gates can be found in the side room in the upper west, where you'll also find some papers on a desk with the numbers 1799, 5236, and 6613. These are the combinations needed to open the three treasure chests after the gates are open.
This may be a bit of a challenge if you don't have invisibility potions or spells to keep, but will probably be well worth it: The gold and other treasures inside are valuable, and one of them is the Lutescent Bell (one of the four bells you can eventually hang on the bell tree underneath Lockston Hall for a reward of 30,000xp, after acquiring all four).
The Assasin's Lair
If you head south of the treasure room and continue southeast as far as you can go, you'll pass another ambush point a short distance above a room full of coffins, and eventually reach a point at which you'll find several chambers: A fletching room full of chests containing Soulpiercer arrows (just like the one that killed Darus), and the den of the "master assassin" Zeblin.
After speaking with Zeblin, you'll learn that he was the killer hired to murder Darus at the Inn in Eastwillow. He himself is only a cold-hearted assassin, however, and not directly involved in "The One's" machinations.
You'll now face a choice of options for dealing with Zeblin: There is no way that we know of to solve the "To Hunt An Assassin" quest at this point without fighting Zeblin to the death in a duel, but Zeblin will also offer you the chance to spare him in exchange for offering you training in the skills of "Hide in Shadows," "Move Silently," and "Pick Locks." (Even if you don't need the stealth skills, we recommend training in lock picking, due to the presence of at least two very high level locks near the end of the game, which appeared to be immune even to the highest casting level of the Lock Melt spell.)
You can follow your own conscience to decide what to do with Zeblin next, but you can optionally use stealth or invisibility to loot treasures from Zeblin's chest inside his chamber (which included a valuable recurved bow, among other things), before discretely exiting without being attacked.
There isn't any way we know of to bring Zeblin "to justice" without a fight, so if you're doing a zero kill/minimum violence run, at this point you can exit the Thieves' Arcadia the same way you came in.
The Portal spell may also work to enter/exit Thieves' Arcadia: Someone reported that the Portal spell actually worked for them to get out of Zeblin's chamber, even though that spell usually doesn't seem to work inside dungeon or underground areas. (Theoretically, it might also work to get back inside for training as well, though we didn't test it.)