This section covers the Thabarkin Crossroads Inn and the village of Gorelin, found further to the east.

You'll be able to receive a related set of quests between Thabarkin's Pale Stone Cave (see Thabarkin section), the Crossroads Inn & Gorelin Village (covered in this section), and the Skelden House Excavations (see Excavations section) that require you to visit all three areas. When all are completed, you'll be able to gain a good amount of experience and reputation with the Karga, Skelden, and Giriza factions, gain access to the gated Karga Clan Fortress (which is eventually required to complete the main storyline quests), and gain access to the gated Gorelin village controlled by the Giriza.

The Thabarkin Crossroads Inn
You can get to the Inn by following the road that heads roughly north/south to the west of the turnoff to Thabarkin's citadel (i.e. by continuing south down the hill, without taking the turnoff to the Thabarkin Gate and teleport, avoiding the higher elevation cliff road).
The Thabarkin Crossroads Inn is occupied by the Giriza, and is one of the relatively few places you can find nonviolent quests to gain reputation with their faction (since most of their other Giriza members will ask you to kill someone to gain reputation with the faction).

Stork & The Excavations Informant
The first Giriza operative to speak with outside the Inn is named Stork: He'll tell you that they are trying to learn what is going on in the Skelden Excavations, and that they already have an informant among the diggers, but need someone who can freely enter the Excavations to go talk with him. This will give you the quest "Withheld Work", which you can solve in the Excavations by visiting the digger (an imprisoned thief) named Armin.

You'll find Armin inside the Excavations digging pits. (See the Excavations file for other details about the quests you can get there.) Armin will tell you to "push off" at first, since he doesn't want Skelden soldiers to see him, but will give you the information if your persist, and you'll be rewarded with experience points. Then, after you return to the Inn and talk to Stork to deliver the information, Stork will reward you with gold, and you'll also gain increased reputation with the Giriza. 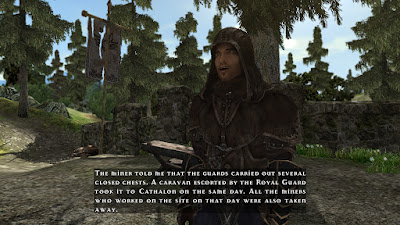 Keshi Lono & The Dwarven Artifact
The increased reputation with the Giriza that you gain from helping Stork will allow you to speak with Keshi Lono. (If you tried to speak with him before completing Stork's quest, Lono would just give you an unfriendly rebuff— unless you somehow gained reputation with the Giriza elsewhere.)
Lono then gives you the quest "Shadows Over the Family," claiming some unidentified enemy has thrown down the gauntlet to the Giriza. Apparently this mysterious adversary somehow turned the tables on the Giriza in their own occupied stronghold of Gorelin, as well as at the Excavations, where he arranged to have something valuable stolen from an Excavations caravan.
Lono will speculate that their mysterious enemy may have hired nearby bandits to steal the item from the Excavations caravan, and offer a reward if you can find out what it was.
The best way to complete this quest is probably to first visit the Skelden Excavations, because you'll eventually discover that the item Lono wants to see is the same Dwareven pre-war artifact that you can obtain (without violence) by completing Set Kistor's Quest from the Excavations. (See the Excavations for the full details about Kistor and the bandits who you will need to visit inside Silver Plate Cave to get the Dwarven pre-war artifact.)
Once you have the "Dwarven Contraption" from Finch, the bandit leader inside Silver Plate Cave, you can show the artifact to Keshi Lono. He won't understand why the enemy of the Giriza went to such lengths to acquire the contraption, but will nonetheless reward you with gold, experience points, and more increased reputation with the Giriza.
Unlocking the Gate to Gorelin Village
Completing the two quests above for Stork and Keshi Lono at the Crossroads Inn will enable you to have a good enough reputation with the Giriza to get the guard outside Gorelin village to open the gates for you, so you can solve more quests for both the Skeldens and the Karga Clan inside...
Gorelin Village is a gated Giriza stronghold in the hills east of Thabarkin stronghold. After you get involved with the quests involving the Karga Clan and Skelden House, this place becomes important.
(As described above, the best way we know of to gain enough reputation on a pacifist run is to do the Crossroads Inn quests from Stork and Lono.)
Zed Masara:
If you got the quest "Collecting Evidence" from Ethan in the Karga stronghold, he will have directed you to find the  anti-Skelden spy Zed Masara, and obtain some reports from him about the Skelden Excavations.
(If you were choosing to side with Skelden House instead, this Zed Masara is the same unidentified spy sought by the Skelden soldier Brokk. Siding with the Skeldens has problematic implications for a pacifist challenge run since they would eventually insist on attacking the Karga Fortress, but we don't know if there's a way to still solve the quest for Brokk in the short-run without also causing Masara to be killed, and still side with the Karga Clan in the end.)

Either way: Zed Masara is found inside Gorelin Village, and you can get the documents from him here. He'll tell you that he has an old grudge against Erbat Skelden, but that Brokk is suspicious and the documents were all he could obtain.

Estar Gren:
If you have been to the Skelden Excavations and received the quest from Sanno Moon to find the missing "package" he was expecting to be delivered, you'll find the courier inside Gorelin: His name is Estar Gren. Sanno Moon told you to teach Gren "the meanin' of the word responsibility," but you can complete the quest without using violence by just speaking with Gren: 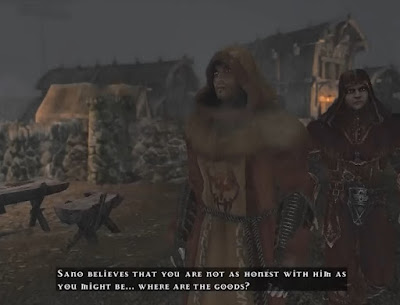 After telling him that Sanno Moon thinks he is shirking his duty, Gren will tell you that he lost the package to a Karga raid, and doesn't want to antagonize any of the three sides involved: The Skeldens, the Karga Clan, or his own Giriza thieves and smugglers.
Gren will say that he knows where the Kargas have the goods, but that there is no way he will go up against the Karga Clan himself, since his own Giriza recognize the Kargas as the true power in the mountains, and would skin him alive if he antagonized them. However, if you demand that Gren give you all the information and the money, he'll oblige. 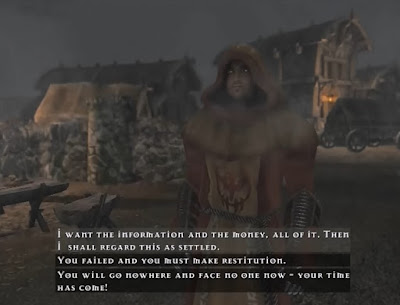 After learning that Moon's item is in the Karga Supply Cave, it will trigger a quest called "The Devil and the Deep Blue Sea" suggesting that you might have to kill the Karga guard at the supply cave, but you won't: As long as you gained some reputation with the Karga Clan (e.g. by helping Eras Brakalet at Pale Stone Cave, or alternately Ged Sammra from Thabarkin), then the guard named Serpen will recognize you as a friend of the Kargas, and let you inside with an invitation to take any supplies you need. Moon's package is the item called "The Cure," which you can find on the ground inside the cave, and bring back to Moon for a reward and increased reputation with the Skeldens.
(Note: You could probably also complete Moon's quest without speaking with Estar Gren by just taking the cure from the Karga Supply Cave and bringing it back to Moon at the Excavations, but if you skipped speaking with Gren in Gorelin, you might miss some rewards.)

There is also a man inside Gorelin who will tell you about an angry spirit of the mountains called "Ironshoes" that has been killing people in their sleep, but we never found any other quest involving this mystery. (Some of the Skeldens who mention the Ironshoes legend will state that it's just a myth, and that the actual killings are committed by Karga Clan men to punish anyone who aids the Skeldens, but we never found out the truth.)