Komorin village is the first settlement you find after descending from the mountains, if you follow the main path down from Throglin Temple: After sneaking or running past a camp of Groms along the main road, you'll see the log stockade walls of Komorin, and can enter freely to speak with the villagers there. (See the previous section for quests involving Gandohar and the main storyline.) 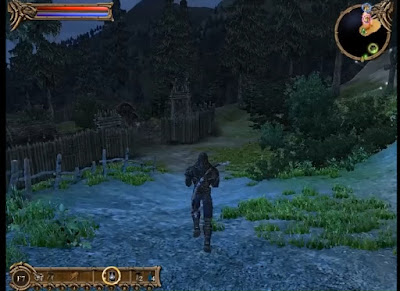 Most of the side quests originating around Komorin Village can be completed without the player having to use any violence.

Quests:
"The Moon Eye" and "Edvin from Brumhill"
A merchant named Veran Korstill lives at the northern edge of Komorin near the gates, and will engage you to go to another village and purchase a large "Moon Eye" mountain crystal from his associate Edvin. Korstill wants the crystal as a present for his wife, and will advance you 500 gold pieces to purchase the crystal.
The village of Brumhill was recently built in the northeast, in the mountains within view of the Glacier. Before leaving, also see the quests from Nalax Gonga (and possibly also Ferid Redismos, who will enable you to active teleporters) below:

Quests:
"No News from Brumhill" & "Brumhill Village"
In the upper market grounds, a man named Nalax Gonga will tell you about the villagers from Komorin who left to build the settlement of Brumhill near the glacier, in order to reduce the burden of taxation from the Crown. He is very concerned for the villagers, however, as he has had no news from Brumhill for some while. He consequently offers you some gold if you'll travel out to Brumhill village and check on the villagers.
Brumhill Village
When you're ready to make the journey east to Brumhill Village (which will be marked on your map after you receive the quests above): You will make the grim discovery that it has already been destroyed by savage Glacier Orcs, who have razed it to the ground and are still making camp in the charred ruins.
The Glacier Orcs in Brumhill's ruins would be tough opponents for a low-level adventurer to fight with, but a pacifist challenger can still get past them pretty easily by outrunning them and grabbing the crystal (possibly leading them out of the ruins a ways first before doubling back, to get them out of the way first), or by using the Sneak skill to sneak past them without them ever seeing you.
You'll find the Moon Eye crystal lying on the ground in front of the doorway of Edvin's razed hut, and can pick it up without the orcs spotting you if your sneaking skill is good enough. If you have trouble for whatever reason, you could also return after buying some non-lethal immobilization spells like Earth Chains (lv1 earth magic) or Freezing Wave (lv2 Water magic), which will enable you to freeze the orcs in place for more than enough time to grab the crystal and run away.

Solving "No News from Brumhill"
All you'll have left to do now is return to Nalax Gonga and deliver the bad news about what happened to Brumhill. He will be shaken by the news, but will still thank you and reward you with some gold from Gonga, and you'll receive experience points.

Solving "The Moon Eye"
When you return to Komorin and tell Veran Korstill about Brumhill, he'll make a remark about the bad news, and then inquire if you found the crystal. When you give it to him, he'll thank you and pay you more gold, and you'll also receive experience points and increased reputation with the Merchant's Guild (which will give you better buying and selling prices when trading with members of the Mechant's Guild, and also open doors to many more highly rewarding nonviolent quests later on).

Mage Ferid Redismos & The Ancient Teleports:
(Quest sequence starting with the quest "An Old Friend")
You'll find the mage Ferid Redismos south of Komorin, near one of the mysterious deactivated teleporters. Redismos is researching the ways and means of reactivating their powers. To do this, he needs you to take one of his teleporation activators to a teleport further out in the mountain roads (which will automatically be added to your map, as usual).
There are some small but feisty reptilian creatures called Reapers nearby, but you can either sneak or run past them and activate the teleport without fighting, then return to Redismos to be awarded with increased reputation with the Society of Mages.
Even more importantly, you get to keep the activator stone so you can use teleporters throughout the realm yourself from this point forward: All you need to do first is pay each teleport a brief visit while you're carrying the activator stone, which will cause the teleport to flare up with magical energy and become active for the rest of the game.

Magnesite Crystals for the Mage:
Ferid Residmos will also offer to build you several more teleport stones if you bring him Magnesite crystals, which are needed to build them. 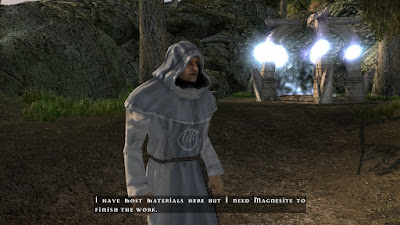 You can find magnesite crystals in a number of places:
One fairly easy place to pick them up is further west in the mountains near Covengor village, where you can find "The Thieves' Cave."
There is a magnestie crystal outside on the slope behind the cave, and at least 2-3 more inside the cave. (The cave is also full of skeletons, but they're easy to outrun or sneak past without too much trouble. See the COVENGOR section for other details about the cave and Covengor area.)
Other places you can find magnesite include the Grom war camps where the goblinoids have built sacrificial rock heaps featuring a central horned totem, severed heads, and also magnesite crystals.
The "Grom Siege Cave" area south of Komorin is the nearest of these war camps, and you can spot it fairly easily from a distance since it is inside a stockade beneath some huge rock crags.
If you want to wait and upgrade your Sneak skill so you can sneak in using stealth and never be seen by the Groms, you can take the magnesite crystals and Grom "goblin totems" that way. (However, it's also fairly easy to just run into the camps, lead the Groms on a runaround to get them a short distance from the mound, and then run away after grabbing the items. 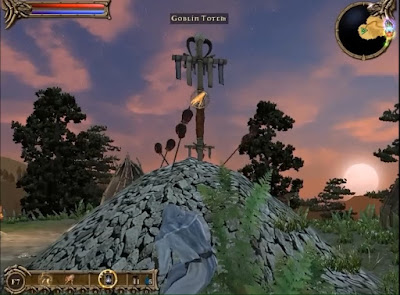 Also note that you'll want to collect and keep at least three of the horned goblin totems for another pacifist run quest ("Ruining the Groms' War for Them) from a Skelden man named Menno Heragerard later in the game.

Returning the Magnesite to Ferid Redismos:
After bringing the Mage his magnesite, he will give you a total of three teleport stones, which can be dropped in any outdoor location in the open world to create a teleportation node linked to all other teleporters, which is extremely convenient. (To use them, just double-click the stone in your inventory and it will fall on the ground and become active. No NPCs in the game will ever steal these if you leave them lying on the ground, by the way.)
Unfortunately, after giving you a number of teleport stones, you'll learn that Ferid's action of inviting you into the network of ancient teleportation devices has aroused the opposition of the Society of Mages, who have ordered him to stop helping you— but Ferid Redismos won't come to any harm as a result of this, and it won't cause you to lose any reputation with the Society either.

There is also one more non-pacifist run quest originating in Komorin, but as far as we know there's no way to deal with it peacefully:

Questbook names: "The Troubled Horse Breeder" & "Extortion"
Lucius Darx (found directly outside the southern gates of Komorin village) is a warrior form the Brotherhood, and will tell you that the horse breeder Vesit Delurna (whose corral is along the nearby roads south of the village) needs a gang of bandits dealt with. Delurna has asked the Brotherhood for help getting rid of the bandits, but the Brotherhood men are short-handed due to the war in the South against the orcs and the Grom raids in the North, so Lucius Darx asks you to go help Delurna for them. You can let your own conscience be your guide about whether it's more virtuous to aid Delurna by dealing with them, or skipping the quest. (There's way more than enough xp to reach a high level in Two Worlds even on a "purist" pacifist run, so you won't be under pressure.)
The bandits lair is in a cave next to the mountain lake a short distance northwest from Delurna's stables. For those who want to get rid of them without directly using violence: You could cast a Fire Magic spell called Chaos Rage that will make the bandits turn on each other and fight each other, among other possible "grey area" approaches (like summoning creatures).
Another approach might be to lead the bandits back to Delurna and let him and the men near his stables deal with them (though this might not work on harder settings where the bandits deal maximum damage).
(Using either approach, you could also come back with the level 15 Air Spell "Ressurection" to revive the bandits after "teaching them a lesson.," after which they're remain peaceful.) Either way, after reporting your success to Delurna, you'd with experience points and increased reputation with the Brotherhood.