The lower levels of Ironpool Dam and the haunted sinkhole containing the ruins of Lost Westwillow can be reached early on, but are a bit challenging for a low-level player character.
In order to gain access: You may have already visited the Ironpool Dam early on, when visiting Greenriven Lake, and completed the side quest "Secrets of the Deep." If not, you can visit Minus, the retired owner of Eastwillow Magicks, at his house on the western shores of Greenriven Lake again.If you talked to Minus after he suggested that you visit Saint Gilhelm to identify your strange viewing glass, he will also have told you the story of Lost Westwillow, a mining town which was submerged in the deep when the Ironpool Dam was constructed.
Minus also tells you that the Dwarven engineer at Ironpool Dam, Brudo, knows more about the haunting beneath the lake than he may let on to outsiders, but suggests you give Brudo a Dwarven blessing to earn his trust. Visiting Brudo again and speaking this dwarven phrase will complete the subquest "Secrets of the Deep," after which Brudo will open access to the haunted lower levels of the Ironpool Dam....
Ironpool Dam: Lower Levels
Whenever you're ready to venture into these dark places (ideally with improved stealth, magick, and possibly the "Turn Undead" Divination spell), you can enter the lower levels though the gates that Brudo opened a short distance behind his own chamber (just northeast of the entrance of the ground level of Ironpool dam). We'll also warn in advance: If you're doing a strict zero kill run and don't want to destroy anything (including undead), you should probably have some decent lock picking skill in order to claim the Cerulescent Bell and several other treasures you can find by descending toward Lost Westwillow.... 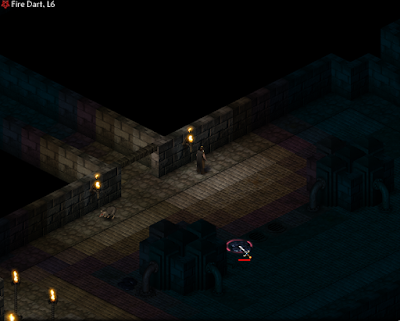 After you descend the stairwells to Ironpool's lower level, you'll have to head south into some larger chambers with some black slimes squelching in watery pools and corridors. (At least one of them is carrying a key, but you can pick open any locks you find here yourself, as long as you have enough lock picking skill.) The first passage leading southeast is blocked, so you'll have to go southwest first. You'll come to a room with a powder keg and two paths:
In the north, you can open a gate with a lever to find a burial chamber and some urns belonging to Dwarves who dies building the Ironpool Dam. (If you're a grave-robbing thief despite any pacifist run scruples, you'll be attacked by several Dwarven Spirits that manifest if you look inside their urns.)
In the south, you'll come to a locked door in the south-eastern passage, but you can pick it open. 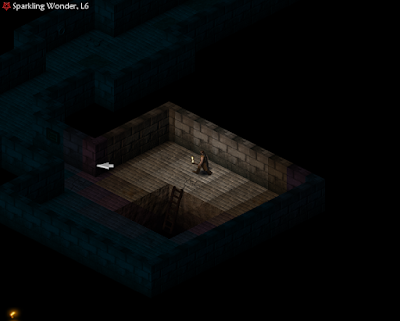 Heading northeast from the lower passage beyond this, you'll find a side chamber with an ominous deep pit in the room, but your player character will examine it and deem the ladder too rotted to hold your weight, so you will have to continue onward to find a way into Lost Westwillow. Further ahead, you'll also pass the blocked passage from earlier on as you proceed northeast, to a large room with waterflow control gates operated by nearby levers. 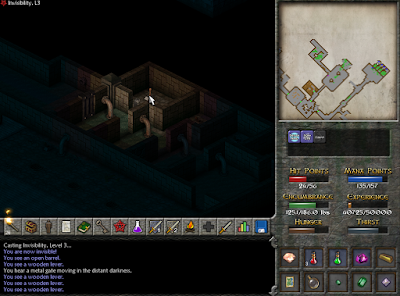 For some reason the Ironpool Dwarves kept weapon racks here, and if you proceed through the northwest closed gate (after again operating a lever nearby to open it), you'll soon find out why: Restless and angry undead from the depths will soon be encountered in the chamber beyond.
Lost Westwillow
After you get past the gated chamber containing undead in the lower levels of Ironpool, you'll find yourself on a dark narrow path leading into a huge underground sinkhole that has formed a giant cavern underneath the lake. The drowned ruins ruins of Lost Westwillow fell into this sinkhole long ago, and the place is filled with angry and restless undead.
If you've got stealth skills, invisibility, or the turn undead spell, getting past them shouldn't be too difficult, provided you don't allow clusters of them to surround you. The skeleton archers are perhaps the biggest threat here, but the Dense Nimbus spell should be effective at times when you're unable to use stealth or invisibility to sneak past them without being seen.
A river bisects the huge sinkhole cavern, and if you make your way to the northwest, you can find a treasure chest in the ruins. Crossing the northwestern bridge near a ruined structure will bring you to a more clearly marked path and an old open building containing Mayor Theotus. 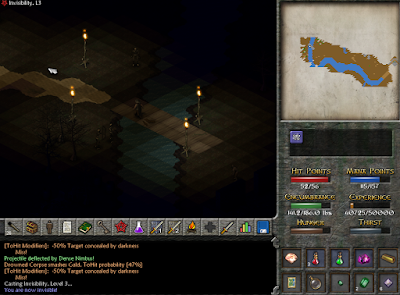 Mayor Theotus is undead like the other denizens of Lost Westwillow, but he will be civil toward you and tell you the story of Lost Westwillow:
Theotus will tell you that the anger preventing Lost Westwillow's grudge-bearing undead from finding peace in the afterlife is continuously enflamed by an evil spirit called "The Prospector," who haunts the ruins in the southeast...
If you're doing a strict "zero kill run" and don't want to destroy a single being, you can still enter and explore this entire area as long as you have enough skill in "Pick Locks" to open several strong locks. (If so, you'll still be able to claim one of the four bells you need to complete the belltree beneath Lockston Academy for 30,000 xp, after you find all four bells.)

"The Curse of the Prospector"
The only way to solve this quest is to "banish" the evil ghost that is causing the haunting. If you destroy the Prospector, it will count as one "kill" against you even though he's a ghost. (We tested it in the past to find out what happens in the story, but if you don't want to do it, you'll still easily be able to win the game as a purist zero kill run without completing this quest.)
If you decide to confront the Prospector, you'll find him lurking inside the eerie illuminated ruins in the southeast, with several locked buildings amidst some dead trees:
The Prospector is not an easy being to deal with, as he is immune to being struck with physical weapons, and also strongly resistant to a substantial amount of combative magick spells. He also summons more undead to attack you if you confront him. The Prospector's main weakness is that he won't restore himself to full health after time passes, even if you retreat temporarily and make camp elsewhere in the cavern. Whatever method you choose to use to "banish" the Prospector, defeating him will cause him to drop a key you can use on the nearby buildings, and you'll then be able to return to Mayor Theotus. Theotus will tell you that he can already feel the anger of the undead subsiding now that the Prospector has been banished, and he will be grateful to you for helping Lost Westwillow finally find peace. This will completely "The Curse of the Prospector" and reward you with 2000 experience points.

The "Wraithbiter" Spear
One possible way to gain an advantage over the prospector (or just to claim a unique relic worth a lot of gold , if you're giving that battle a miss) is to venture to the northeast corner of the map beneath the river, near where the subterranean waterfall tumbles over the cliffs. You'll find a narrow tunnel containing several dangerous barriers of electrical energy: On the other side of the barriers is a magickal weapon called Wraithbiter that can be effective against undead.
(We don't know any way to disarm the barriers, but using potions and spells to increase resistance was effective enough to claim Wraithbiter and escape alive, despite taking significant damage each time we passed the barriers.)

The Treasure Room & The Secret Island (Cerulescent Bell)
Even if you chose not to take on the Prospector, you can still raid his treasure room by picking the lock of the building just northeast of his main lair, and find his hoard of gold inside two treasure chests.
You will then find yourself on a small grassy island in the middle of Greenriven Lake, surrounded by water. There is a chest on the island containing the Cerulescent Bell. There is no normal way off the lonely island (e.g. by boat), but there are no foes here either, so if you're ready to leave Lost Westwillow, you should be able to use the island to quick-travel or cast the portal spell.
As for the four mysterious bells: If you already retrieved all three other bells from The Hammerlorne Mines, The Thieves' Arcadia (beneath the Port Kuudad Sewers), and Lorewitch Tower, you may now have all four needed to take the bells to the underground halls beneath Lockston and Port Kuudad: As soon as you hang them all on the belltree there, you will earn 30,000 experience points. (If not, the others can be found in the the three locations above, with details described in the separate guide sections for each.)