The first game in the Thief trilogy, "Thief: The Dark Project," was originally released in 1998, and was highly influential on the stealth gaming genre. Despite being a dark game, Thief was noteworthy in its time for being one of the earlier games to not only make it possible to completely avoid kills, but actually to reward players for having the skill and ingenuity to win using only stealth and non-lethal tactics.
It may not be everyone's cup of tea due to its dark setting and mandatory casting of the lead character as an overtly cynical gold-greedy thief, but G.W. Trevelyan has been playing Thief: Gold (the updated and upgraded version of the original "Thief: The Dark Project" release) and gives it a rave review so far. In many cases it's not only possible to get through areas without killing, but also without even inflicting damage on anyone, depending on how high your tolerance is for very patiently hiding in the shadows (and reloading saved game files when you accidentally get spotted by adversaries).
There are at least three games in the Thief Series:
Thief: The Dark Project (now re-released and updated as "Thief: Gold")
Thief II: The Metal Age
and
Thief III: Deadly Shadows

At least the "Thief: Gold" edition of the first game has been declared to be a full zero kill run-enabled game by numerous sources, stating that no kills are required to win the entire game.
As for Thief II and III: Other sources from brief online searches seem to give mixed reports about whether a complete zero kill run is possible, but it can be difficult to get a straight answer when relying on sources like forums, since many forum posters overtly dislike the concept of trying to win a game without kills...
Some posts we discovered on the subject of zero kill runs in Thief II and III featured complaints by other players stating (more or less) that even though they thought the games were fantastic, they felt they should have been allowed to kill more people even on the higher difficulty settings without penalties. But from our point of view, of course, this is actually good news and grounds for optimism, since we want to play on the highest difficulty settings without killing anyone at all...
Thief I also stands out as being a game in which increasing the difficulty level settings adds new depth to the game far beyond just increasing the in-game enemy population: Choosing the "Expert" difficulty setting not only alters the mission objectives to impose more demanding requirements  (no kills being one of them), but also enriches the in-game plot by adding detailed subquests and NPCs in some cases.
For example, playing the second Bafford Manor mission on "Expert" merely raises the value of the amount of loot that must be stolen, and adds the command: "Don't kill anyone while you do the job. No servants, no guards, no pets... no one," which is all to the good. However, the third quest, in which the thief must break into a haunted mine in order to use tunnels to infiltrate Cragscleft Prison, has even more interesting objectives:
"Normal" requires only getting into Cragscleft Prison and breaking your imprisoned associate Cutty out, without any impositions against killing. Ratcheting the difficulty up to "Hard," however, not only requires the player to escape the complex with looted Hammer Tenet religious treasures worth at least 500 gold coins, it also adds an entire new NPC's background story: Apparently Issyt the Beggar "borrowed your hand of glory"— and now the Thief wants this macabre occult item back again. (The "hand of glory" happens to be an actual historic and grisly item from English occult history, by the way, and one that would be of definite value to thieves, if its reputed powers worked the way the folklore suggested...) 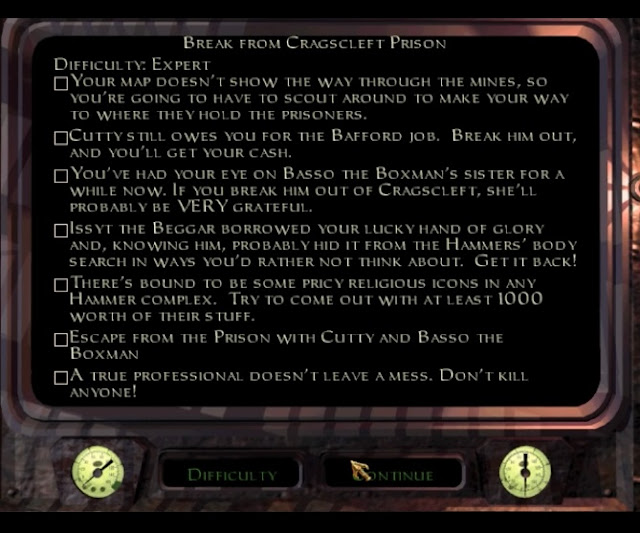 Finally, as shown above, setting the difficulty to expert causes the objectives change to impose the ban on killing anyone, raises the treasure haul's value to 1,000 gold, and adds a third NPC named "Basso the Boxman" to find and rescue from the prison, along with Cutty. So the higher the difficulty level chosen in Thief, the more interesting both the gameplay and the plotline become, as well as providing obvious assurance that there definitely is a way to win this mission without being forced to rack up any unavoidable "kills."
Interestingly, it sounds like players inclined to default to being killers in the Thief series are also likely to get more than they bargained for: We never tried to kill anything, but if one did, the game reportedly has dynamics built-in that would require macabre activities like dragging corpses hither and thither to try to hide them in darkness to avoid being caught, and cleaning up bloodstains by wasting valuable water arrows, among other things— all greatly increasing the chance of discovery by other guards.
As for being discovered by the guards/enemies found in Thief: This is something even a strict pacifist player is likely to experience at least a few times, since developing perfect stealth is a skill that takes practice. As the Thief manual warns players "You are not a killing machine," and being "one-shotted" (killed in a single blow) by a sword-swinging guard can happen very easily after blundering into a patch of torchlight, or accidentally making too much noise.
In other situations, it's possible to be spotted by the guards, but flee to another part of the Manor and re-conceal one's self in the shadows without being slain— though the more the guards get riled up, the more difficult it becomes to loot the place without hassles, for obvious reasons. Guards in some missions also bang gongs or raise alarms that place all their compatriots on high alert, sometimes significantly change the objectives of the mission... 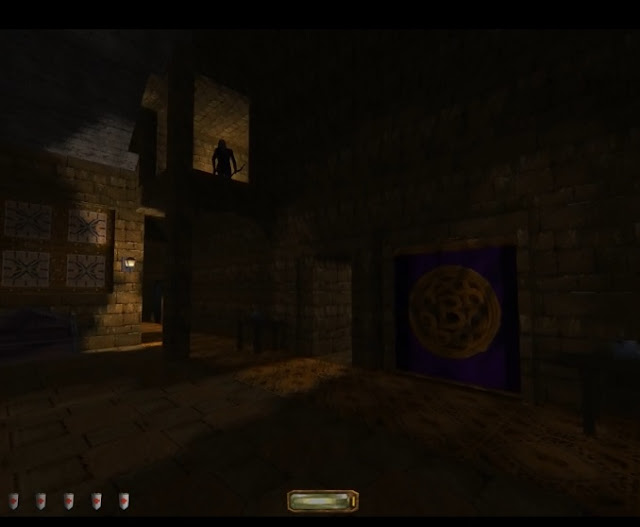 For example, a later mission involving infiltration of a criminal money-lender's heavily guarded town fortress will only require you to exit into the streets if you avoid raising the alarm after completing the main objectives. However, if you are spotted and allow guards to raise the alarm, you will also have to work your way through a large network of nighted city streets, and make it all the way back to Garrett's own home turf to complete the mission.)
One word of warning about Thief: Gold before concluding: If you're thin-skinned and can't take being called "taffer" a lot by English-accented guards, brace yourself, because the guards on duty at Lord Bafford's Manor (and elsewhere) will probably call you a "taffer" dozens of times— both before and after they spot you. (Even if you're a born master of stealth who never breaks your cover the whole way through the mission, they'll almost certainly still call you a "taffer" as soon as they hear you creeping through the darkness, even if they never actually spot you.)