This one crossed our radar when we stumbled on a Gamer.com article, which surprised us by stating that Batman never actually kills any of the swarms of villains he busts up in these critically-acclaimed action-adventure video games. 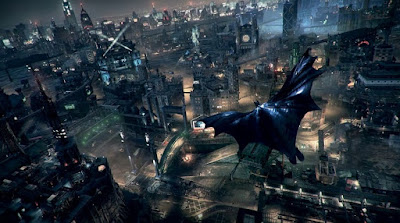 We're no expert on Batman's legacy, but apparently there was once a tradition for Batman to avoid killing any of the enemies that he was obliged to beat up in the course of his heroic duties— including even his arch-enemies like the Joker. This was our impression from glimpses of the retro Batman television series episodes that used the "BAM!" or "POW!" splash-screens to bowdlerize the implied violence in fight scenes, though later films departed from the tradition.
Either way, regardless of what the films allowed: Apparently there are multiple "Arkham" series Batman games that not only involve the option to win with zero fatalitites, but according to an article on Gamer.com: "...go to great lengths to make sure you can’t break Batman’s “one rule,” including putting invisible walls up when you try to push enemies over a ledge." 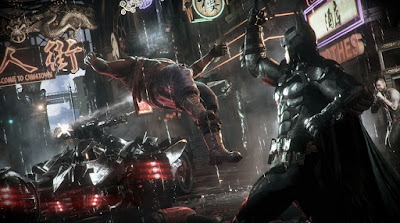 Zap! Bam! Pow! (But no fatalities, according to contemporary accounts.)
It might take us awhile to get to this series, since they still sound like overtly violent beat-em-ups in which the no-kills rule is already built into the game universe (i.e. without the added fun of making a special effort to avoid the violence). However, we've also heard that the games incorporate stealth gameplay, so maybe we'll take a look later on and see just how nonviolentally Batman can solve Arkham's crime problems...