SWAT 4 is another tactical shooter we probably would have overlooked if it hadn't been recommended by other pacifist-run gamers. Apparently this game not only features an unusually large array of non-lethal weapons, but also awards highest scores to players who defeat and capture every suspect in the game alive. 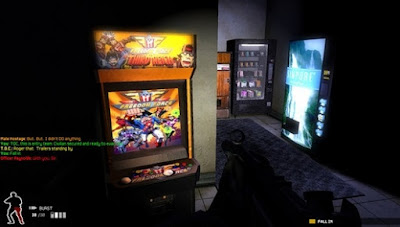 The zero kill run makes sense, since SWAT 4 puts players into the role of a member of a swat team expected to follow police procedure and use non-lethal force whenever possible. Accidental killing of hostages also apparently results in automatic mission failure.
According to Wikipedia: "...players must follow strict protocol to ensure proper use of force. Players may not fire on suspects with lethal weapons unless the suspect points their firearm at a fellow officer or a civilian. Penalties are given for unauthorized use of force, injuries to hostages, officer incapacitation, and personal injury." So apparently this isn't the place to act out one's Mad Bull 34 or Wendell "Bud" White-inspired fantasies about cops playing by their own rules.
While our preference is always for a "pacifist run" that minimizes violence (rather than just providing a lot of nonlethal weaponry), the array of nonlethal gadgets in SWAT4 definitely sounds noteworthy: non-lethal shotguns firing beanbags, pepperball guns, tasers, and "tactical equipment" with gas canisters and something called an "optiwand" (?!) that we'll have to learn more about when we play the game.
So for those who are procedure-oriented and looking for a police action simulator that can be won with zero kills, SWAT 4 sounds like a pretty good bet, according to what we've read.