Thanks to a GOG.com forum post, here is another prospect: A zero kill run "espionage RPG": Alpha Protocol. Reportedly another zero kill run game with a military/stealth theme, Alpha Protocol puts the player into the role of a "covert operative" with a lot of weapons and martial skills, but also some features of interest to a pacifist challenge player...
Players have to take on the role of the lead character (Michael Thornton, a member from a 'black ops' agency) rather than design their own, but later on get to choose which skills to develop as they play, enabling them to focus on stealth skills, gadgetry, bypassing security, and other non-lethal measures that can reputedly be used to win the whole thing without any kills. 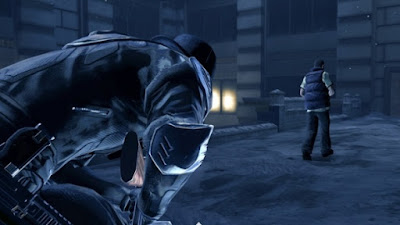 Apparently the player visits multiple cities, and has a "safe house" in each one to use as a hub, with access to computers and an online black market site to buy supplies, including non-lethal ammunition for the pistol.
We haven't tried this one yet, but found a reference from a blog post confirming that it definitely is a zero kill run here: "Alpha Protocol Can Be Completed Without Killing a Soul."