The "Elder Scrolls V: Skyrim" is a 3D RPG first released in 2011, with an archetypal fantasy plot and final objective of defeating a world-eating dragon. At minimum, it sounds like Skyrim is on par with RPGs like Two Worlds in that it gives players an absorbing "open world" that the player can explore peacefully, with many quests that have nonviolent solutions, and the ability for players to indefinitely postpone the primary quest objective for as long as they want...
But is the legendary Skyrim actually possible to complete as a zero kill run? We haven't been able to confirm whether the whole game can be completed without killing anything, or whether it's just another solid "pacifist challenge" open world RPG that allows players to spend many hours exploring and enjoying nonviolent gameplay. Either way: It looks like a game nonviolent RPG fans could easily get engrossed in for huge spans of time even if they never got around to formally completing the entire game. 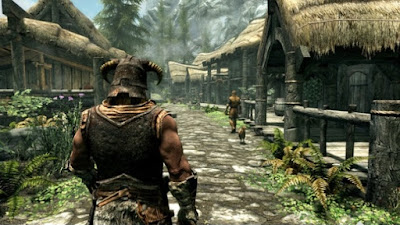 Skyrim has even generated a bit of mainstream media attention based on the efforts of pacifist run players who enjoy wandering around in the beautiful open world using purely nonviolent tactics. The Wall Street Journal published an article about this called "Videogamers Embark on Nonkilling Spree: 'Pacifist Run' Wins Bragging Rights; Spells, Not Swords," focusing in particular on a Skyrum pacifist run player known as Felix the Peaceful Monk. Quoting that article's description of the "pacifist run" phenomenon: "Videogames have long been assailed for their violent themes and gruesome imagery. But a small slice of players has embraced a new strategy: not killing. They are imparting real-world morals on their virtual-world characters and completing entire games on a "pacifist run"—the term for beating a blood-and-guts adventure without drawing any blood."
One very nice nonviolent asset Skyrim gives players is a spell that allows players to not only stop enemies like wolves from attacking (like the freezing wave spell does very effectively in Two Worlds), but also temporarily calms them down and makes them friendly for a period of time. (This is a nice alternative to the more common type of charm enchantments that tend to bewitch NPCs so that they automatically start attacking their own former allies or cohorts— assuming the non-lethal spells even work in the first place.)
Regarding open-world RPGs in general: We're not sure exactly which game was most historically influential in defining the 3d "open world" format seen in live-action RPGs like Two Worlds, Skyrim, Gothic III, etc, but they all seem to have similar systems of allowing players to invest in building skill in some mixture of combat, magic, and stealth (often including sneaking and picking locks, as well as picking pockets). The open world concept combined with the ability to complete chosen subquests of one's own choice in a nonlinear sequence definitely lends itself nicely to a pacifist run, since players can focus on maximizing the gains from as many nonviolent quests as possible. (Once in awhile this can make a crucial difference later on in dangerous encounters, such as when one can easily avoid violence with upgraded skills that require quite a few level gains.)
Some nonlinear open-world RPGs can even make great quasi-casual games for players who aren't worried about solving quests. The first time we played Two Worlds I, we spent several hours in "sneak mode" admiring the scenery and wildcrafting (not because we weren't interested in the quests and plot, but just because we were so impressed with the scenery and ability to find flowering herbs and toadstools growing in the wild that we ran out of time that night). It sounds like some Skyrim players do the same thing: We ran across a quote from a Metafilter user who shared that: "I played a lot of Skyrim and mostly just liked picking flowers and riding my horse." So it's clear that the peaceful potential of "open world" RPGs isn't being overlooked, whether or not the entire game's primary plotline can be resolved without dispatching a single foe...