Mark of the Ninja is another stealth game that reportedly provides players with a zero kill run option. It has a plotline involving conflict between ancient ninja traditions and modern technology, and stands out from the pack by being a "side-scroller" rather than using some type of 3d engine.
One way Mark of the Ninja apparently diverges from normal side-scrollers is by using line-of-sight dynamics in which the player can only see enemies that would be visible to the in-game character.
Otherwise, it sounds like the game incorporates familiar stealth elements of hiding in the shadows, avoiding detection by trying to move as silently as possible. 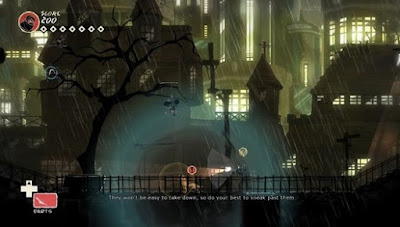 It also throws in more horrific elements for players who want to indulge themselves in "kills" and carnage, like terrorizing enemies with particularly gruesome tactics to make them panic. (Geez, since when were Ninja assassins such a bunch of jerks?) Nonetheless, we've also seen this on several lists of games asserting that it could be completed as a full zero kill run, without having to indulge in the usual array of assassinations, stealthy "one-hit kills," and so on.