Traveling to this map is optional early on, but it's where you'll need to go if you want to solve "A Letter From Wendy" and/or "A Den of Dragonels." (See the section on EASTWILLOW / YOMARIVERVALLEY for details on how to initiate the quests.) Inside the house in the northeast, you'll also eventually be able to solve a riddle in order to find a book that will grant you access to the underground levels of Lockston Hall in Port Kuudad, where you can eventually gain a huge amount of nonviolent experience points after performing some more challenging but nonviolent several tasks. (See details below.)
If you're arriving at a low level, you're likely to have to do a lot of running around being chased by Dragonel swarms and brutish outlanders, who will all try to kill you on sight. (On that note, if two groups of pursuing foes lose sight of you, they may also turn on each other and start fighting, unless you use stealth so they never end up trespassing on each other's turf.)
"A Den of Dragonels"
If you want to aid farmer Anwick with the Dragonel infestation that destroyed his sheep, you can find the hive in a grove of trees in the northwest part of the map. It's possible to blow up the nest without killing any dragonels, but is very time consuming at a low level with only a modest firedart spell. 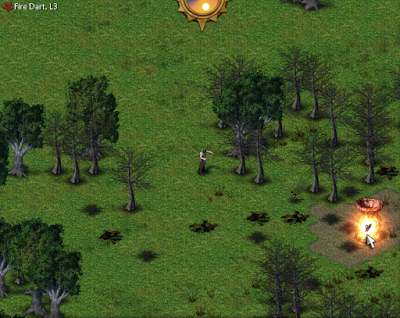 Carrying at least one powder keg out to the nest would make the process a lot easier, but more dragonels will periodically drop out of the nest as you whittle away at it, which means you'd have to run around avoiding them if you're going for zero kills. Coming back later with spells or potions like haste and/or invisibility would make this process easier, and the more mana points and perception you have, the less tedious it will be (since you won't have to run off to rest as often). 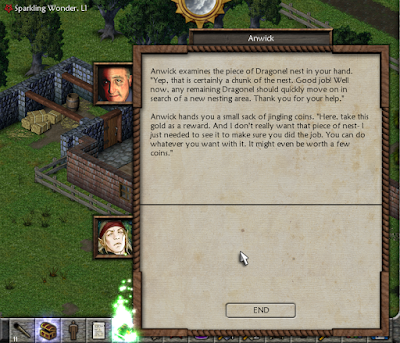 If you blow up the hive, you can then look inside it to take a chunk of it with you to take back to the Yoma River Valley and give to Anwick, who will reward you with 100 gold and 250 experience points. (He'll also let you keep the chunk of the dragonel hive, after he sees it as proof.)

Solving "A Letter From Wendy":
The house of Ruel (Wendy's brother) is in the woods in the northeastern part of this map. The outlanders also have a camp in the eastern part of the map at the edge of a crescent-shaped grove southeast of Ruel's house, which you can loot and then run away from if you're up for the run-around, or deal with more easily later with more spells or improved stealth skills. 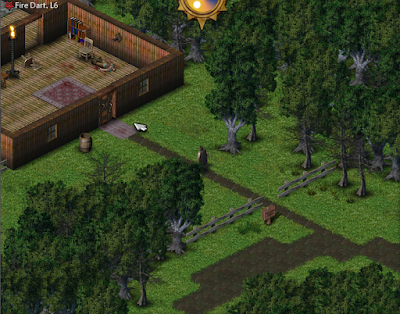 Inside Ruel's house you'll make the grim discovery of Ruel's body, and find Wendy's letter there too.
To solve Wendy's quest, you'll have to return to her house in Eastwillow and deliver the bad news about her brother's death, but you'll receive 300 xp for your efforts.

The Bronze Riddle & Secret Room
There is another dark but intriguing twist to this story, however: Inside Ruel's house in the rear room, you'll find an inactive teleportation pentacle with a plaque above it, inscribed with a riddle involving bronze. The way to solve it is to return and fully equip yourself with bronze gear (e.g. a bronze helmet, armor, gauntlets, leggings, and even bronze boots) and step onto the teleport. (Since merchant stock varies, you'll probably have to keep an eye out and come back here after checking quite a few blacksmith/armorer shops in various towns to find one of each type of bronze armor.) When you step onto the plate, it will teleport you into the interior chamber with no door, where you'll find two treasure chests, one of them containing several hundred gold coins and a book called "The Orakur: Of Fact & Fiction." 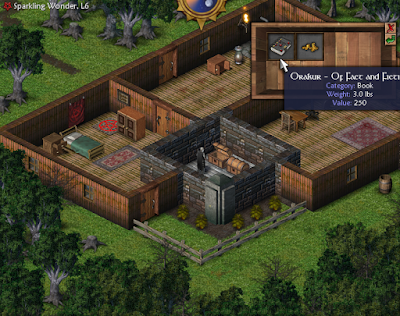 There are two things you can do with the book: One is to take it back to Wendy to show it to her, but this will result in her becoming hostile after telling you that "The One" does not want the book to exist. (Unfortunately, it seems Wendy is another one of "The One's" victims, like Julian lurking down the Old Covenant Well.) The only benefit of doing this is to find out that "The One" wants to repress information concerning the Orakur.
However, you can avoid Wendy's hostility altogether and instead just take the book all the way to Port Kuudad's Lockston Hall, where you can give it to Saint Gilhelm. Saint Gilhelm will then ask you to take the book to the desk of the Hall's mythology scholar, ultimately earning 1,250 experience points for this.
With access to the Halls, you'll also be able to find a belltree where you can hang four mysterious bells that you'll find in four of the most formidable "dungeons" in Eschalon Book II. However, you'll never have to kill anything to claim all four, and when you bring them all back to the belltree, you'll receive a huge reward of 30,000 experience points. (See the PORT KUUDAD section for other details.)

The Central Farrock Range & The Farrock Monolith
Since you'll have to travel back to the Southern Kessian Basin to return to Ruel's House to eventually solve the bronze riddle, it's probably a good idea to make a short trip to a monolith that will enable you to quick-travel back to a nearby place: To do this, head northeast a fairly short distance past the forest and travel north to the Central Farrock Range.
Only a short distance to the north on that map, you'll find the Farrock Monolith, a standing stone in front of the mountains and Farrock Caves, which you can examine to add it to your Quick Travel menu.

The Farrock Caves (South Entrance)
You don't have to brave the caves if you're not ready, but using the Monolith will also enable you to travel quickly back to the southern cave mouth. (See FARROCK CAVES for other details).
If you enter the caves, you'll find an electrical barrier that you can disarm by throwing an object (like a rock) through the barrier to hit the switch on the other side.
You can also open up a gate further north that can only be opened from the south side, but will let you get to the north entrance near Everdale (covered in a later section).
There is also an evil blacksmith named Jawbreaker with a lair in the caves, from whom you could choose to steal some treasure if you have enough stealth skills and spells to keep him at bay.)
There are several more options things you can also do on the southern side of the Farrock Range also, besides entering the caves:
If you were up for hauling a large number of powder kegs to this area, there is a secret chest you could find behind a blocked but easily visible rocky chasm along the central/western mountainside. Hauling 4-5 black powder kegs back here is a bit of a chore, but if you do it you'll be able to blow through the rocks to a chest with a stash of fifteen throwing weapons called "Doom Stars." 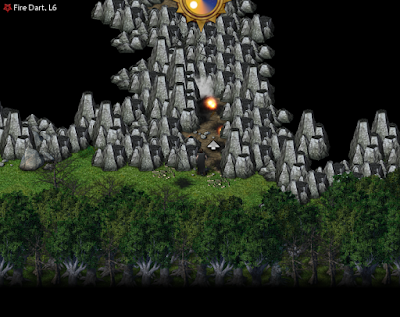 These Doom Stars probably don't have very practical pacifist run applications, but you can still sell them all to any blacksmith shop for some gold. (They're worth 50 gold each, so if you waited until your Mercantile skill was high enough to sell them for full value, they'd be worth around 750 gold.)

Also optionally, if you exited the map to the east of the Monolith, you'd find an abandoned house full of Outlanders, with several chests you could raid after using your choice of the usual pacifist run tactics of stealth, invisibility, haste, nonlethal spells, etc. (You'd also notice a river flowing out of the Farrock range here, but the only way we remember to get to the other side is by making a long trip through the Farrock Caves. See the other section on the FARROCK CAVES if you want to try it early.)