After you speak with Eleanise at Eastwillow Magicks and show her the strange viewing glass, you'll need to go to the western shores of Greenriven Lake to visit Eleanise' Uncle Minus, in order to complete the second chapter of "Destiny Through a Viewing Glass." (See the EASTWILLOW section for details about how the quest begins.)
To reach Greenriven Lake, take the road west out of the town of Eastwillow, and follow it as it winds through some woods and then turns southwest to cross the bridge of the Ironpool Dam. 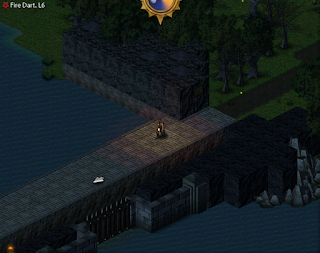 While crossing the dam, be prepared to take a few hits from projectile-spitting black slimes, since at least 1-2 of these creatures will probably be squelching around on top of the stone causeway that you'll have to cross to reach Greenriven. 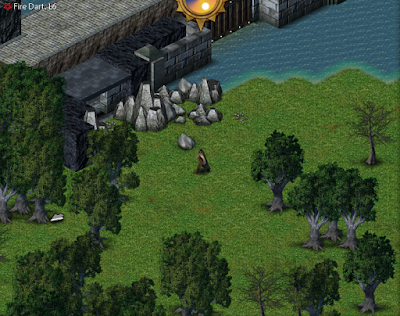 If you went inside the Ironpool Dam's lower entrance after crossing the bridge, you'd be able to meet the dwarf engineer Brudo inside. Brudo won't be too forthcoming with strangers, however, so you may want speak with Minus first.
After following the main road west along the lower lakeshore for a good stretch, the road will come to an end in the grass, but it's only a short distance northwest to find Minus' house on the edge of Greenriven Lake.
When you enter Minus' house, he'll be glad to talk with you about the viewing glass, and will recognize some of the glyph signs on it. He will suggest that you take the glass to Saint Gilhem at the Lockston Hall academy of mages in Port Kuudad, in order to learn more. This conversation will complete the 2nd part of the quest, which will now update to part 3, and you'll receive 500 experience points.
The Swamp Chest
There is another quest you can get right away by speaking with Minus (see "Secrets of the Deep" below), but before backtracking to the Dam: If you're feeling adventurous, there is also an old swamp chest hidden at the far northern end of this strand past Minus' house, on the edge of the lake where the ground becomes marshy. To raid the old chest without stealth or invisibility, though, you'll probably have to sustain a lot of damage from the black slimes infesting the swampy shores. 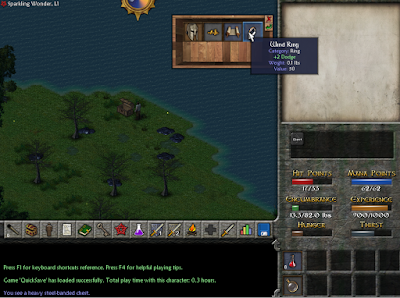 "Secrets of the Deep"
If you speak more with Minus after showing him the strange viewing glass, he'll tell you the eerie backstory of a lost mining town drowned in the depths of Greenriven Lake: Lost Westwillow. Apparently the town of Westwillow was once a prosperous riverside placer mining town, but was submerged in the floodwaters when the Ironpool dam was built (the result of an agreement between a dwarven king and a human chancellor). However, many of the angry villagers refused to leave, and perished when Westwillow was submerged beneath the rising waters that created the lake. Now the ghosts of those who perished are still angry and restless somewhere in the depths. Minus will suggest that if you want to learn more, you should speak with Brudo, the dwarf engineer inside the upper level of Ironpool who knows more about the hauntings than he may have let on if you spoke with him earlier. Minus will now tell you a dwarven blessing to help you earn Brudo's trust so that he'll tell you more about the haunting below the Ironpool dam: "Mahul-Zarim-Gamil."
At this point, you can return east by following the road, and then dropping down below the path to enter the interior level of the Dam just below the causeway. You can then speak with Brudo, ask him questions about the Dam, and be able to tell him the dwarven blessing "Mahul-Zarim-Gamil" so that he will tell you more, and also open the gates to the lower levels of the Ironpool Dam. Doing this will reward you with 300 experience points, and you'll now be able to enter the ominous lower levels and find the entrance to Lost Westwillow.
The lower levels of Ironpool Dam are probably not an ideal place take on until you're at a higher level, preferably with some types of stealth skills and spells, and ideally the "Turn Undead" spell.
(Whenever you're ready, however, see the separaate section on IRONPOOL DAM & LOST WESTWILLOW.)

Before you leave the Greenriven map, note that you can also find two more chests in the northeast: One by sneaking into the wooded camp of some hostile outlander thugs in the far northestern woods, and another directly west of that on the marsh lakeshore, where you'll have to evade a lot of slimes and some dragonels.

At this point, it's up to you where to go next, but our preferred route when planning to head to Port Kuudad from this point would be to head back over to the east side of the dam, and then head north of Greenriven to the Western Kessian Basin, then turn east from there to pass through Wolfenwood. This will bring you to the northern side of the Central Farrock Range, where you'll find the town of Everdale. There are sidequests on each map that you can pick up on the way, and you'll have several choices of how to get inside the guarded city walls of Port Kuudad after you reach the Central Farrock Range...