The Village of Everdale
If you've arrived from Wolfenwood, you'll find yourself still on the forested road a short distance from the village of Everdale on the north side of the Farrock Mountain Range. As you approach the town, you'll see the Wolf's Den Inn below the road, and can also examine the sign above it to add Everdale to your quick travel destinations.
The Wolf's Den Inn
This inn is in the woods beside the road on the western side of Everdale. If you talk to the owner, Travet, you'll have the option of buying and selling, and he'll also tell you that he has an ambition to build a bath house by renovating a ruin near a spring east of the village. However, a monstrous plant (a Sentinel Stalk) has taken root in the ruin and now attacks any one who comes near by spitting barbed projectiles. Travet will consequently offer to reward you if you get rid of the Sentinel Stalk, so that he can safely renovate the ruins. This will initiate the quest "A Weed in the Bath House."
If you're a strict pacifist challenger who will harm no living creature (fair or foul) and wants to avoid even indirect violence, you can skip this quest. (If not, one possible solution that also includes a lot of spoilers is described in the optional "Lycanthrope" subsection.)

Wolfsbane Magicks
Here you'll meet Harpen, the magick dealer who owns and runs the "Wolfsbane Magicks" shop down the road in the middle of the village. If you avoid raising the thorny issue of lycanthropy, you'll be able to deal with him as you would with any other magick dealer, selling him magical items or alchemical reagents, and buying from his varying stock of scrolls, potions, rings, amulets, and other wares. (If you want to consider stepping into pacifist challenge-run grey area, see the separate section on "The Lycanthrope.")
The Empty House & The Old Treasure Map
The building next door to the Hunter's Outfitter (just down from the well you can find up the north path in the woods) contains an empty building. No actual NPC seems to live there, but there is an old cryptic treasure map you can find inside, showing a route to a treasure box relative to several landmarks, including three short crags of rock and an old tree stump. To solve this mystery, see the section on the EASTERN FELLPINE FOREST.
Ara & "The Hunter's Outfitter"
The last building on the northeast edge of town is Ara's blacksmithing and outfitting shop. If you ask her if she has any work that needs to be done, she'll give you a quest called "Adamantium Ore Else," and ask you to go and look for a specimen of Adamantium ore in the Farrock Caves.
She says she found a good chunk of this ore herself, but was chased out of the caves by spiders and dropped the ore somewhere in the caverns while making her escape. This is a quest you can complete without any violence (though you'll have an easier time of it if you have stealth, haste, or plenty of mana to cast repulsing or entangling spells on the wolves and spiders you'll encounter on the way).
First you'll need to travel southeast past the Wolf's Den Inn and follow the paths to the entrance to the Farrock Caves. (You can reach the caves by entering the inn's front entrance by the main path, then exiting out the back door to reach this area.)
THE FARROCK CAVES
After you enter the caves, you'll find yourself in shadowy rock tunnels inhabited by spiders called Phase Hunters, who can be dangerous if they surround you, but can be evaded easily enough with stealth or haste, among other methods. You will notice a number of black powder kegs inside the caves along the walls (e.g. one on the western passage, and two more on the upper northeast passage), and will need at least one if you want to try to exit the caves in the east. 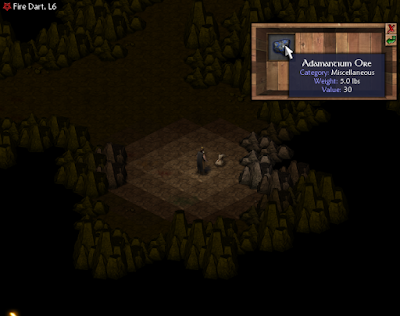 If you're on Ara's quest, you'll find the Adamantium Ore on the ground in a widened cavern on the east side of the caves. You'll probably have to give the spiders a run-around to avoid being surrounded and penned in, but they're also susceptible to Sparkling Wonder at a decent casting level. After you grab the chunk of ore, though, you can take it back to Ara at the Hunter's Outfitter for a nice reward of 200 gold and 750 experience points.

If you want to explore the caves further:

Hidden Gemstones
There are many gemstones hidden inside the rock walls of the Farrock Caves. If you have enough Perception and points in the "Spot Hidden" skill when you pass by the edges of the rock walls, you'll see a flash of light and be able to inspect the walls at that place to find large and small emeralds, rubies, and other gems.
If you don't want to invest skill points in Spot Hidden, there are also several rings you can buy at magick shops that will give you some points in Spot Hidden. The skill is passive and will be re-tested every turn automatically, so if you happen to have a map showing where to look for the gems, you can find them by passing a turn or walking back and forth nearby...)
The Eastern Caves & Exit to the Northern Farrock Range
If you travel all the way to the eastern side of the caves, you'll find a passageway turning sharply south where you can blow open a blocked tunnel to access the lower path of a sandy waterside area where an underground river flows out of the caves through the cave mouth leading to the Northern Farrock Range.
If you exit the caves here, you'll find the subterranean pools flow out into a river delta. There is a treasure chest on the island in the middle of the river, and by traveling northeast through the woods, you can exit north to find yourself on the wooded coastal area below Port Kuudad, where it's possible to travel northeast along the coast and find your way into the sewers. (This is one possible way to get inside the city without a Citizen Writ.) There is also one treasure chest hidden along the western edge of the wall surrounding Port Kuudad...


The Southern Caves & Exit to the Farrock Monolith
Nearer the western half of the caves there is a passage turning south, but it's blocked by a gate that needs to be opened from the southern side. If you want to go to this branch, you can enter the southern mouth of the caves by heading north from the Southern Kessian Basin (See SOUTHERN KESSIAN BASIN), and if you already visited, can quick-travel right to the entrance using the Farrock Monolith. 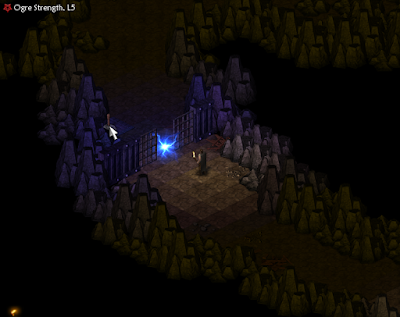 The southern half of the caves has an electrified gate (which you can open by throwing a rock or projectile at the lever from the south side) and the lair of a sinister foe named Jawbreaker the Blacksmith. Fortunately this individual is very slow on his feet, so it's easy enough to outrun him and optionally grab the contents of two treasure chests nearby (one inside his lair, another further on in the southern caves).
Entrance to Fathamurk: If you destroyed a barrel next to a blocked tunnel in the far western side of the caves (above Jawbreaker's lair, but below the locked gate dividing the north and south sections of the caves), you'd be able to use a black powder keg to blow away obstructions and find the entrance to a formidable dungeon called Fathamurk. 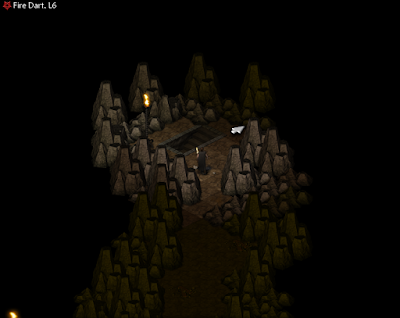 Warning: If you descend into Fathamurk out of curiosity, you will soon find a gateway slamming shut behind you and trapping you inside what's probably the hardest dungeon in the game, even for a fairly high level adventurer. (If we're not mistaken, this is also the one place in Book II that you won't be able to complete without having to dispatch at least a couple of entities: At least one "lava slag" creature, and a very tough golem who is probably the most challenging 'boss' character in the game.) Fathamurk is optional, however, so you won't ever be forced to enter it unless you want to take on a tough challenge.