The Western Kessian Basin
(One map north of Greenriven, and west of Wolfenwood)

Xed the Lycanthrope Hunter
If you arrive at the Western Kessian Basin by following the northern road up from the Greenriven area, you'll soon arrive a triangle-shaped junction in the road, and notice the camp of a somewhat wolfish-looking man named Xed. When you speak with him, Xed will inform you that he is a Lycanthrope Hunter on the trail of a dangerous lycanthrope who has already murdered a number of people in the area. 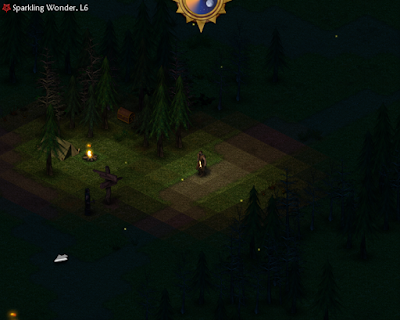 Xed says that he has been investigating the murders and finally managed to track down and identify the Lycanthrope as none other than a man named Harpen, who owns a magick shop in the town of Everdale (which you'll find in the Central Farrock Range after following the western road through and beyond Wolfenwood). 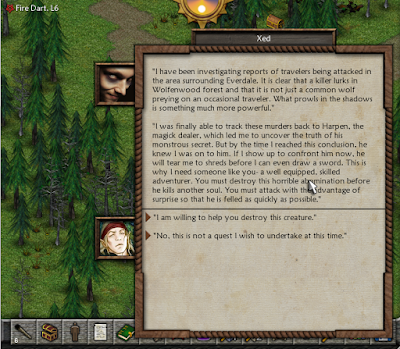 However, Xed says that it has now become difficult for him to get close enough to Harpen to strike at him himself, and he will offer to engage you to do it for him in exchange for 400 gold. He'll also suggest that you strike without even speaking to or confronting Harpen first, because he is supposedly very dangerous, and could kill you quickly if he anticipated the attack and transformed into lycanthrope form. If you agree to aid Xed, you'll receive the quest called "The Lycanthrope."
See details under EVERDALE to learn more.

The Churchyard Ruins
You'll find the ruins of an old stone church and adjoining cemetery a short way to the northwest of Xed's camp. The ruin is teeming with outlander thugs who will try to kill you, but even if you don't have stealth or spells like Sparkling Wonder, it's still possible to give them a runaround and get away with some treasure without anyone dying. To get the treasure: You'll find a grave monument in the cemetery  that will inform you that a priest named Father Beeman founded this temple in the 8th month of the year 717. (You might also find some armor in a coffin, depending on your scruples about grave-robbing.) 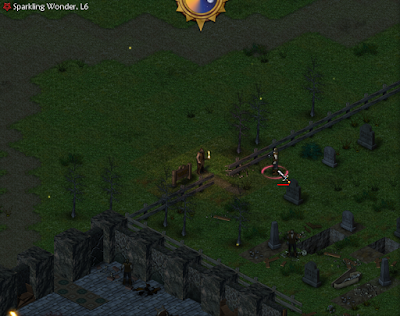 If you manage to either use stealth or get enough distance from the outlanders to get inside and examine the chest inside the ruin, you'll find a combination lock, and can combine the four numbers above "8717" to open the chest. This will reveal some gold and a bottle of vintage wine. (You might also keep this place in mind in case you require black powder kegs later on, since there are several of them sitting around inside the ruin.) 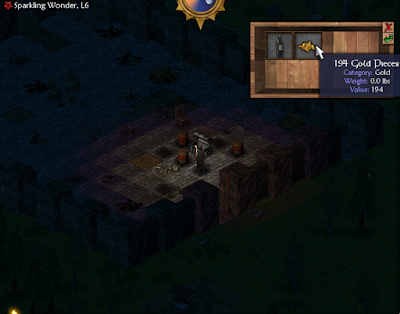 Brigand Camps
There are two more treasure chests at outlander camps on this map: One is along the road most of the way west, and another is in the opposite direction in a small clearing just above the western road toward Wolfenwood. You'll find the bodies of slain travelers who were attacked and killed by the outlanders. However, you can pretty easily grab the brigands' ill-gotten goods for yourself if you either use stealth, or cast a spell like Sparkling Wonder on the outlanders to keep them at a distance while you pick locks (or cast Lock Melt, if you're a mage). 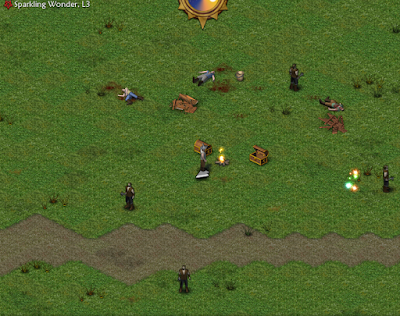 Otherwise, this map can take you either west toward the Yoma River Headwater if you follow the road through the plains, or north toward the Fellpine Forest, but if you're going to either Wolfenwood, Everdale (Central Farroack Range), or further on toward Port Kuudad, you will want to follow the road west to the edge of the forest of Wolfenwood.

The western road leading toward Everdale and the Central Farrock Range delves into a thick forest at this point, and you may hear the howls of wolves as soon as you approach. Wolfenwood is more dangerous to a lower-level pacifist challenger than prior areas, since the wolves here are faster and also less easily startled by the Sparkling Wonder spell  (which will sometimes work for a short time, but fail more often than it does on the outlanders and most other lower-level foes). 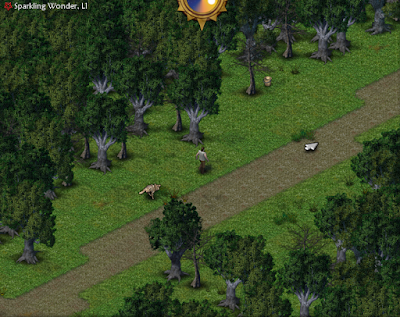 The Wounded Man
The first place of interest is the northern sidepath leading off the main road, which you can follow to find a badly injured young man who was attacked by wolves. It is too late to save him, but as he dies, he'll request that you aid him by taking his potion of Sparkling Divinity to the mother of a young boy who is deathly ill. You'll be able to complete the dying man's quest by taking the potion to the child's house in Port Kuudad and giving it to his mother, which will solve the quest called "To Save a Child's Life." (More details are under the PORT KUUDAD guide, but completing this quest can yield as much as 600xp depending on your dialogue choices when you deliver the potion.)

The Wolves' Grove
There is a fairly well concealed but visible side path leading into the woods again, this time on the south side of the road (a little way east of the north path leading to the dying man's resting place).
If you have the patience and/or pacifist run assets (like stealth, haste spells/potions, etc) to survive a trek through a wolf-infested winding path through the trees, you can find the corpse of another man slain by wolves, and  take a Port Kuudad Citizen Writ from the body. (You'll need to find at least one of these writs in order to get the city guards to allow you in the front gates, though there are other longer routes, like sneaking into the city via the sewer  entrances found along the eastern coast. See Port Kuudad for details.) If you want to head straight to Port Kuudad after getting through Wolfenwood and visiting Everdale, this is probably the most efficient time to pick one up though. 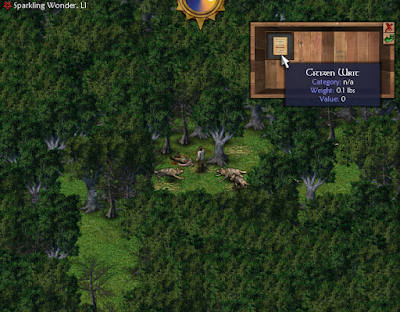 Unless you already have good stealth skills to stay hidden, this is a bit dangerous since the fast-moving wolves can more easily pen you in the narrow paths, and bite you as you try to run past. Drinking a haste potion might be helpful here, since it will let you move faster than the wolves to grab the Citizen Writ off the corpse, then flee to head back up to the main road leading east.

Hunter's Clearing & Foraging Training
As you walk through central Wolfenwood just after the road starts to bend gradually northeastward, you'll notice a bucket sitting alongside the trees (the same one shown in the first Wolfenwood screenshot). This marks the entrance to a hidden pathway through the forest, eventually leading to a clearing where some rangers practice their archery skills.
Here you'll meet a ranger named Hunter, who can train you in various archery skills, but also the powerful pacifist-friendly skill of Foraging: Foraging will enable your character to automatically gather valuable alchemical reagents every time you're camped. 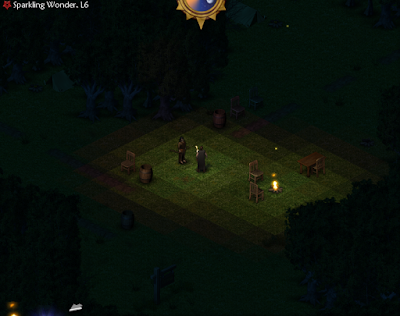 You might already have other uses in mind for your gold first (e.g. training in magick, alchemy, or other skills in Port Kuudad), but Foraging is arguably one of the more "overpowered" pacifist run assets available, if trained up to a high level: If you combined solid Foraging with the alchemy skill (which you can train up to level 8 in Port Kuudad), you can also use it to brew useful potions (haste, invisibility, ogre strength, nimbleness, healing elixirs and mana potions, etc) that can provide you with most of the best pacifist run assets available, even if you're playing a character with little or no magickal skill. (More details about why we liked Foraging are available in our SKILL section, and also the MERCANTILE section, since Foraging will enable you to earn a lot of gold.)

The Wolves' Den
If you're not having problems evading the many red wolves in the forest, you can follow another path leading south through the dense woods to find some interesting things and minor treasures: The turnoff is very near the turnoff to Hunter's clearing, but heading south instead of north. You'll find lots of wolves along the way, followed by a rocky den-like area with several more corpses, and can find some gold and other minor items. (You might also note possible signs of the rocky den area being scarred by fire.)

There is also one more chest you can also find in Wolfenwood in the far northern part of the forest, but as far as we know the only way to get to it would be to walk all the way back to the western edge of the forest and circle over from above, or else just return from one of the maps to the north later on instead. (The contents of most treasure chests in Eschalon are randomized to some degree, even if some are better than others, so whether it'd be worth the trip depends on your luck.) 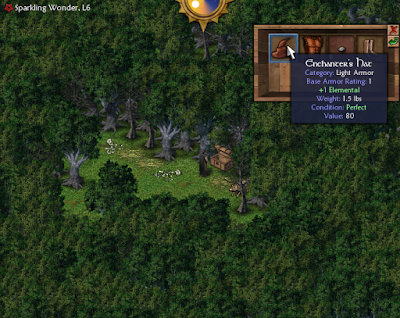 If you're on the way to Everdale, you'll reach it by following the main road all the way to the eastern edge of the map....