We already covered most of the most subquests that yield either non-violent experience point rewards, gold, or plot developments in other sections, but there are also some nice sights to see for players who enjoy exploring the mountains of northeast Thalmont:
Deladkull Glacier & The Snow Cave
This is a nice place for some horseback riding and sight-seeing, particularly if you have the Orc Camouflage armor on, as there are no inhabitants up here other than glacier orcs and wild beasts.
There aren't any quests on the glacier, but it's a scenic place where it snows regularly once you get to a high enough elevation. You'll be able to see wildlife such as wolves and polar bears,  as well as viewing rustic glacier orc villages. 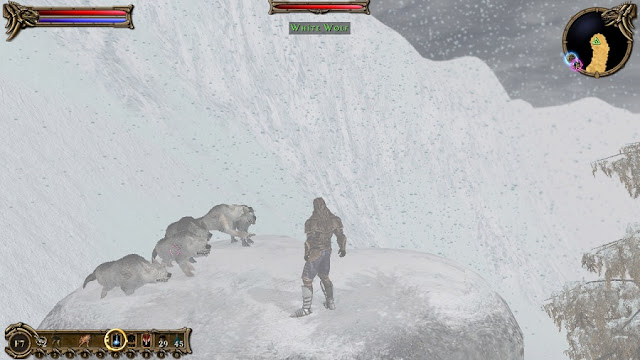 And if you're wearing the orc armor (see CATHALON section for details), your new friends the glacier orcs will allow to take any treasure you might happened to find while sight-seeing at their snow camps.
You can also visit an impressive cave (called Ganga Cave on the map) whose nondescript entrance is near the snowline. The interior of the cave, however, is a series of snow and ice-filled caverns with a series of icy pools, and one huge cavern where some glacier orcs have made a camp and cookfires on some ice islands in the middle of the pool.
There are also a lot of timber wolves and some polar bears in the cave who will bound up to try to attack you, but you can easily cast freezing wave to prevent them from chasing you onto the glacier orcs' turf and getting themselves killed while you peacfully tour the caves.
Elsewhere on the glacier we also encountered at least one giant stamping around near some huge granitic boulders, but it tried to kill the protagonist when we tried to talk to it, so we ran away.
Old Boar Cave
Old Boar Cave is an impressive looking cave east of Menno Heragerard's outpost, down the hill, and west of the outdoor Grom strongholds built into outdoor rock formations. (If you come down the hill from the outpost, you'll find it right behind a camp of human bandits who are lazing around  in the road, but are easy to sneak past after picking the lock to their treasure chest on the east side of the camp.) 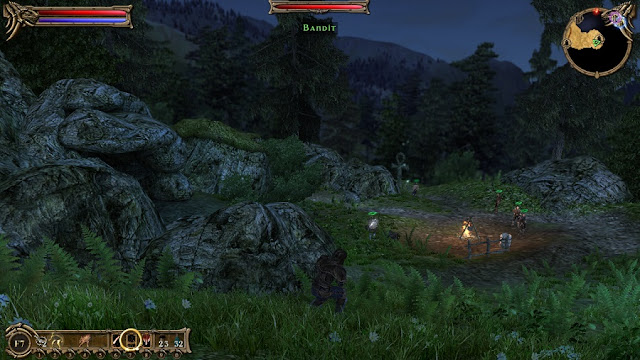 You can then sneak into the entrance to Old Boar Cave, which is another good place to test the mettle of your high-level sneaking skills: 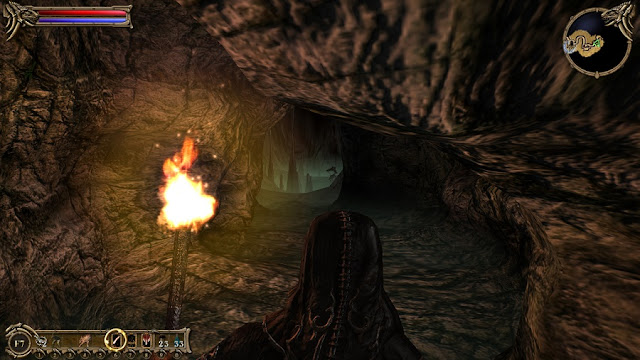 If you decide to take this on, you can sneak through some impressive caverns full of spiders, a cyclops guarding treasure chests, and find two huge caverns full of green mists and both stalagmites and stalactites.
The large caverns are loaded with Grom warriors and archers, a couple of dangerous Grom shamen, as well as more ogres. One theoretic way to get through this cave with ease is to only enter once you're wearing the Orc Camouflage armor (waiting for the right time since it can only be taken on and off once.) 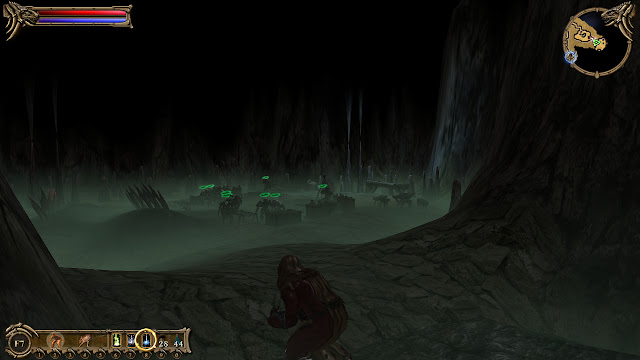 However, if you like stealth and are careful not to blow your cover, it's possible to use high-level sneaking skills to creep in and pick all the locked treasure boxes, and remove all their treasures for your own use without ever being seen. 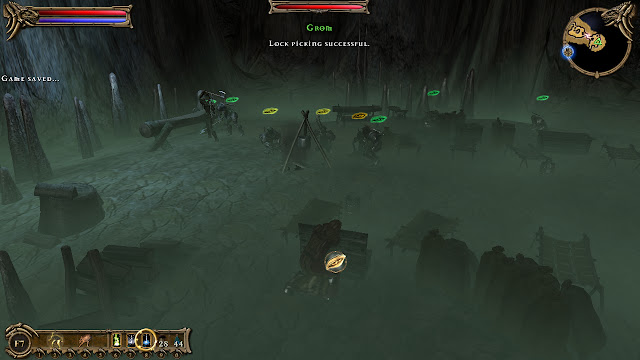 You'll then be able to sneak back out loaded down with a small fortune, and can use various herbs and potions that provide a temporary strength boost if you find yourself with more treasure than your pacifist-challenge hero can carry.

The Mysterious Grom Mining Cavern
There is another impressive Grom-inhabited cave elsewhere in Thalmont, which we call "mysterious" because we've forgotten which exact cave this actually was on the overworld map. However, those who like exploring and using the sneaking skill to do some stealthy sight-seeing can sneak into this cave and watch the Grom's hard at work mining with pick-axes.
You can also inspect some impressive crystalline formations growing on the rockfaces inside the caves. (Of course, in addition to sight-seeing you can also help yourself to Grom's treasures using the sneak and lockpick skills.)
A note on casual exploring with the Orc Camouflage Armor:
If you're already wearing the orc camouflage armor acquirable in Cathalon (which can only be taken on and off once), you could alternately just walk into these and other lairs of both Orcs and Groms and help yourself to the treasure without even doing any sneaking. 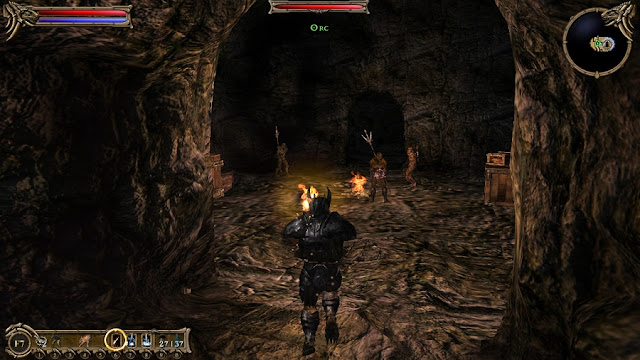 There are many more caves all over the map, some of which contain surprises like live magma cauldrons, or more pleasant environments like gleaming waterfalls or underground habitations. Nearly everyone found inside is hostile to human explorers, but you can visit a surprising number of caves and outdoor wilderness areas without being attacked as long as you're wearing the Orc camouflage armor during your exploring.
The Orc armor seems to work not only to win instant friends among all orcs and groms, but also Yatholen's serpent-people, and some other creatures who also give you a free pass to walk around on their turf as long as you look like an orc instead of a human...
The catch is that once you're wearing the Orc Camouflage armor, other humans (armored soliders in particular) will also mistake you for an orc and frequently attack you on sight, so it's best to wait until you're ready to spend some quality time with the Orc armor before putting it on for the first time. (See the Gor Grammar and Hadeborg Castle sections later for some notable examples of where wearing the orc armor can make life extremely easy for the pacifist run player of Two Worlds I.)
The Forgotten Village
More dubiously, there is also a strange place you can discover along the high mountain roads directly east of Silver Plate Cave and Darrut Gate, somewhat to the northwest of the Western Thalmont Node.
The trouble is, we're not sure if there's any way to visit the place without disaster befalling the inhabitants:
In the first place, the denizens of the village will be displeased that you discovered their village, and you'll meet an elder named Barkin who will tell you some dark local history concerning a sacred grove and ancient pacts.
This will initiate a quest called "Web of Fear." If you then visit the Old Fort just north of the teleport up the road, you'll find a giant stamping about the place, but if you return to the Forgotten Village afterward, you'll discover the place being ransacked by giants who will kill all the inhabitants in the village, ending the whole episode on a discordant note.
(There doesn't seem to be any further development after this grim event, so we just reloaded a recent save file to spare the villagers' lives and avoid the Forgotten Village. Theoretically, though, if you arrive with the level 15 Air Magic spell 'Resurrection', you could watch these bizarre events transpire and then go resurrect all the slain inhabitants of the Forgotten Village, who wouldn't have to worry anymore about the dire impending doom that threatens each time an outsider drops by their village...