This section covers three different optional but pacifist-run friendly subquests you can complete in the eastern mountain wilderness areas of Thalmont. 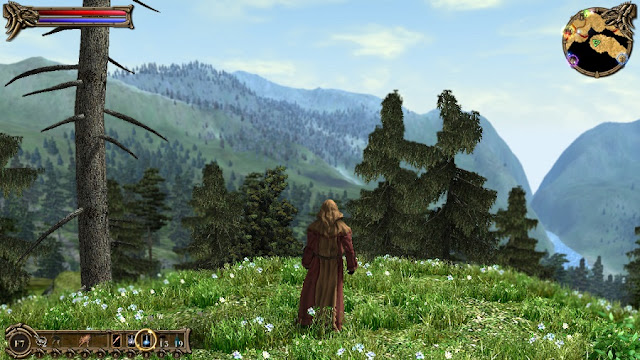 "Ruining the Groms' War For Them"
You'll find Skelden scout Menno Heragerard on top of the mountain northeast of the Excavations. If you've already spoken with Sanno Moon, this is one of the Skelden men you'll have been sent to help in order to gain reputation with the House. (See EXCAVATIONS guide for other details.)
Heragerard says the Groms are now invading in force and fears armies of them will soon attack settlements and the Excavations. 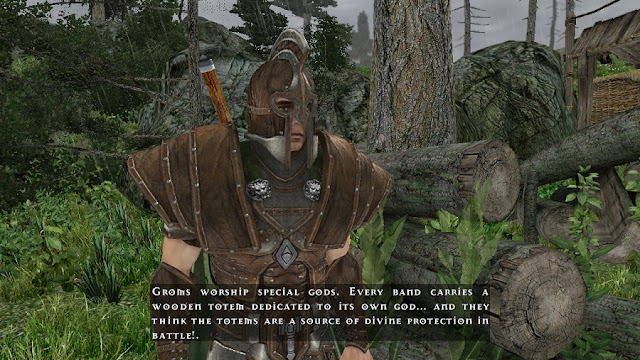 After talking with him for awhile, the protagonist will ask if the Grom war bands have any weaknesses. He'll remark that they have few, other than that they are all very superstitious. This gives him the idea that if their demonic horned-skull war totems were stolen from their sacred sacrificial mounds, then it would undermine their morale and confidence in their various war deities, and might be a substantial blow to their invasion plans. This initiates the quest "Ruining the Groms' War for Them."

What you'll have to do to solve this is to steal three Grom war totems from three of the four Grom war camps in the mountains, and bring them back to Heragerard. (You'll never be obliged to kill any Groms in the process.)
You can find these Grom camps in a number of places, such as the "Grom Siege" cave south of Komorin, the northwestern Grom war camp (where we also stole back Rama Erendar's stolen mage staff), and the outdoor Grom rock enclosure east of Heragerard's outpost. There is also a Grom war camp with another totem in the east, near Hagrast's camp and Conn Krannach's hidden lodge (see below).
As for the tactics:
We decided it would be fun to maximize our sneaking skill to level 10 (which we did by solving lots of violence-free side quests in Cathalon and Quidnar before returning north), and then use stealth to sneak in and steal the totems right out from under the Groms' noses without being spotted.
However, using stealth is optional, since it's also pretty easy to simply run into the camps, lead the Groms on a run-around if they cluster together to block your entry or exit routes, and do a quick snatch-and-grab raid to grab a total of three horned totems (though you can certainly steal more of them if you want to). 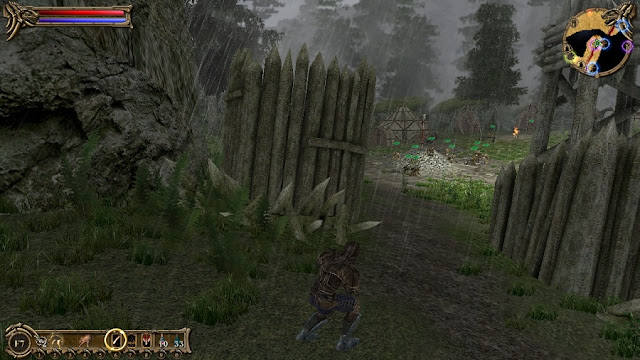 Of course, if you have either the freezing wave or earth chains spells, then it's even easier to just bind any hostile groms in place first, and just walk up and take the totems and magnestie (and any other treasures you find).
To solve the quest, you'll just need to take three horned totems back to Menno Heragerard at the outpost, and he'll be very impressed and reward you with gold, experience points, and more reputation with the House Skelden. 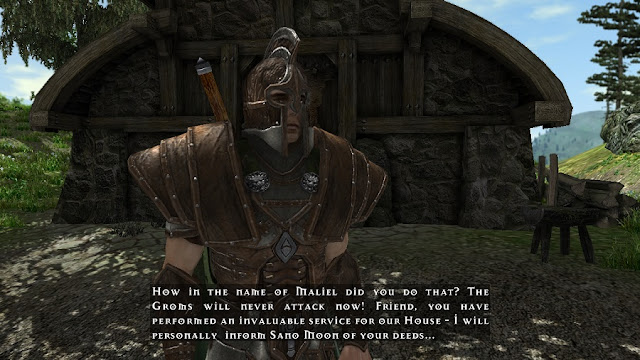 If you want to travel further east in the mountains, there are also several more nonviolent quests you can complete that will also give you higher reputation with the Clan Karga:

Hagrast Wisps's Camp, and the solution to the Missing Son sidequest:
Quite a ways east of the Excavations, you can find the notorious mercenary Hagrast's camp. Hagrast will tell you that he recently killed all his own men after they mutinied and tried to murder him, but he'll never become hostile to you unless you go out of your way to challenge him to a duel. 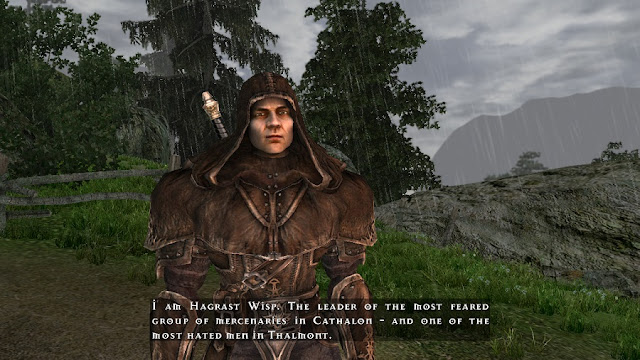 If you talked to Ged Sammra in Thabarkin, unfortunately you'll now learn that Ged's son Myron was killed here as part of the frontier drama Hagrast describes. (Delivering this bad news to Ged after returning to Thabarkin will reward you with increased reputation with the Karga clan for having tried to help him.)

Conn Krannach and the Idol of Throglin
Not far from Hagrast's Camp, you'll find a remote hunting lodge in the woods, which turns out to be the hideout of the Karga rebel Conn Krannach. The problem here is that you'll need some reputation with the guard to get inside to talk to Krannach, so it may be necessary to have already helped Eras Brakalet, Myron, and/or some of the Karga Fortress men like Barra, Ethan, etc before this. 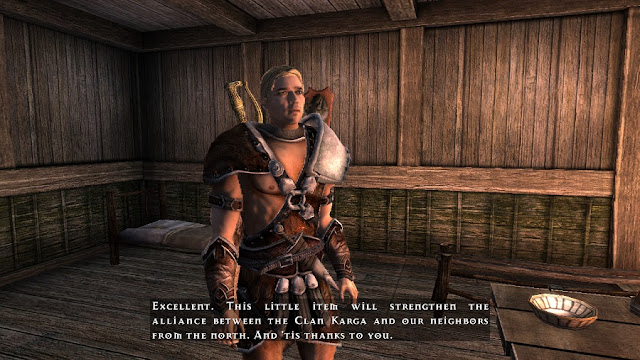 After you get inside the lodge to talk to Krannach, he will give you a quest called "A Friend's Favor" in which you have to sneak into a nearby dungeon and get an idol of the god Throglin. Returning this to Krannach will reward you with more experience, gold, and reputation with the Karga clan.

While this covers the pacifist run quests we found in the eastern mountains, there are also a lot of impressive sights to see out here, like the Deladkull Glacier in the far easter of the wolrd map, and some interesting caves and megaliths in Grom territory, which we covered in a separate section on the rest of the mountains of Thalmont...