Three noteworthy locations you can find while travelling in the far northern mountains east of the Komorin and Throglin Temple environs are the Rusty Ogre Lodge, the Orna Mines, and the Brotherhood Outpost. 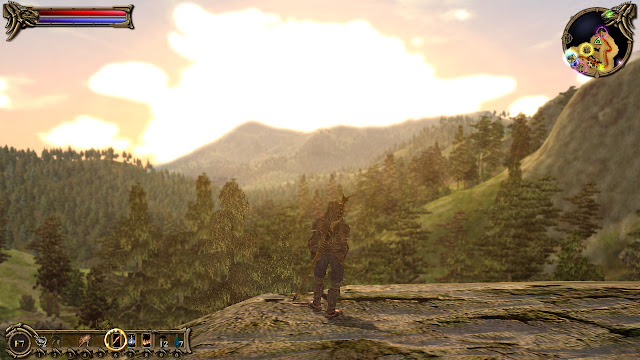 You can acquire a significant number of pacifist-run quests here that you can solve for a lot of xp, gold, skill points, and reputation with the Brotherhood and Mage Society, among other rewards.

The Rusty Ogre Lodge is full of Brotherhood warriors, and can be found by the junction in the road south of the Orna Mine, which has been taken over by hostile Dwarves. 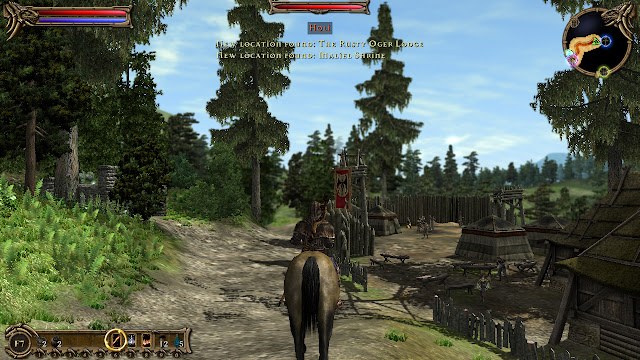 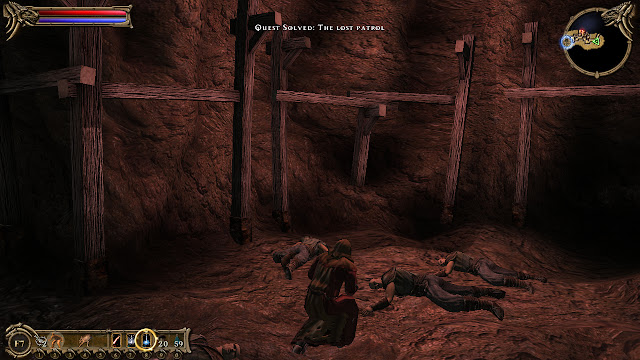 You can do these quests without any violence (perhaps most easily if you have strong sneaking skill before sneaking into and through the mines), but unfortunately you will find out that the brother was slain by the dwarves, along with the whole rest of the patrol. Later, when you return to give Holi the bad news, he will be grieved but still thank you and reward you for your help, which will also increase your reputation with the Brotherhood.
Alfron Dekar
Before heading to the Orna mines, you may also wish to speak with outpost commander Alfron Dekar, whose quest is decidedly in a moral "grey area" in pacifist run terms:
Dekar is adamantly determined to strike back against the dwarves who have invaded the mine and taken it over, and now hang any human they find near the territory which they've usurped. 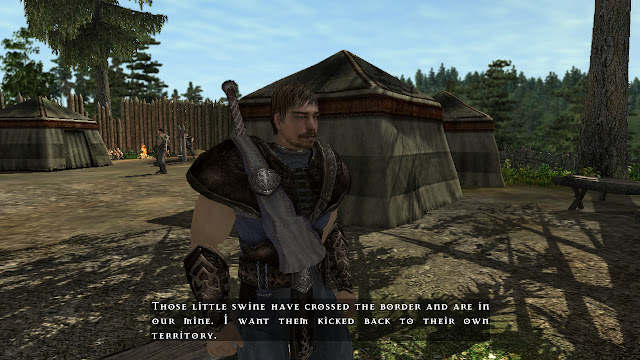 Dekar hates dwarves (who he calls "little swine") and wants to raise a force to attack them, but first he is keen to engage a mercenary to go and kill their commander inside the mines.
As far as we know, there is no way to deal with this without causing the death of at least the Dwarf Commander. We didn't try this in our run in order to stick to our "minimum violence" scruples, but another contributor also noticed the following: After trying to pick the Dwarf Commander's pocket in Sneak Mode and being attacked, the hostile dwarves chased him into a cavern deeper in the mines containing a cyclops... 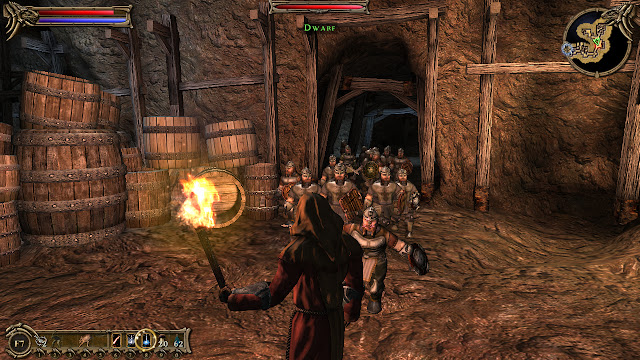 This resulted in an imbroglio between the cyclops and trespassing dwarfs, in which the dwarf commander was slain by the cyclops. (The player then ran out of the mines and confirmed that this triggers the quest reward from Dekar— though he also decided to reload an older save file to avoid causing the deaths.)
Note: You can still go find out about Holi's brother and complete his quest without ever having to cause any violence to occur between NPCs as part of Dekar's quest (provided you don't let any pursuing dwarfs chase you into the cyclops' cavern at the back of the mines). If your sneaking skill is high enough, you can get in and out of the mines without ever being seen by a hostile dwarf.

Savras Ram: Forgotten Lore
You'll also meet a troubled man named Savras Ram at the Rusty Ogre Lodge. Savras Ram was once a farmer, but he had a burning ambition to become a mercenary, and left his father's farm to come to the north to start a new life. There he encountered the notorious tough mercenary  commander Hagrast and his men, and summoned the courage to ask to join them. Hagrast gave him a test by giving him the ancient key to Throglin Temple's interior gates, where a haunted Dwarven Vortex is emanating strange and possible dangerous enemies, saying that if Ram used this key, he'd let him join his band.
However, Ram found he was too frightened of the dangerous supernatural energies to use the key, and is now ashamed and disappointed in himself.
He will consequently ask you to take the key instead, which will trigger the quest "Forgotten Lore." You can solve this quest by accepting the key and returning to the ancient Throglin Temple (i.e., the temple where the game begins with you locked inside of it).
The ancient key opens the gates leading to the swirling vortex of eldritch luminous energy at the rear of the temple: Climbing onto the platform and standing amidst the vortex not only won't harm you, however, it will reward you with 5 skill points that you can allocate to whichever skills you want.
There is a danger here, however: Opening the vortex will cause a host of angry Dwarven ghosts to appear on the platform below you and attack if you jump down and let them get close to you.
However, like virtually every other foe in the game except for a handful of bosses, all these shades are susceptible to Freezing Wave spells that will hold them immobilized for much longer than you'd need to escape— and you could easily also just jump off the platform and run past them to escape the haunted temple with little difficulty.
(The only remaining caveat is that if you want to come back to the Temple to resurrect the two Groms the game forces you to bump off at the very beginning of the game in order to unlock the temple, these Dwarf vortex ghosts now shambling around the temple will also be hostile to the resurrected Groms and smite them in a few blows— so the most scrupulous players may end up losing some sleep over the moral issue of whether to resurrect the two killer Groms in the first place, whether to banish the hostile dwarf ghosts to protect the resurrected Groms, or whether to forgo the quest rewards altogether to hold to a creed of purist non-involvement.)

Further up the road past the Rusty Ogre Lodge, you'll find a Brotherhood fort and barracks, and on the crag above the fort, an imposing "Brotherhood Outpost" complex built from stone. First, however, you can meet another interesting character along the road:
Giriza Smuggler Tidar Shog & The 'Slimy' Commander
While travelling toward the fort on the lower mountain roads, you'll find a small camp in a clearing on the left, where you'll meet a smuggler named Tidar Shog. 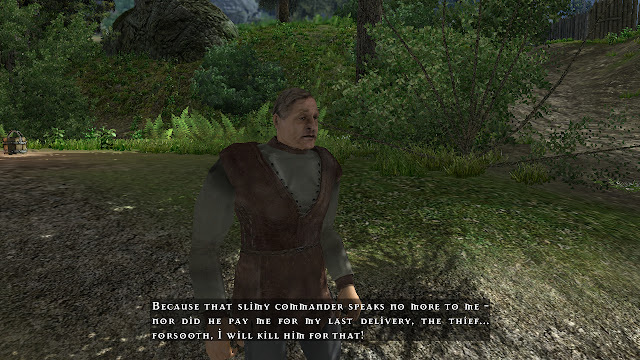 Shog is personable enough toward the protagonist, but he is fixated on getting revenge on the the Brotherhood commander Darat Honmoria (who can be found at the Rusty Ogre Lodge), and offers you 1000 gold to go and kill him: It would seem the Commander stiffed Tidar Shog for some gold after Shog smuggled dragon's eggs into the Outpost for him, and Shog wants revenge.
As far as we know there is no way to satisfy Shog without killing the commander, so we didn't attempt it. However, by accepting the quest from Shog, you'll have the option to go talk to the Outpost Commander and get 1,000 gold from him without having to harm either of the two feuding miscreants. (See below for details.)
If you talk to the Brotherhood soldiers at the barracks fort a short distance ahead of the Rusty Ogre Lodge, you'll find out no one else likes the "slimy" Commander either, but he's no longer at the Outpost or the Fort, having apparently teleported himself away after a disaster occurred at the Outpost...
Although you can't actually solve Shog's quest on a pacifist run, you can still pick up some extra gold by finding and speaking with the notorious outpost commander Darat Honmoria, who you'll actually find back at the Rusty Ogre Lodge: Honmoria will immediately start protesting and guess that Tidar Shog sent you to kill him, and offer you twice the reward to double-cross Shog and go murder him instead. The good news: The Commander will advance you 1,000 gold coins up front as a gesture of "good faith" for these black deeds, so you can choose pocket this gold and let the matter rest there, leaving both miscreants alive. (Note: These two quests are called "A Paid Murder" and "A Cross Hit", but you won't ever be under any pressure to do either in order to collect the gold.)

The Brotherhood Barracks
After bribing the surly gate guard Orm Munhin with 100 gold pieces to let you inside, you'll be able to meet a soldier named Eskel Oldroot near the other gate on the far side, and he'll stop you and ask for help finding his brother. This triggers the quest "Check Up on the Guard's Brother." 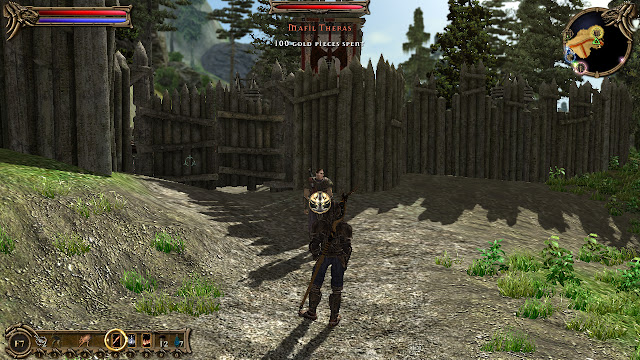 Past the fortress as you ascend the steeper roads and pass through a cave tunnel, you'll encounter a strange character named Ilon Kircer, who will advise you to run away from the Outpost, claiming that "Hell is up there," and that the Brotherhood and some mages were apparently performing secret and dangerous experiments involving both dragons and necromancy... These caused both men and dragons to start screaming and drop dead of no natural cause, and he says he only managed to escape by sheer luck after fleeing for his life. He'll also tell you that Loth Oldroot was on guard duty at the outpost when "Hell happened there," and then will leave. (If you try to talk to him again later, he'll just tell you to leave him alone.) 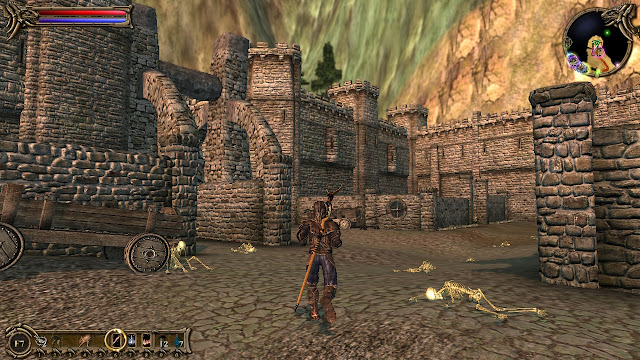 The Doomed Brotherhood Outpost
As you approach the fortress, you'll encounter a paladin named Toten Lokan who is there to investigate dangerous discharge of magical energy, which they suspect may have been caused by necromancers. (He will tell you to leave the area, but fortunately he won't become hostile if you just ignore his command to leave, however.) 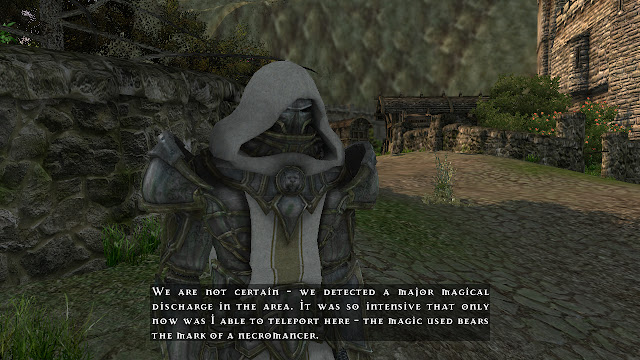 As the paladins suspected, necromancy is afoot and it's only a matter of time before you encounter hostile undead skeletons in this area, but they are pretty easy to sneak or run past without much difficulty.

The Dragon Scale
While you're still outside, this is an ideal place to pick up a dragon scale near one of the impressive looking dragon skeletons you will discover in some of the walled stone alcoves  on the upper outdoor leels of the Outpost. (You'll need one of these to give to Daron Moreti in Thabarkin's Mage quarter, in order to solve his quest without having to harm any dragons yourself. See THABARKIN)
You will also find an entrance to the Outpost Dungeons:
Enter these, and you'll be able to sneak in and find that one man still remains alive locked inside the rusty cages of the underground jail. The prisoner is a Brotherhood man named Ton Nakiri, who tells you that the much-loathed Commander had him thrown in jail for defying his orders, and that the Commander teleported himself away to the Rusty Ogre Lodge as soon as hell broke loose at his Outpost when necromantic experiments with the dragons went badly awry. Unfortunately, you'll also learn that Loth Oldroot died in the same attack, and his body is in the same jail cell. 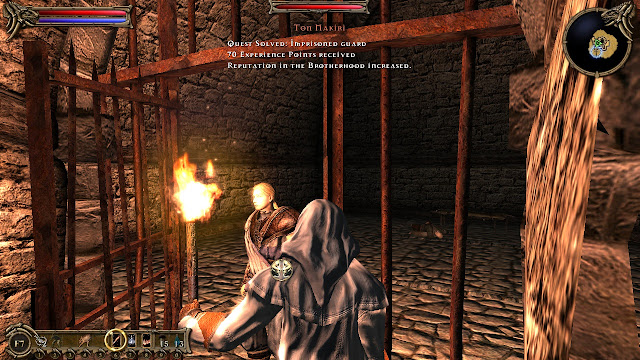 Now Ton Nakiri just wants a lockpick to let himself out of his cell, so talk to him again to give him one, and he'll walk out of his cell and reward you with experience and increased reputation with the Brotherhood.
Finally, you'll have to sneak or run past more skeletons to escape from the Outpost, after which you can descend from the mountains and deliver the sad news about Loth Oldroot to his brother, who will curse the Commander, but reward you with more experience points and increased reputation with the Brotherhood for your efforts.