This section covers both the map east of Candlekeep along "The Way of the Lion" (the road leading roughly east/northeast), and the crossroads further east where the Way of the Lion joins the "Coast Way" leading north and south.
After you left Candlekeep, you'll have seen a cut-scene in which your player character's ward Gorion was attacked by a sinister enemy and several henchmen, most of whom Gorion slew with magic, before himself being slain by their leader, whose name is Sarevok. (Here your player character is scripted to flee from the scene regardless of whether you're doing a pacifist run, so unfortunately there isn't any way to save Gorion.) 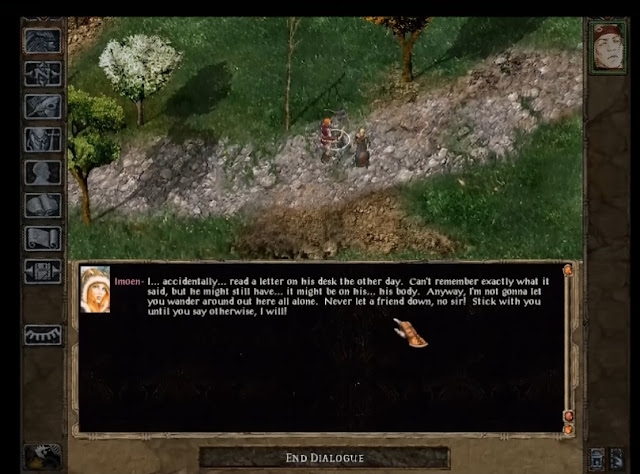 You'll start out along the road on the southern side of the map, and almost immediately will see your player character's friend Imoen rush up and tell you she is sorry, and wants to join you. (You'll have the option of asking any NPC ally to temporarily leave later on, but we found that pairing a mage and a thief as a team had the best results, so Imoen can be a good choice if your main character is a mage.)
As for the dangers: If you want to avoid combat on this map, you'll either have to spend some time actively running away from gibberlings and other creatures (which is not very difficult), or else use some stealth or spell-casting assets if you have a mage and/or thief.
If you happen to be playing a version of the game that lets you cast Invisibility 10' with a Fairy Dragon familiar, you'll have an easy advantage— at least until you try to have one character pick up some items (which will remove the invisibility). But if you don't have a fairy dragon, you can either rely on stealth, simple running away (which should work pretty easily), or start to experiment with nonviolent spells like Sleep, Charm, or Color Spray.
One other pacifist run note applying to the whole game: If you're bringing any NPC allies with you, make sure to turn "Party AI" off with the buttons on the lower right, because if those are left on the game will usually default to a script causing your allies to automatically start attacking any foe. (If not turned off, this could even accidentally kill fairly harmless innocents who just get annoyed with you occasionally— such as someone your rabbit tried to pickpocket, or an NPC like Mellicamp the Chicken, if you happened annoy him later in the game.) 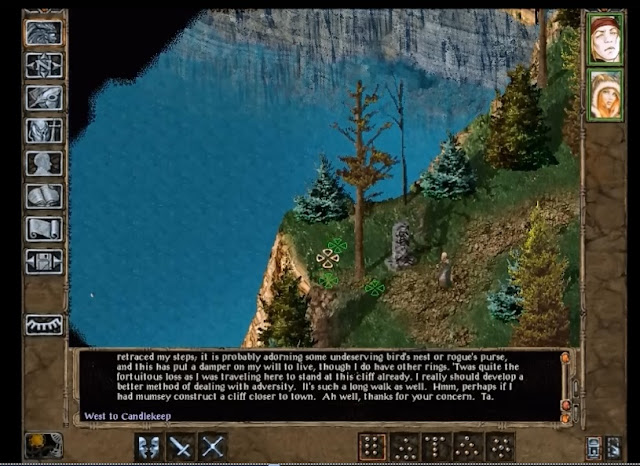 There are a number of optional things you can do on this map:

If you head a little way east and a longer stretch northward (where it's possible to slip between wolves in the west and gibberlings in the east), you can return to where Gorion battled Sarevok and his minions, and find some gold and treasures, along with a letter from the wizard Elminster among Gorion's items. 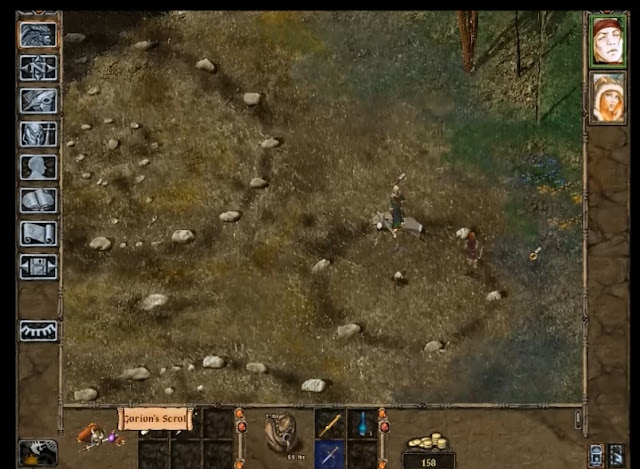 If you backtracked and followed the western sea cliffs down (or up, if coming from the bottom of the map) to the middle area, you can find a nobleman named Chase. (Watch out for several bears you may run into on the way, though they were easy to avoid.) Chase claims he's going to jump into the sea, but he'll cheer up very quickly if you talk to him. He'll divulge that he dropped a diamond from one of his rings, but as far as we know there's no way to find it and then give it back to him...
You can find the diamond further ahead inside a tree beside the road at the coordinates X:4418, Y:1956, but since there doesn't seem to be a way to give it back to Chase, you can keep it and choose to sell it later for around 500 gold.
One note: Baldur's Gate is not like many RPGs in which most or all friendly or neutral NPCs will attack monsters (which only happens occasionally in a minority of cases, like with the guards at the Friendly Arms Inn). This can lead to some surreal situations in which relaxed talkative NPCs ignore large groups of foes/monsters chasing you as though they weren't even there, but helps avoid sad situations like accidentally having NPCs like town guards slay some wild animals that were chasing you. (You also shouldn't have to worry about Chase being killed by bears, if one happened to follow you at this point.)
As for other encounters on the map:
If you either just followed the road east (or returned to it later) you can meet a friendly merchant named Kolssed who lost his business in Nashkel after troubles at the iron mines and the ride of banditry in the region.
Further ahead you'll meet a pair of dubious characters named Xzar and Montaron (both evil alignment) who will offer you a healing potion and then try to make you feel obliged to join them on a trip to Nashkel to try to claim a bounty in Nashkel. (We gave them the miss for various reasons, but if you want to you can let them join you as NPC allies.)
Past this, the road will wind a little on the way north, and you'll find some trees on either side near the end where you can spot the tiny hiding place of the hidden diamond midway up the trunk on the left side.
Holding down the Tab key will usually make hidden caches like this visible with a blue outline if you're having trouble finding it.
Finally, there is a messenger named Binkos who says he's going to warn Baldur's Gate about banditry.

The main road exits the map in the east.

If you came from the main road in the west, you'll still be on the road called the Way of the Lion, but will find it soon joins the north/south "Coast Way."
You'll meet the famous Wizard Elminster here, who will have one of many conversations with you about Gorion, your quest, and your future.
The Friendly Arms Inn is north up the coast way (on the next map), and if you continued heading south you'd eventually reach Beregost.

Hidden Treasure
If you head directly northeast of your starting position by going off the path, you'll have to avoid some Xvarts (hostile goblin-sized blue humanoids), but they're easy to deal with either with nonviolent spells like Sleep or Color Spray, or just by running away.
There is a small clearing with a large stone in it, and if you search the middle of the rock (X:1006, Y:1114), you can find a Ring of Protection that is a nice thing to have to increase your own defense, as well as being worth some gold. (If you started as a thief with decent stealth, you may be able to do this without even being spotted, especially at night.)
If you want to head to the Friendly Arms Inn and follow our optional path, there probably isn't much advantage to exploring the southern or eastern portions of the map yet, other than to be chased by various foes— but you'll return later on the way to Beregost, unless you choose your own nonlinear course.
If you do explore this map and head to the north following the road, you'll meet a ranger named Aoln who will tell you the area is dangerous (among other things).
The Ogre: If you headed through the dried ground and the evergreens to the southeast , you'll find a large ogre who robs travellers. He is involved in a quest you can get from the Friendly Arms Inn to recover a stolen girdle (though we're not aware of any way to solve it without killing the ogre, since ogres  appear to be immune to the Charm spell and this one starts out hostile, making it impossible to pickpocket him).
If you headed even further south, you could find a morbid ruin of a caravan with some bodies and a few gold pieces in a nearby container. Nearby there is a young boy who will be rude to you, and also another messenger from whom you can learn there is likely going to be a war between Baldur's Gate and the southern city of Amn.

For our purposes, we first headed north to the Friendly Arms Inn, for reasons explained in the next section...