The Friendly Arms is well guarded, but there are still a number of dangers you will encounter: Hobgoblins in the north, lurking in along the roads, and another danger waiting near the entrance to the keep (to be discussed shortly).
If you arrived by following the Coast Way from the south, you'll start a short distance from the gates of the fortress-like Friendly Arms Inn, where Gorion suggested you meet his old friends Khallid and Jaheira.
Hidden Treasure: Ring of Wizardry
If you veer off directly east into the woods, you can find a large pine tree containing a hidden cache near the bottom at X:2555, Y:3759. The secret treasure in the tree is a Ring of Wizardry: This is an extremely useful treasure for a pacifist challenge run, because you'll now be able to memorize and cast twice as many 1st-level spells when your mage puts the ring on.
If you chose a specialist mage such as an Enchanter, you'll be able to cast even more extra spells, since specialists can memorize more spells in their chosen school of magic. (Or If you're sure you won't want to ever use a mage even as an NPC ally, you could also sell the ring for thousands of gold pieces at a shop, and put it toward other highly valuable pacifist run treasures you'll find later, like shadow armor and invisibility potions.) 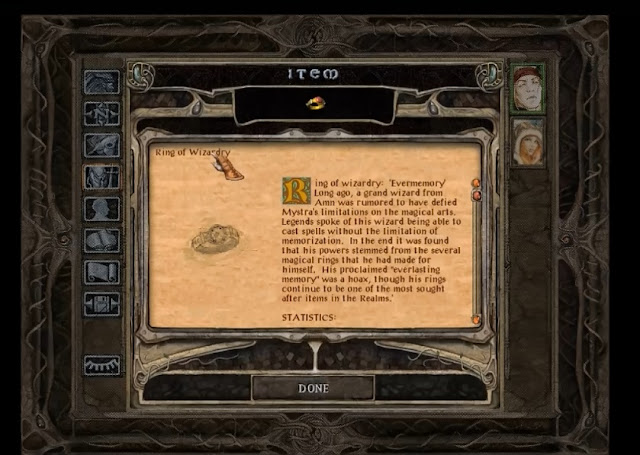 As for the background story about this lost magic ring: If you speak with one of the noblemen lodging in the upper floors of the Inn, you'll learn that a wizard was wandering around asking after a lost ring, but we don't know of any way to find this wizard to give the ring back to him, so you'll get to keep it.
Inside the Walls of the Friendly Arms Inn
You can safely go inside the walls main gateway of the Friendly Arms' outer castle-like walls, as long as you don't go too near the entrance yet, where there is a hostile NPC waiting. There is also a quest you can get here and win on a pacifist run, if you have a mage and a thief (or familiar animal like a ferret that can pick pockets):
Joia's Flamedance Ring
There is a house just to the upper left of the entrance where you'll find a woman named Joia, who will tell you that some hobgoblin bandits stole her Flamedance Ring.
If you have both a thief with some pickpocketing skill and a mage with the Charm spell, you'll be able to get it back from them without any violence: To do that, you'll have to go back outside the gates and head north.
There are some hobgoblins along the road, but you can probably avoid them easily by staying close to the western wall of the inn (and if you have a thief, being close to the wall will give you more of an advantage when hiding in the shadows).
The hobgoblins who stole Joia's Flamedance Ring are a short distance north of the central citadel of the inn.
If you cast Charm on the one with the ring, you can then order him to move up into the woods and have your thief/rogue pickpocket the charmed Hobgoblin bandit repeatedly until the pickpocketing succeeds in stealing back the Flamedance Ring.
You can keep repeating your attempts to pick the hobgoblin's thief's pocket as long as the Charm spell doesn't wear off. (You'll be able to pause during the process to save time if you need to, and can check your inventory to make sure the ring is in your thief's pack before leaving.)
You can optionally cast Sleep or Color Spray on the other hobgoblins so they won't bother you or attack their charmed friend immediately, and then just Charm the one with the ring to pickpocket him.
(Also, note that charmed foes will start battling their cohorts to the death if you let them, so the most peaceful way to deal with this is to send the Charmed hobgoblin lumbering off safely into the woods away from the others. After the Charm spell wears off of the hobgoblin you cast it on in a few moments, the others won't try to attack him anymore.)
When you return the Flamedance Ring to Joia, she will thank you and you'll receive around 400 xp (which is a very worthwhile reward while you're still at a low level).

The Inner Walls of Candlekeep
The only other major things to note inside the walls besides scenery is the Temple of Wisdom run by Gellana Mirroshade east of the Inn's main keep, and the main entrance to the Inn, up the stairs just left of the temple.
The Assassin Tarnesh
If you approach the entrance to the Inn, you'll be confronted by a man in a black mage robe who pretends to be friendly, but is actually an assassin holding a recently raised bounty contract on your player-character's head.
If you let him confront you he'll cast Mirrored Image and several dangerous spells like Horror, which (if effective) can cause your characters to run around in a panic with no control, after which Tarnesh might kill them with Magic Missile spells— even though the Friendly Arms guards will also promptly rush up to attack him for his crimes. After Tarnesh becomes hostile the Friendly Arms guards will deal out frontier justice and smite him, having warned all travelers that crime and violence are not allowed at the Inn.
However, if you want to stop all those events from happening, you can use either stealth or invisibility to get past Tarnesh without him ever seeing you, or give Tarnesh a runaround without ever actually letting him talk to you, so you can lead him away from the entrance and then circle back yourself:
As soon as Tarnesh sees your character from a distance he'll start walking forward to try to begin his dialogue. However, Tarnesh won't ever attack unless he's able to start his dialogue first. So we led him on a chase counterclockwise around the Temple of Wisdom, without letting him get close enough to ever actually start talking.
We then had Imoen (who was hiding along the west wall so Tarnesh wouldn't try to talk to her either) and our fleeing halfling converge at the entrance and run up the front steps into the Inn, with Tarnesh trailing behind.
(The pacifist run trick of not letting a character talk to you first and then become hostile afterward can be very effective on a lot of other enemies in Baldur's Gate later on as well.)
Tarnesh won't come inside the Inn after you, but he'll still be waiting outside at the entrance, so you'll have to do this each time you enter and leave the Inn.

Inside the Friendly Arms Inn: Ground Floor
You'll find a number of people you can talk to inside the tavern room of the Inn to learn some things about the Mirrorshades who run the Inn, the Inn's history, and the region in general:
Bentley Mirrorshade the Innnkeeper is a gnome who runs the Inn and also buys and sells various goods. You can rent a room if you need to replenish or learn new spells.
You'll learn that there is currently an ongoing iron crisis caused by ore from the Nashkel mines being mysteriously contaminated. You'll also learn that bandits have been plaguing the trade roads to steal all the good iron they can get, motivated by the high price of iron wares in the shortage. 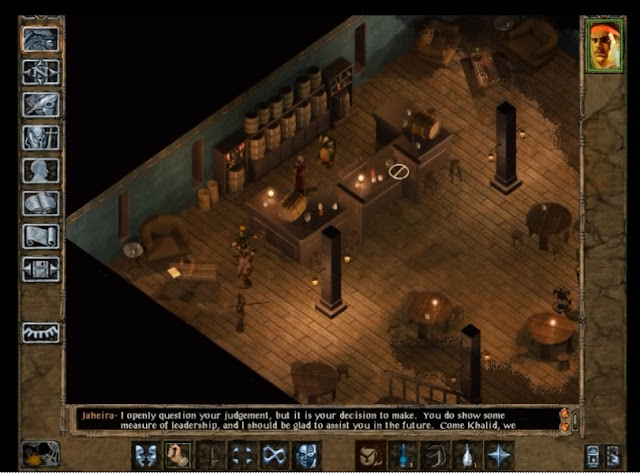 Khalid and Jaheira:
You'll meet the two allies Gorion told you to seek out in the western side of the room off to a corner. Khalid will be friendly, while Jaheira is more skeptical, but both are trustworthy allies that you could choose to recruit. (Jaheira is a druid who can cast healing spells, and might be useful for a lot of other reasons, but we opted to stick with a paired mage/enchanted and thief for the most part.)
If you take them with you, they'll occasionally try to urge you to hurry up and head for Nashkel immediately, but you won't be forced to go there until you're ready.

The Friendly Arms Inn: Second Floor
There are some more amusing people to talk to in the  Inn, but only one on this floor who will offer you a quest: Unshey, a dwarf who is irate after "an ogre with a Girdle fetish" attacked him on the Coast Way and stole his Girdle of Piercing. He'll offer you a reward if you return it. 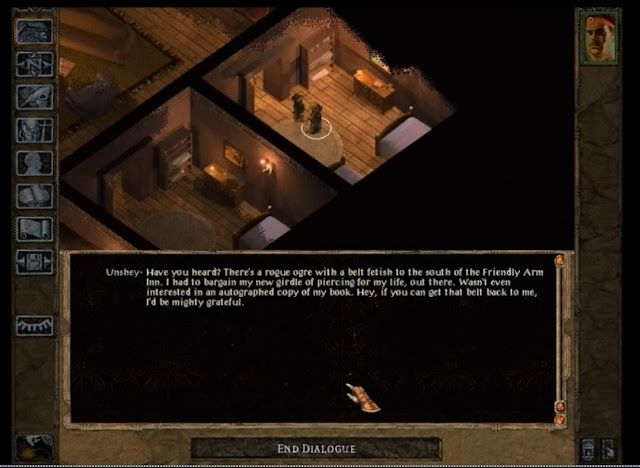 The ogre you'd need to get this back from is the same one on the east side of the crossroads map south of the Inn (see previous section), but unfortunately ogres seem to be immune to Charm spells, so we don't know any purely nonviolent way to get it back from him: Unless the later re-released editions altered the engine, it is not possible to pickpocket hostile creatures even if they're knocked completely unconscious by spells like Sleep or Color Spray.
If you got the girdle back with a rougher "indirect" method like charming nearby creatures to dispatch the ogre for you, you'd be able to take several girdles (one being a cursed "Girdle of Gender"), and return the Girdle of Piercing to Unshey for some gold, a copy of his latest historical book, and 800 xp. (We found plenty of nonviolent xp from other quests elsewhere though, so there's no real pressure.)

The Friendly Arms Inn: Third Floor
You can meet a gnome from Beregost named Landrin on this floor. She'll tell you that her house in Beregost has been overrun with giant spiders, and she gives you a quest to go and get some of her things from the house and bring them back to her room here at the Inn. 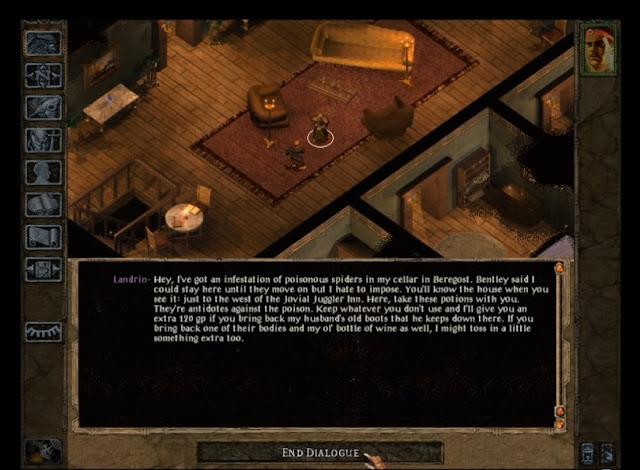 She'll also ask you to kill the largest spider in the house and bring back its body as proof. If you don't want to kill the spider, you can still go get her "Worn Out Boots" and bottle of wine, both of which you can take from the chests in her house in Beregost, and return them each individually for several hundred xp each, along with some gold. (If you resorted to a rougher indirect method like charming an assassin who tries to kill you in Beregost into killing the biggest spider for you, you can also bring the dead spider back for a few hundred more experience points and a little more gold— but it won't make a big difference in the long run, if you prefer to take the most peaceful approach.)

You'll also meet another humorous nobleman on this floor who will ask you to perform cleaning services on his pair of "Golden Pantaloons." You can either honestly return these for 100 xp immediately (since there's no way to actually do the other things he requests to the pantaloons),  or reportedly also steal them and combine them with some similar items in the expansion pack to Baldur's Gate II.

When you've done all you wanted to do at the Inn, you can go anywhere you want, but our recommendation would be to head north of the Inn to the farm and riverside areas near the bridge to Baldur's Gate (featured in our next post), since there are some purely nonviolent quests you can complete there for a total of over 3000 xp...