Following the two introductory quests from Mayor Gordar and/or Ran Hograd covered in the previous section on Winbreak Village, we now face a choice of paths, at least one of which will be needed to open King's Tomb: Hograd's Path vs Mayor Gordar's Path
Since the main storyline requires you to acquire all the relic earth stones, you'll eventually have to unlock the ancient King's Tomb in the Valley of Barrows, in order to retrieve the Relic Earth Stone found within the tombs. Neither the front gates or the rear gates can be opened with lockpicks or alternative means, other than by completing one of the two (or both) quest paths listed below, both available from Four Stones Village.
Unfortunately both of these paths involve fairly rare cases where even pacifist run players of Two Worlds will be obliged to indirectly cause a few imbroglios (even if no direct fighting is required). However, anyone who gets the level 15 Air spell Resurrection can choose to bring anything that gets bumped off back to life again as usual (or at least "back to undeath," in the ghouls' case). We tested both possibilities in our runs, and they both worked, so let your conscience be your guide when choosing to cause trouble for either the orc invaders, or for a gaggle of tainted undead lurching about the local cemetery...

Ran Hograd's path:
As we saw in the previous section, Hograd will engage you to find out what happened to his missing regiment that was transporting the orc commander White Head to Cathalon as a prisoner, and you discover the caravan destroyed in the woods with no trace of White Head. 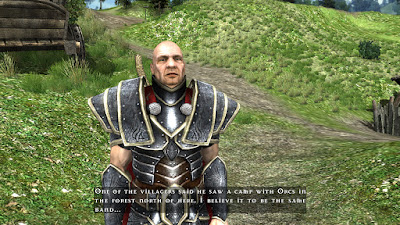 The next quest: "The Orcs' Camp"
After you tell Hograd the bad news about the caravan, he'll say he's heard word of an orc war camp somewhere north of the village, and ask you to go slay the orcs, and also to see if White Head is among them. If you choose Hograd's path, you'll find the orcs in the northwest, and  can try the usual array of indirect tactics like casting Chaos Rage to make the orcs fight each other, or using summoning spells, among other methods.
Note that if you arrive wearing the Orc Camouflage armor (see Cathalon section for details on how to acquire it), the orcs will accept you as one of your own until if and when you commit some offense...
If you opt for the interventionist approach, resurrecting any fallen orcs to fight on your side will also speed up the process (unless you want to wait until every hostile orc is dead first, so that you can resurrect 100% of them afterward and make the death toll come out a wash, without a single orc being forced to permanently shuffle off the mortal coil).
In sum: You don't have to get rid of them all to trigger the end of the quest, and you won't have to kill a single one yourself, but it's still a bit of a mess for those who prefer the path of complete non-violence. (Giving this path a miss and choosing Mayor Gordar's path is an option that's quite a bit quicker and easier.)
If you see this episode through to conclusion, however, you can go back to Hograd again, tell him White Head wasn't at the camp, and then get the quest sequence you need to open up the tombs:
"White Head"
"White Head's Hideout"
"White Head's Message"
Hograd will tell you that he has news that White Head has been spotted with his band of orc goons in the Valley of Barrows, and will ask you to go kill him, expressing his regret that he didn't get the chance to face him head-to-head himself. This time there's good news for both of you: When you find White Head, he won't attack you, but will instead ask you to become a messenger so he and Hograd can set up a head-to-head duel. 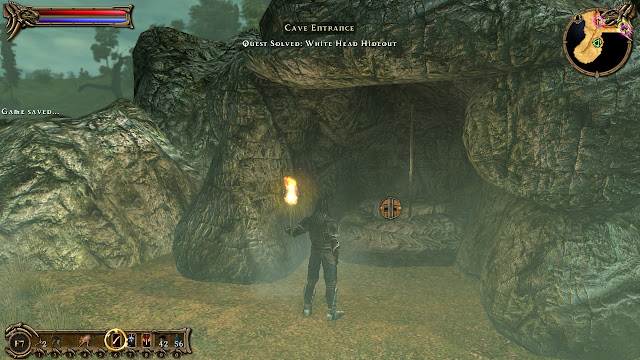 If you snuck into the caves making up a rear hidden entrance to King's Tomb in the Valley of Barrows, you will have encountered a big pack of savage orcs in the caves, but not White Head. After you talk to Hograd to get this quest, however, White Head will be there: 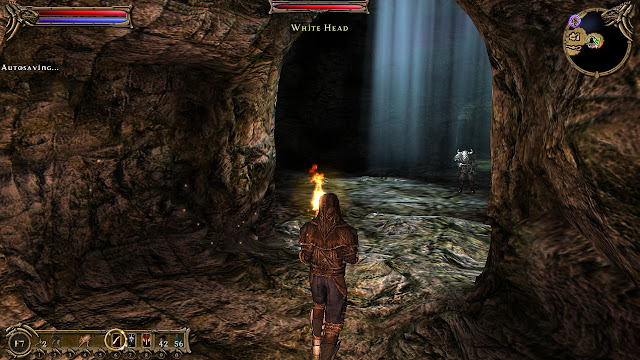 When you go find White Head, he'll bluster for awhile in human language, revealing that he and his goons are burrowing into the tombs to steal gold and gems. However, he won't attack you after he finds out about Hograd, and will  ultimately end up asking you to go relay a message to ask Hograd to meet him for a head-to-head duel. 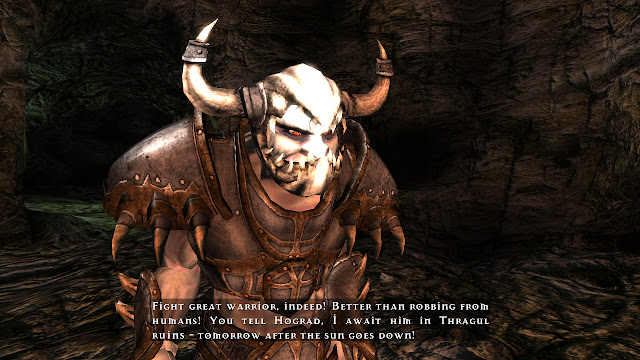 Hograd will be very pleased to accept this, and will send you back to White Head to announce his acceptance. When you do this, you'll be compensated for all the time you've spent listening to White Head by an impressive reward of nonviolent experience points, after which you can sneak back to the rear entrance in the caves and finally enter King's Tomb to go and claim the Relic Earth Stone.
(As far as we know there's no way to find out what happened in the duel between Hograd and White Head.)
If you don't want to deal with any of this, you can consider choosing Mayor Gordar's path instead:

Mayor Gordar's path:
Mayor Gordar (after completing "An Ogre in the Windmill") will next give the quest: "Taint in the Graveyard," asking you to go to the nearby graveyard and destroy a gaggle of undead that have risen there. If you don't do either this or Hograd's quest, you can't get Gordar to give you the key to the King's Tomb, since he'll never offer you his third quest unless you do this one first. However, Mayor Gordar's path is easier than Hograd's, since you only have to get rid of some undead, rather than an entire war camp full of bloodthirsty orcs...
The fastest direct approach would be to cast the destroy undead spell on the ghouls, but you can also opt to cast Chaos Rage to make the ghouls attack each other, and optionally resurrect any fallen undead to make them get up and fight on your side. (We also tried to get the undead to follow us out of the graveyard toward the bandit camp to see what would happen, but the undead were too lazy to follow us, and kept turning around to go back to the cemetery.)
(Note: One thing we didn't test was to find out if it was possible to trigger the quest reward without actually dispatching the undead, by just running in and out of the cemetery. Later on we discovered that this unlikely method did actually work in places like Earth Claw Tower and the Drakkar Desert, so it might be worth trying here too...)
Either way, once the undead are dealt with, you'll receive a skill point immediately, and then you can go back to the Mayor for some gold, and (more importantly) to receive the next quest: 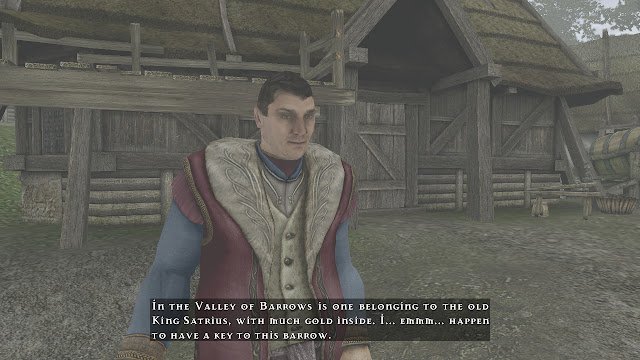 Mayor Gordar's key quest: "Satrius' Crown"
At this point, Gordar reveals something very interesting: According to his story, he was "given" a key to King Satrius' tomb as a reward for supposedly aiding the royal family, but necessity has now inspired him to make an exodus from the region. To do this, he proposes that you join forces, and that you go alone and use his key to enter the tomb, and steal the dead King Satrius's golden crown in order to raise funds.
This is one of the two possible ways to enable you to enter King's Tomb and claim the Relic Earth Stone. (If you do it this way, you'll be able to get in without the violent fiasco at the orc camp, and also won't have to listen to White Head's blustering.) 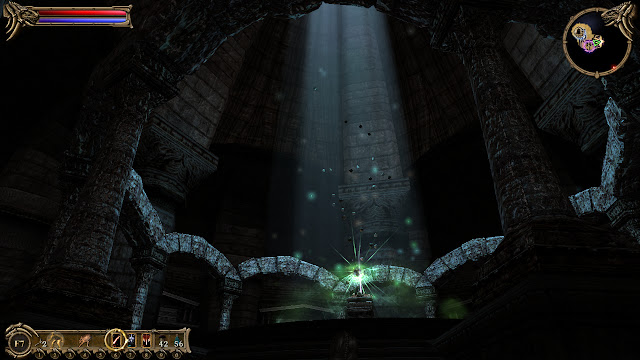 When you enter the tomb, you'll find the presence of undead in the darkness, and the relic earth stone radiating beams of light like something out of some old Germanic saga concerning magic treasures... However, while the earth stone is genuine, taking the crown off the king's barrow will reveal that it is not made of gold at all, but is apparently a "cheap imitation." 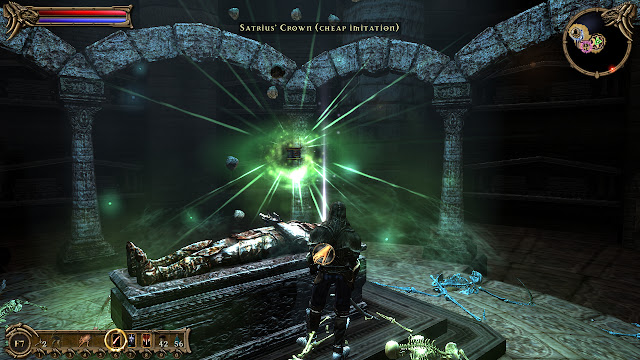 When you return to Mayor Gordar with this bit of news, he'll be infuriated, accusing the Prince of substituting the imitation crown, and calling the royal personage a "little cheat" and a "worm," exclaiming "he has ruined my life!" 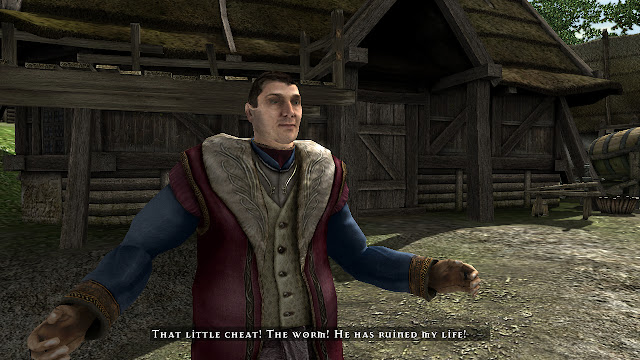 Gordar will hopefully overcome this bitter disappointment in time, but either way:  You have now succeeded in claiming the Relic Earth Stone.