If you ride southwest of Four Stones village over the grassy hills, you'll eventually see windmills on the hilltops, and find a village called Windbreak down the road a short way beyond them.
There are a good number of pacifist run quests you can complete here, a few of which are wrapped up with challenges that you'll eventually need to overcome in order to win the main campaign. 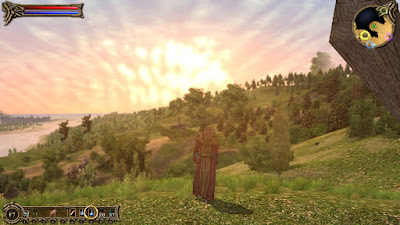 The villagers of note who give quests are:
Master Oldrin: This old Society mage is studying the strange insect-creatures called trachidis, and wants you to bring him one of their eggs. (If memory serves you can just go sneak or run into the lair of the Trachidis and grab the egg without having to kill any of the creatures. Once you have the egg, you can return it to Master Oldrin for some experience points, gold, and reputation with the Society of Mages.)

Annon Moha (the other one): This is the senior mage who claims that he is the original Annon Moha, and that the indistinguishably similar Annon Moha in Four Stones is a lying impostor. (Whether you visited Four Stones or Windbreak first to trigger this quest, see the Four Stones Village Guide for details on how to solve this quest for some nice rewards, without destroying either Annon Moha or anyone else.)

Mayor Gordar: "An Ogre in the Windmill"
Mayor Gordar asks you for help getting rid of a monstrous and dangerous ogre that has taken over a nearby windmill above the village.
This is a quest that you won't necessarily ever be forced to complete, but one we thought had a happier ending by stepping into the "grey area" a little by first luring the ogre into Windbreak Village, and then returning with the lv15 Air spell "Resurrection" to reverse his death, causing him to become permanently friendly to all:
If you approach the ogre at the windmill, he'll immediately start lumbering after you and trying to bash you to a pulp, but he can easily be led right back down the hill into the village square. 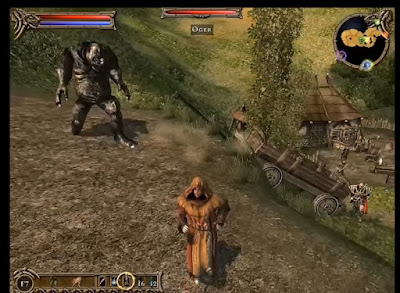 The village square is not only filled with mettlesome hunters with longbows, but also a visiting Paladin, and a seasoned military veteran named Ran Hograd (whose toughness is admired even by orc commanders, as you'll find out later). 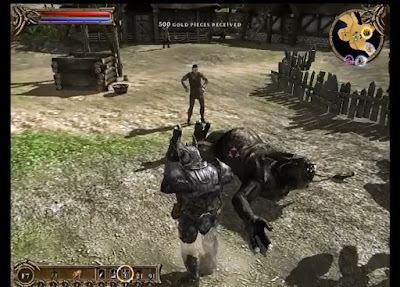 This results in a pretty short end for the invading ogre, but after he falls, you can return as soon as you have the Resurrection spell and bring him fully back to life, after which he'll stand up and lumber right back up to the top of the hill to continue enjoying his windmill.
None of the other villagers will attack the resurrected ogre, who will remain a permanently friendly ally, giving Windbreak village a free guardian as part of the bargain.
In our run, we also resurrected two wolves who initially tried to kill us when we were approaching the windmill, but ended up being pounded by the ogre while we were hiding inside the windmill to avoid fighting. After we cast Resurrection on the wolves too, they also became friendly and returned to the paths on the way up the hill. In the end, no one was dead, and Windbreak Village enjoyed not only a resident ogrish guard for their windmill, but also two friendly guard dogs keeping watch on the paths.
Note: Mayor Gordar gives two more key quests after this that are part of the main campaign thread to get the Relic Earth Stone, but we covered these under the section on the Earth Stone & Valley of Barrows.

Captain Ran Hograd: "Caravan"
Ran Hograd is a seasoned veteran who will tell you that he and his regiment were escorting a dangerous captured orc commander named White Head to Cathalon when they were ambushed by orc warriors. Hograd was injured and had to stay in Windbreak while the rest of the regiment took the prisoner to the city, but he never heard word of their arrival, and asks you to go find out if they arrived. 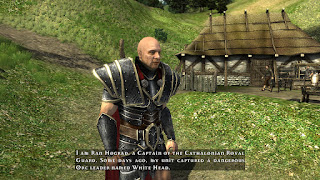 Unfortunately they did not, and by travelling down the wooded road toward Cathalon, you'll find the destroyed caravan still surrounded by orc warriors and archers. You won't have to fight, but returning to Hograd will trigger another quest involving an orc war camp.
The details about these are covered in a subsequent section: In order to solve either of the next set of quests involving both Hograd and Mayor Gordar through, you'll have to make a choice about whether to use "creative" pacifist run tactics to either get rid of some orcs, or dispatch some shambling ghouls, since one of the two quest groups must be completed to obtain the Relic Earth Stone needed to complete the main storyline quests...
Finally, just for completeness: A last villager whose quests can't be completed in any non-violent way we know of is Sigyor, who gives "The Woodcutters Camp" and "The Insects." Sigyor is a vigilant member of the community who wants you to exterminate first a camp full of bandits, and secondly a hive of Trachidis. (We don't blame him for his concerns, but neither the bandits nor the insects will ever actually attack anyone at the village, so we gave these two optional side-quests a miss.)