The savage armies of orc invaders have lain waste to the countryside all the way from Gor Gammar to the fringes of the disputed zones south of the River Gon, where the human defenders are holding them off at Quidnar and Cathalon. The battle at Hadeborg Castle is already over by the time your quest begins, and the castle is in ruins infested with orcs and ogres, some of whom are still guarding the stolen catapult triggers that the defenders of Cathalon fear they will copy to learn how to build their own siege technology...
Even further south, the still smouldering volcanic mount above Gor Gammar has turned the sky a dark red, mingled with the deathly energies of The Taint emanating from the black spires of the necromantic Fire Claw Tower...
At the foot of the volcano stands the fearsome stone fortress of Gor Gammar, where the orcs keep the Relic Fire Stone in a central altar wreathed in flames and surrounded by demonic warlike banners. Dozens of orcs swarm in these hostile environments both inside and outside the fortress, and inside the claustrophic and dystopian "Path of the Doomed" leading underneath the fortress walls...
Yet, despite all the above, this is actually one of the most easy "walkover" points in any pacifist run through Two Worlds I, thanks to a very useful asset called the "Orc Camouflage Armor." If you haven't already bought Orc Camouflage armor yet, you can get it from the Cathalonian armorer Creo. (See CATHALON section for the details, which will just require you to talk to a few key characters and pay a total price of 7,000 gold for both the armor and an authorization order from the sergeant-at-arms.)
More Optional Fun With the Orc Camouflage Armor:
If you're ever short of gold at any time after you obtain the Orc armor, donning it and taking care of the quests at Hadeborg and Gor Grammar while you also tour the orc-occupied countryside is also one of the easiest and fastest ways to accumulate a fortune in stolen orcish plunder: As soon as you put on the Orc armor, you can walk right up to every orcish treasure chest in the game and loot it right in front of them without even having to use the sneaking skill, and they won't raise any objections.

Since orc camps with treasure boxes are found all over the map south of the River Gon (as well as many other camps where the orcs have infiltrated northern territory), you can probably find more than enough treasure this way to buy whatever you want later on from the city merchants.
Other great places to visit to get the most fun out of your suit of Orc Camouflage Armor (which can only be put on and taken off again one time) include most of the orc war camps south of the river, and also the Deladkull glacier. The armor also makes creatures like Groms friendly toward you as well, opening up more possibilities for goblinoid tourism and caving back in the northern reeaches of Thalmont...
It isn't ever mandatory to get the Orc armor though, and you can still complete a pacifist run through these areas easily enough using only the sneaking skill, the Freezing Wave and/or Earth Chains spell, and of course the foundational tactic of just running away from enemies using the hero's superior running speed...

Now for the details on solving the two primary quests you'll find in these hostile environs :
THE RUINS OF HADEBORG CASTLE
The entire region of Garnowald south of the River Gon is covered in orc war camps and both small and large bands of orc warriors. After riding South of Quidnar, you will find the ruins of the impressive hilltop castle of Hadeborg standing in a blighted burnt plain scarred by war, and now surrounded with mists and strange beasts. 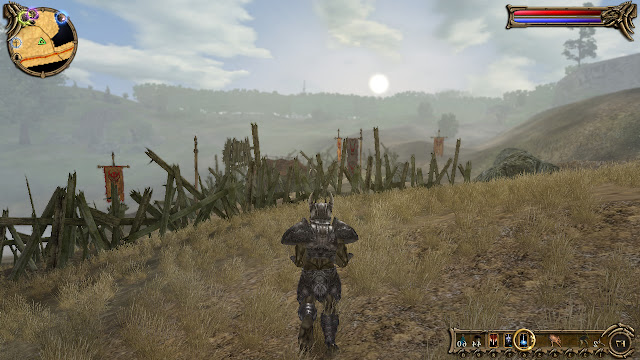 If you spoke with a Cathalonian soldier named Raul Dang in Cathalon, he will have engaged you to recover three catapult triggers from the orcs who conquered Hadeborg Castle. The Cathalonians fear that the armies of orc invaders will eventually study these catapult triggers, and will learn from their designs how to build their own siege engines, making them even more dangerous adversaries. 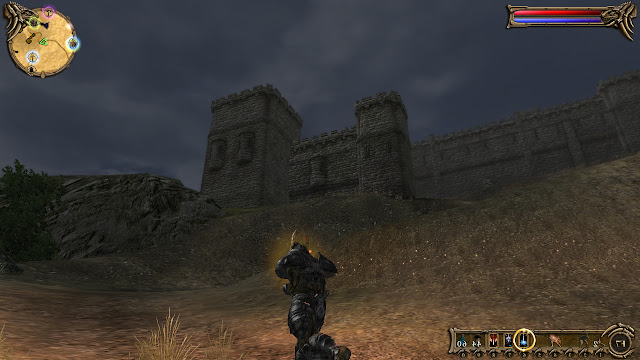 If you have the Orc Camouflage Armor, the required tactics will be more or less as follows: Walk directly up to the castle ramparts, walk up the main paths past the grunting orc and ogre warriors (who will accept you as one of your own and make no move to stop you), and walk directly into the castle, where you'll find some treasure to loot for your own use, along with the three catapult triggers.
There is even a teleport in the middle of the castle ruins near the triggers! Alternately, if you left your horse nearby, you can just walk back out the way you came in and ride away with no questions asked.

For those who prefer a more sporting approach:
We also tried sneaking into Hadeborg Castle at night to see if we could get in without the Orc Camouflage, but couldn't quite manage it even with the level10 (maximized) sneaking skill, since there were such thickly clustered bands of orc warriors and ogres in there that they repeatedly spotted us. (We're sure sneakier stealth players could have managed it though.) 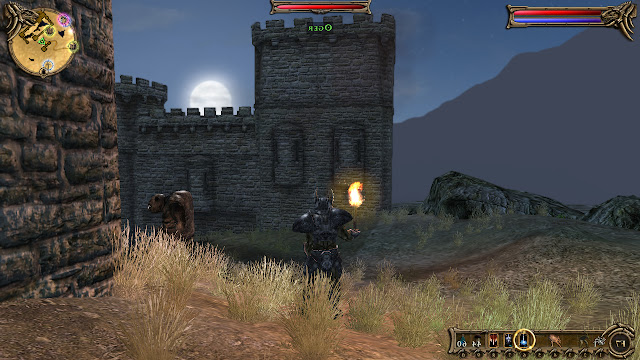 If you like a chaotic looney-tunes styled run-around, of course, you could also just run into the castle and cast spells like Freezing Wave or Earth Chains, perhaps thickening your defenses with some potions to boost defenses against orc arrows.
Either way, all you'll need to do is grab the three catapult triggers so the orcs can't use them, and escape. 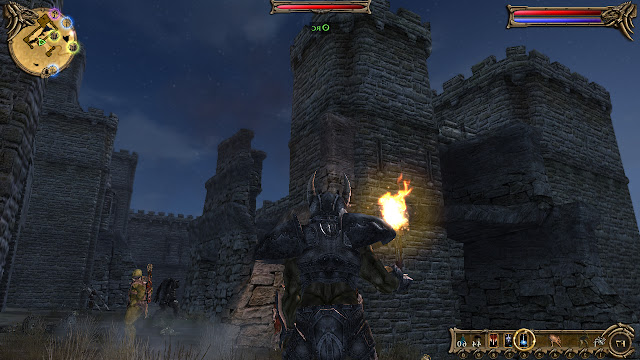 One major caveat: You shouldn't try to give the catapult triggers back to Raul Dang in the city of Cathalon until later on, after you're ready to take off the Orc armor, because the majority of human characters in the game won't recognize you when you're wearing the Orc armor, and many will even try to kill you. After you take off the Orc armor and go back to give the  catapult triggers to Raul Dang, though, he'll reward you with a solid sum of gold, experience points, and increased reputation with the Brotherhood for your heroic deeds.

FIRE CLAW TOWER & THE DEAD FOREST
You'll find Fire Claw Tower along the main road leading south to Gor Grammar, and the Dead Forest further to the east. There isn't much to do in either of these places on a pacifist run, as far as we know: Fire Claw Tower is a decidedly sinister spectacle to behold, but is just another ancient tower being abused by necromancers, with no quests to obtain or complete here.
The Dead Forest is another sinister major location: A huge forest burned to cinder and dead husks of huge trees, covered in smoggy fog, and infested with foul creatures like demonic octogrons and giant scorpions. This is actually a place you could visit in order to acquire the Relic Air Stone, but the more interesting and rewarding way of doing that is covered in the section on the Drak'ar Desert.
There is also one more interesting encounter with a non-hostile character in the Dead Forest, however unsuitable he may be for a pacifist challenge run: See the separate post regarding Asmohar in the "Necromancers" for details.

Now let's move on to the great orcish stronghold itself:

The Orc Stronghold of Gor Gammar & the Relic Fire Stone
Beneath the imposing sihlouette of the still active volcano, you'll find the imposing black stone fortress of Gor Gammar on a central road heavily patrolled by platoons of orc warriors and archers, flanked by more large stone constructs, and surrounded by cracks glowing with live maga flows. 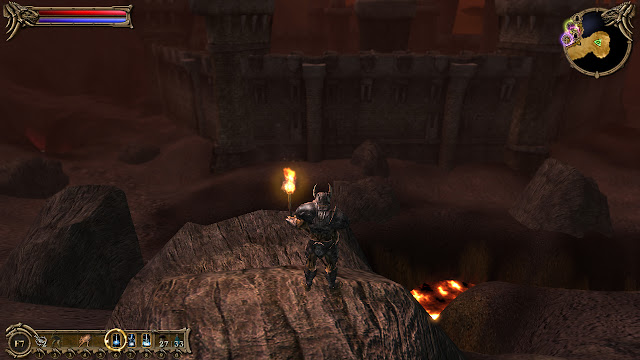 In our version of the game, wearing the Orc Camouflage Armor enabled us to walk in unopposed, but not to open the front gates. However, getting into the fortress is nearly as easy (and much more profitable) by going through the dystopian "Path of the Doomed":
This is a sinister claustrophobic passage which you can access by going a short distance east along the outer walls, and entering a black cave opening leading into ugly stone dungeon-like passageways and chambers with low ceilings. It's filled with grunting orcs, of course, but also well-stocked with orc treasure boxes. As usual, the orcs won't mind if you loot the boxes for yourself, as long as they think you're one of them while you're wearing the Orc Camouflage Armor.
Once you reach the end of the Path of the Doomed, weighed down by orcish treasure raided from their chambers below, you'll emerge into the impressive megalithic interior of the fortress and be able to go on a tour of the orc's habitations within.
After any optional sight-seeing, you'll find the Relic Fire Stone sitting in a central altar wreathed in flames and surrounded by demonic warlike banners. However, all you actually have to do at this point is walk straight up to the Relic Fire Stone and take it... 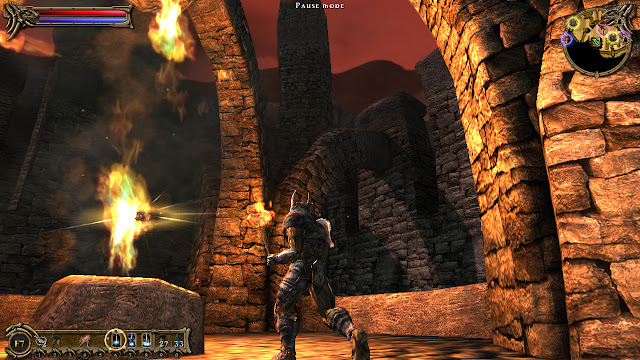 Doing so won't cause the orcs to attack you (unless you take off your armor, of course), and you can leave Gor Gammar just as quietly as you came in without any opposition from the orcs.
Of course, if this isn't sporting enough for you, by all means go ahead and give the orcs a run-around or use the sneaking skill to get through the Path of the Doomed using stealth, but even this shouldn't be too difficult since the paths are less thickly congested with orcs than they were at Hadeborg Castle. 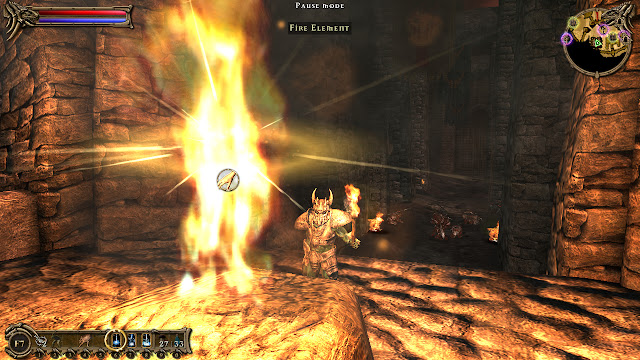 After nabbing the Fire Element and putting a healthy distance between yourself and the swarms of orc warriors in and around Gor Gammar, there's no vital remaining use for the Orc Camouflage Armor. However, if you're in the mood for a restful change of scene after all the fire-and-brimstone tourism here, we recommend also visiting the Deladkull Glacier back in Thalmont, and the snow caverns of "Ganga Cave." (The Glacier Orcs out there have some treasures to hand you as well, and they won't attack you either, as long as you're still wearing that Orc armor.)