The people of the Drak'Ar Desert are obliged to live a stoic life due to the harsh climate and many dangerous beings prowling the wastelands, though the desert isn't lacking in a harsh form of natural beauty either...
The furthest northern settlement in Drak'Ar is an Oasis with few inhabitants, and the larger settlement Xanthos is home to many more, but you'll find a total of three characters in these who will give you quests, along with a hermit living in the desert who will give you another. 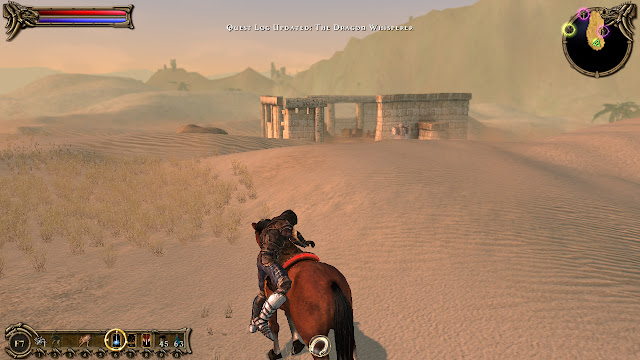 Most crucially: You will find the Relic Air Stone (needed to complete the relic and the main storyline) on the other side of the southern mountain range, inside a dragon's nest. It would also be possible to claim the stone by entering through the gruesome dead forest from the south instead, but there are no pacifist run quests there that we know of. Our preferred approach was therefore to visit the desert first, to gain the maximum possible nonviolent rewards from completing some interesting quests here. (Entering the desert before heading south will also lead you to the most scenic route to the dragon's nest, through a secret tunnel in the range...) 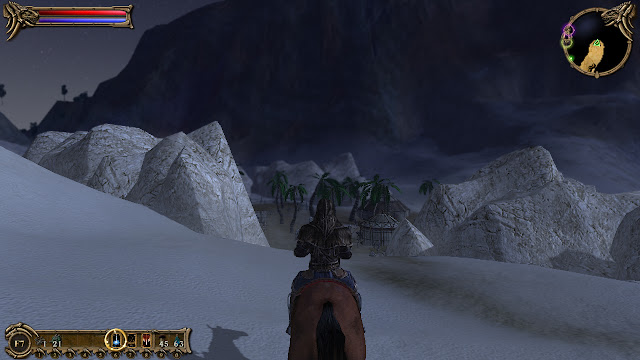 KIMAL OF XANTHOS & THE ALCHEMIST PAK'MUN:
In the larger settlement of Xanthos, you will find a woman named Kimal who tells you that Varns (aka Jackals) often conduct raids on the village, and that one of them fell into the well during one such fiasco, causing the water to become contaminated...
In order to purify the well water again, she needs a potion brewed from the old mage Pak'mun, and will ask you to make the dangerous journey for her to speak with him.
The good news: This journey isn't dangerous for you at all, since you can easily outrun everything, as always. The bad news: After speaking with Pak'Mun, you'll learn that you're going to need a scorpion gland in order for him to complete his potion...
Scorpions in Two Worlds aren't small scuttling things with deadly stingers, but are actually gigantic monstrosities about the size of buffalo. You won't be able to negotiate with the scorpions to get them to sell you a stinger, so you could throw in the towel here and hope someone less scrupulous comes along to save the village...
However, if the desire for a stinger to complete the quest outweighs your ardent opposition to in-game conflict, you could also do something like casting Chaos Rage on one of the scorpions to get them into a fight, and then cast Resurrection on them after first "borrowing" a stinger.
The two scorpions haunting the ruin directly below Pak'Mun's camp would of course be the obvious choices for this exercise.
If you bring Pak'Mun the scorpion gland: Pak'Mun will prepare a "Depoisoner" potion with the poison gland, and you'll receive experience points as a reward. You can then return to Xanthos and give the Depoisoner to Kimal, and she'll thank you and reward you with more gold and experience.
(Note: We also found lots of depoisoners at other times, and aren't sure whether you could actually give Kimal one of those as an alternative, if you want to try out a purist alternative that might save a giant scorpion's life.)

THILATUS OF XANTHOS vs the JACKALS
Thilatus is standing a little ways north of Kimal in the settlement of Xanthos, and he'll tell you that a dangerous pack of jackals are preparing to perform a raid too fierce for the defenders to withstand. He implores you to go and destroy the Varns to save the village, offering you rewards if you have the bravery and skill to do this.
We can't be sure, but strongly suspect that the Varns he is worried about won't ever actually attack the village, and that they would not be a match for even a handful of the warriors of Xanthos if they did attack— but that turns out to be a moot point:
After receiving the quest from Thilatus, you can ride south toward the Varn camp on your map. We weren't expecting to be able to do anything with this side quest on a pacifist run, but discovered an unexpected bit of good luck: While running into the middle of the Varn camp for some snatch-and-grab raids on the Varn's treasure, we were surprised by the sudden sounding of the "quest completion" fanfare, followed by a message stating we'd received an reward of one skill point just for running into the middle of the Varn village. Our quest book was then updated, informing us that we'd dealt with the Varns— even though the entire village full of them were still walking about alive and well, and we hadn't fought with a single one of them.
A cynic might call this an AI exploit, but we thought it was fair enough, as there is no way those Varns would actually have been able to destroy Xanthos even if they'd ever tried. We consequently wrote this off as a "reconnaissance" mission in which we were able to allay Thilatus' unnecessary pessimism concerning the menace of the Varn camp, and returned to give him the good news that the village was now safe. Reporting to Thilatus at this point will reward you with experience.
Also, if you mention the White Dragon to him, Thilatus may also advise you to speak with Ari Aldamor, the "Dragon Whisperer..."


THE DRAGON WHISPERER ARI ALDAMOR
As far as the main storyline quests are concerned, one of the most important characters you'll meet in the desert is Ari Aldamor, the "Dragon Whisperer."
You can find his hut more or less in the central desert slightly northwest of the center and west of Xanthos, near a stone ruin.
Aldamor will tell you the story of the White Dragon: It would seem this beast now rules the desert as a sort of tyrant. Aldamor says no one knows exactly why the White Dragon went bad, but that it murdered another dragon and was banished by its kind after they maimed it as punishment.
However, the White Dragon nurtured a venomous grudge during its exile, and hatched a plot to revenge itself by exploiting the power of a strange crystal:
The other dragons normally hid their eggs in nests in craggy lofts were the vapors in the air were deadly to intruders, but the White Dragon discovered that it could use the power of the air crystal to enable a group of Varns (anthropomorphic jackal-men) to sneak up to the eyries and steal the other dragon's eggs, which it now holds for ransom.
As you may have guessed, this strange crystal the White Dragon used on its minions to enable them to steal the eggs is none other than the "Relic Air Stone" which you need to solve your quest to restore the Relic...
As for the dragons' eggs: Each dragon can only lay one egg over its lifespan of centuries, so the dragons are now beholden to the White Dragon, who reigns over them as a sort of vengeful tyrant, according to Aldamor.
(The other denizens of the desert don't have much to say in the White Dragon's defense either, as you'll have already found out by visiting Xanthos or the Oasis.)
Aldamor suggests that if you could find out where the White Dragon has hidden the eggs it stole, then he could bring an end to its reign of tyranny by removing that source of its power over the other dragons...
At this point, all you have to to solve this quest is to travel to the southern fringe of the desert and explore, until you will find a pathway through the crags that leads into a foggy and smog-filled stone tunnel... 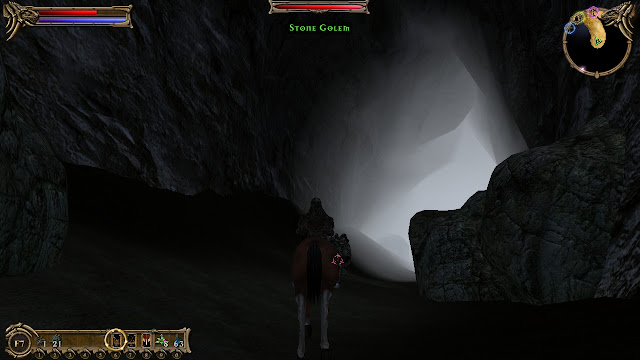 The tunnel winds down a steep sloping path underneath the crags, and emerges at the base of a sinister dead forest: Here you'll find the White Dragon's hidden hoard, which contains both the stolen eggs the dragon is holding for ransom, and also the Air Element, whose powers the White Dragon abused to carry out its theft of the eggs.
You can now walk right up and claim the Relic Air Stone, solving your own part of the Relic quest... 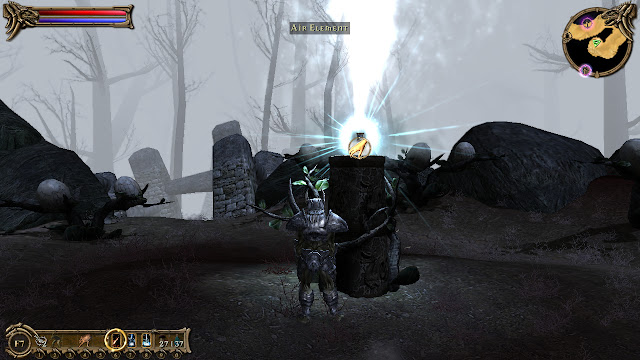 As for the White Dragon:
Unfortunately, at this point, we're not sure if there's any way to provide a happier ending to this drama than by either telling Aldamor about the eggs, or by just leaving with the Air element without resolving the rest of the dragon quests:
If you did the latter, of course the White Dragon will remain a tyrant over the desert, while if you do the former, the other dragons will go and kill the White Dragon for revenge...

The White Dragon is no match for the others, since he was maimed by them when they banished him a long time ago, and finding him slain is a bit depressing, even though it rewards the protagonist  just for witnessing the event.
Note: Since every creature that you resurrect with the spell remains permanently friendly to you after it gets revived, our hope was to bring the White Dragon back to life, but unfortunately we hadn't found the Resurrect spell yet when we first completed this quest.
Most slain creatures in the game don't ever disappear, but unfortunately we were disappointed to find the White Dragon's body had disappeared when we returned with the Resurrection spell.
But if we ever do another run through Two Worlds, we'll definitely make sure to have the Resurrection spell ready as soon as we reach this point, just in case we can bring a kinder and gentler White Dragon back to life, the same way we did with the Ogre at Windbreak Village, the orcs at Ashos, and a great many others...
There's one other theoretic alternative to the path we took:
PRANTAX'S QUEST: "Crystal Search"
This is an oasis (called alternately Kehar or Nahat, depending on which version of the world map you consult) where you will find a man named Prantax, who has an alternative quest to face the White Dragon:
Prantax will tell you that if you gather enough crystals and bring them to the Dragon's Lair, it will cause the White Dragon to eventually arrive there, so you can face it in battle... 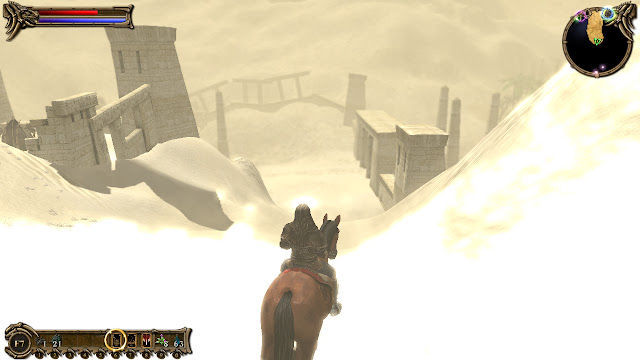 We didn't test this one out, but mention it in case other pacifist challengers want to give it a try and compare the rewards: After all, in places like Earth Claw Tower and the Varn's encampment in eastern Drak'Ar, we were surprised by being given quest rewards just by sneaking or running into each dangerous site, without ever having to kill anyone or anything there.
However, if that approach failed, you could also presumably just run away with ease, like you can from virtually every other foe in the game, including the much tougher Sand Dragons found throughout other parts of the Drak'ar Desert...