Now for the pacifist run sub-quests you can complete in the city of Ashos:
The first Ashos resident you'll probably meet as you ride up to the impressive circular gateway is a courteous soldier named Yorun Togawa, who will ask you why you're visiting Ashos, and warn you that most residents aren't especially receptive toward outsiders. He'll also give you a quest:
"Find Hoko's Sister"
Togawa wants you to find a woman he cares about named Hoko Sayuri, and help her with a problem.
You'll actually only be able to solve all these quests after a fairly complicated set of twists through other partially-related side quests from other characters, but you'll find Hoko Sayuri a short distance away in her house southwest of the main gates.
She'll reveal that her sister has disappeared, and suggest you ask after her by talking to an Ashos blacksmith who may have forged a second key to the Yatholen Temple so you can sneak in there and look for her sister.  While we will eventually have to enter the Temple for other reasons, the Temple turns out actually not to be involved in the sister's disappearance.
The blacksmith also isn't actually directly useful to solve this quest, but there is a sequential set of steps you'll need to set to get other NPCs to appear to eventually solve the mystery, so we'll look at his quest later on, starting with "Uchinao & Hidee Sakamoto: Feuding Sibling & "The Blacksmith's Will." 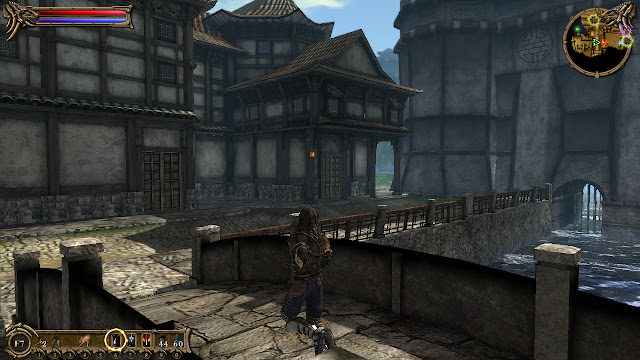 Uchinao & Hidee Sakamoto: Feuding Siblings & "The Blacksmith's Will"
Uchinao Sakamoto (found in southwest Ashos) is the Blacksmith that Hoko Sayuri thought might have a second key to the Temple, but he'll initially deny this. However, after you indicate that you might be willing to help him save his smithy from his allegedly greedy sister (who Uchinao claims is trying to cheat him out of inheriting the blacksmith his father wanted him to have), he'll indicate that he actually could give you a second key if you help him first. This will trigger the dubious-sounding quest "Get Rid of the Greedy Sister."
However, visiting Hidee Sakamoto will reveal a starkly different side of the story: Hidee is not as ignorant about smithing as her brother claimed, and also seems to have a Blacksmith's Will written by her father, confirming that he actually did mean for her to inherit the smithy. However, the Will still needs to be formally legalized by the Mayor, Masakore Murata. Hidee is afraid to take it to the Mayor herself since her brother is "a dangerous man," and will ask the protagonist to do it for her. (Note: We lost track of the exact sequence of quest-flags that must be set to get Murata to show up, but this conversation with Hidee Sakamoto might be required to make the Mayor show up at his house in northwestern Ashos. If you've reached this point, he should now be there even if he wasn't before.)
As for the dispute between siblings, two choices are theoretically presented to you at this point: Help Uchinao the brother, or Hidee the sister. For a pacifist challenger, though, it seems you can't make Uchinao change his mind by showing him his father's Blacksmith's Will, and we weren't interested in testing out any other ways to "get rid" of his sister for him— so we chose to help her instead of him:
Bringing Hidees' father's Will to the Mayor at his house will complete the quest to legalize the document, after which you can talk to Hidee again at her house to be rewarded with some gold and experience points. (As for getting a key to the Temple of Yatholen, you won't need the Blacksmith for this, since there's another much easier and more virtuous way covered in the next post on Ashos, by just talking to the Mage Kano Mizoguchi who has a different quest for you inside the Temple.)
At this point, you'll have access to the Mayor's quest sequence, which (if we're not mistaken) will be required in order to finish the investigation for Hoko Sayuri and Yorun Togawa:

The Manor of Ashos Mayor Masakore Murata:
Masakore Murata seems very courteous, but with a slightly unsettling edge despite his good manners. After he appears at his house (which will enable you to give him Hidee Sakamoto's will to solve her quest without any violence), he'll also ask you to do something for him: Visit a healer woman who lives in the bamboo forest outside the city, and get a package of herbal medicine for him.
The healer woman's name is Yaida Masae, but to finish this quest she'll unfortunately demand that you get rid of some of the dangerous Trachidis insect creatures that are stamping around in a nearby grove. You could choose not to do that, but we tested it out by casting Chaos Rage on the hostile creatures to make them attack each other, so we could find out what else this quest unlocked...
Talking to Masae again after this will cause her to hand over the medicine, but also to tell you the Mayor's secret: He is actually a werewolf who requires regular doses of the medicine to avoid transforming and committing murders. If you take the Mayor back his medicine he'll reward you with gold and experience, but at this point you'll make a disturbing discovery: Hoko's missing sister's red dress is found in the rear room of his house, indicating she was probably one of the mayor's victims when he transformed.
Conclusion for Yorun Togawa & Hoko Sayuri:
At this point, you can solve the quests Yorun Togawa and Hoko Sayuri gave to you earlier: If you go and give Hoko the dress and tell her you found it at the Mayor's house, she'll despair and ask to be alone.
However, you'll learn shortly afterward from talking again to Yorun Togawa that Hoko apparently went to the Mayor's house shortly afterward and killed him to avenge her sister's death, and probably also to prevent him from killing anyone else. 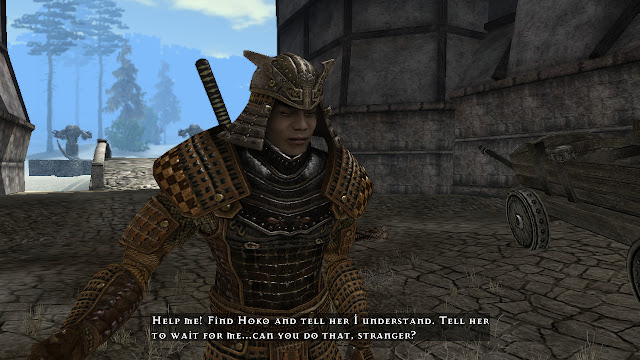 Hoko is now a fugitive as a result of this, but you can help her and Togawa bring about as happy an ending as can be managed by helping Togawa arrange for her to escape the region later (without having to arouse suspicion by leaving his guard post during his normal shift): 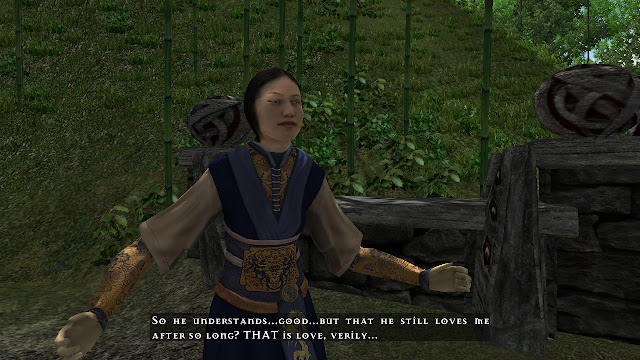 All you'll need to do to arrange this is to leave the city and find Hoko near the teleporter on the main road east of Ashos, tell her that Togawa will soon meet her to help her escape safely, and then go back to Togawa once more to receive his thanks and be rewarded with more experience points.

Merchant Guild
Now that we've brought about a happy ending for two virtuous souls in distress, let's go and rake in more cash and experience points with the help of our old friends' the Merchant's Guild:
If you were already on the Merchant Guild mission from Garrid Swan in Quidnar (see the separate Merchants guide for full details) to deliver the final package of Guild documents to Takashi Misuke, you'll find him in the Merchant Guild Hall of Ashos just northwest of the main gates.
When you give Takashi Misuke the Guild documents, he'll reward you and reveal that the documents were largely a test concocted by Guild leader Talor Ravinard, who wanted to test your loyalty. (Our interpretation was that this meant the Merchants never actually put compromising information in the documents to begin with, since they expected you to give them to the Giriza all along— but either way: The Merchants either don't know or don't care if you already showed the documents to the Giriza's spy Zatagi in Quidnar, so now you can cash in on the reward of even more nonviolent experience points, gold, and reputation with the Guild.
Takashi Misuke also refers you to Ravinar at the Cathalon Guild, saying that their leader is ready to give you an important mission:
Unfortunately, if you go there you'll learn that the special mission is just to go bump off Ravinard's arch-rival, the Giriza's head-honcho Aki Hosuno. (And if you already talked to Hosuno in Quidnar before turning him hostile by "liberating" his stolen goods, Hosuno will also have tried to hire you for the same price of 30,000 gold pieces to go and assassinate Ravinard instead. The good news for the pacifist challenger: Just ignore both murder requests from these two big-shots, and you'll still be able to go on enjoying your high status and improved profit margins with the Merchants Guild without any negative consequences. (As usual, you never need to give the "kill such-and-such" quest-givers a direct answer about what you really intend to do about their assassination requests, even if the quest shows up in your questbook.)
The above are only about half the good pacifist run quests to be found in Ashos. We'll cover the rest of the ones we found in the next post....