There are two army camps that you can visit along the banks of the River Gon, on either side of the city of Quidnar in the Soutyh. In both of these you will find various subquests that can be completed without any violence or killing: 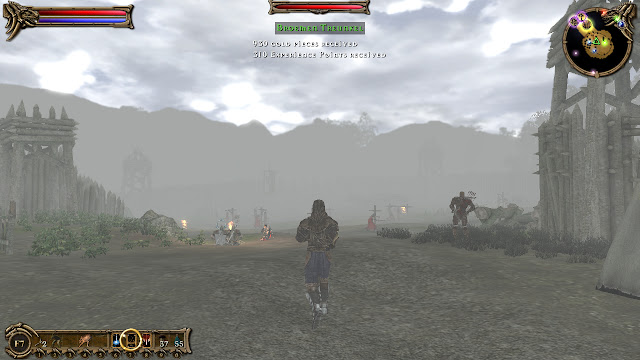 THE WESTERN ARMY CAMP
The commanders at this camp appear to have a problem with deserters. However, investigating both cases will reveal more nuances to both stories:
Evon Creos will give you the quest "A Deserting Soldier," sending you to find a deserter named Arion Theries, who you'll find at the Leaning Elm Inn. Rathern than intending to desert, Theries actually lost his armor gambling, and is convinced that he was swindled by a thief named Aristo Radeias.
We actually didn't manage to resolve this one in our run though: According to other Two Worlds guides, there should be a way to find Radeias at or behind the Leaning Elm Inn so you can help Theries out by buying back his armor, but in our version of the game Aristo Radeias never appeared anywhere, leaving no choice but to either ignore the quest, or to return to Evon Creos and tell him what happened. The latter yields some experience, but wasn't especially palatable since Creos stated that the mandatory punishment for desertion was to be 100 lashes. (Arion Theries would also not talk to a us a second time. Theoretically the swindler Radeias failing to appear might have been a bug that was fixed in later versions.)

Captain Spirk: "The Two Deserters"
Spirk is yet another army officer concerned with deserters, but he's even worse than Creos: He wants the two men accused of desertion murdered as punishment. As usual, you can still get the quest even with no intention of carrying through with the assassination...
If you travel up the river, you'll be able to find Wilcor Fox camped by the waterside, and he will shed new light on the story: Fox claims the men weren't deserters at all, but were actually set up by Spirk's treachery.
You can then ask Fox to give you his braid as a supposed proof of his death, then let him go free, and return the braid to Captain Spirk to lie and claim to have slain Fox. Spirk won't be able to tell you're lying, so you'll be rewarded with some gold for your efforts, while allowing Fox to escape.
THE EASTERN ARMY CAMP
This army camp is a bit more high-spirited than the Western Camp, and offers the pacifist challenger the following quests:

Marco Rivdal: "Theft of Some Underpants"
While the army commanders at the Western Camp are busy giving soldiers 100 lashes or hatching murder plots against their own men, the soldiers of the Western Camp have put together a collection to reward anyone bold enough to steal their base Commander's underpants from the riverside laundry camp. 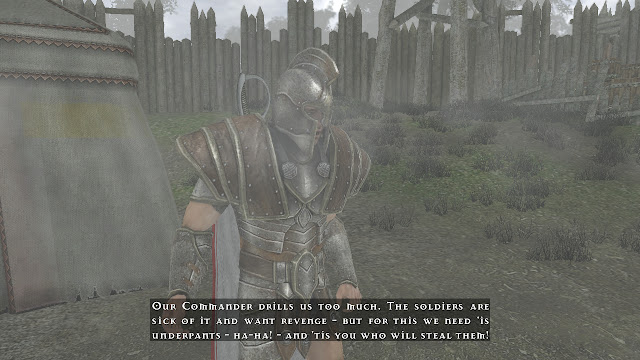 Their ultimate objective: To hang Commander Drak's underpants on a flagpole in the center of the camp, to avenge themselves for his draconian behavior. You can find Rivdal southwest of the gate, and if you assist them with this task, the soldiers will reward you with some gold for your efforts. (Of coure, you can ignore this quest if you think it's too mean, the gold involved isn't a big deal. If you want to meet Commander Drak before deciding whether to partake, see below.)

Rek Crooket: "Deliver a Letter"
You'll meet Commander Drak himself near the south wall of the camp, after a soldier named Rek Crooket (near the gate) engages you to deliver a letter for him. However, Commander Drak declares the letter to be a forgery, threatening to imprison you unless you agree to help him with a striclty confidential undertaking: Secretly bring him three bottles of spirits, without telling any of his men. 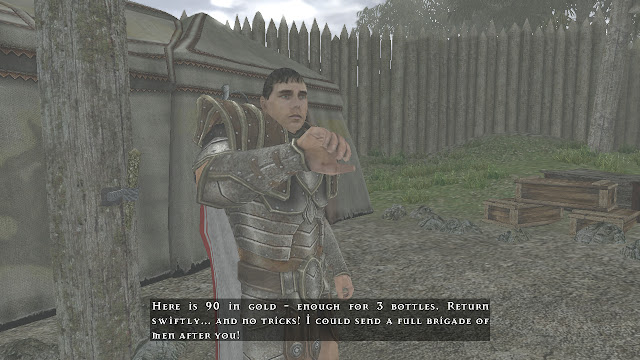 Commander Drak: "Three Bottles of Whiskey"
To accomplish this, you'll need to get the password from Rek Crooket, and then deliver the phrase to Samuel the Smuggler, in order to get him to admit that he has the merchandise for sale. After you purchase the three bottles from the smuggler, return them to Drak to be rewarded with some experience points. 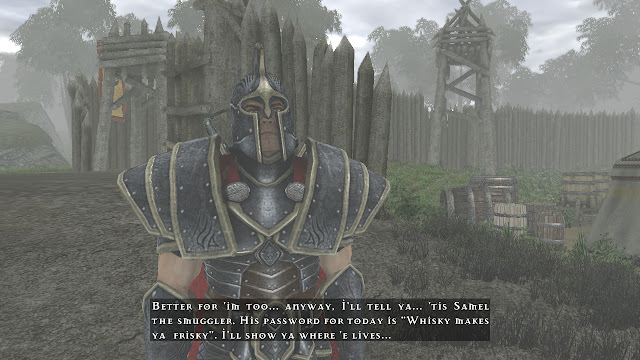 There are also other quests here that we didn't complete since they would require some type of violence:
Xyros will give you a quest to hunt down a strange and clever lone orc trapper, who is murdering sodliers form the camp by setting an array of deadly traps. The orc apparently initials his traps with symbols resembling a U and Y, so they call him "Ugly." You can find Ugly's camp fairly nearby around some boulders. (It might be possible to lure him back to the army camp to let the soldiers deal with him, but we didn't try it.)
Finally, Bodlo the camp cook will ask you to get some wolf hearts for him. We declined to do this (even if various wolves could be found already dead from skirmishes with soldiers, groms and orcs, or other NPC creatures), since we'd rather cast "Ressurection" on the pups to bring them back to life, instead of "harvesting" organs they'd probably prefer to keep for their own use.